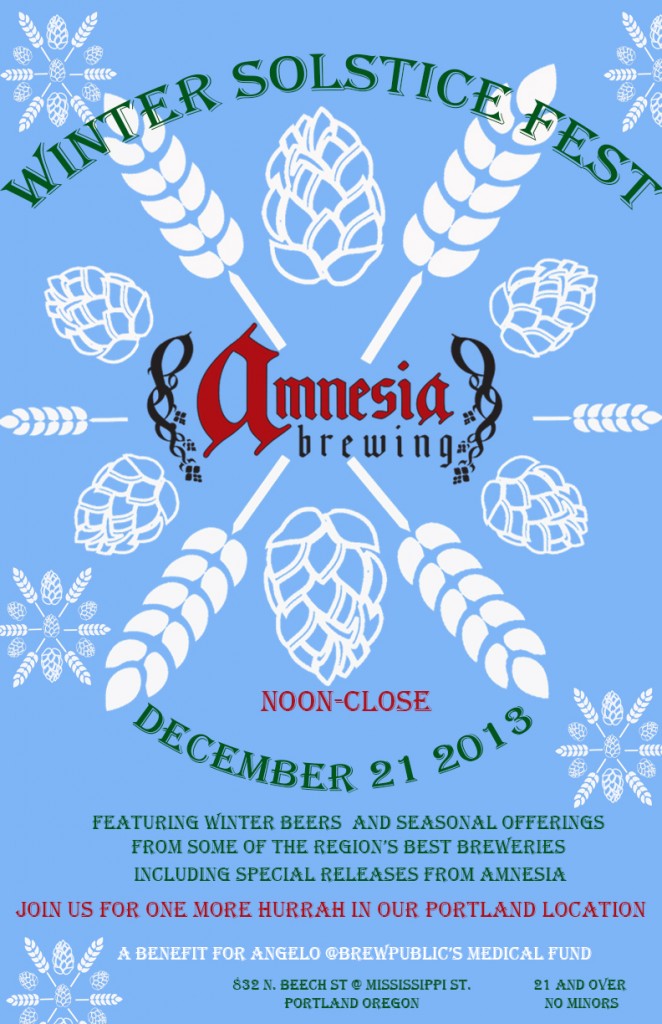 With just a couple weeks to go in 2013, Amnesia Brewing will be saying a farewell to their original location with a bang on Saturday, December 21st when they host their Winter Solstice Beer Fest. After more than a decade of serving hand crafted beer at their North Mississippi location Amnesia Brewing will move all operations out of their Portland brewpub to their new brewpub headquartered in downtown Washougal, Washington.

And since this is the season of giving, Amnesia Winter Solstice Beer Fest is a fundraiser for Brewpublic’s Angelo De Ieso II who was diagnosed with an in operable brain tumor in September. Despite generous help from many friends, Angelo still has hundreds of thousands of dollars of medical bills and ongoing expenses for necessary treatment.

A big thanks to Kevin King and Amnesia, all the brewers involved, General Distributors, CTX-Portland (Copytronix), Dora Designs, and most importantly all of you craft beer drinkers for your generous support.  Hope to see you at the festival this Saturday!

In addition to this line up of beers there will also be a number of tasty Amnesia Brewing special seasonal releases.

Other Details: Admission is $10 and includes a commemorative glass stein and five drink tickets. Additional tickets $1 each. Event is 21+ only/sorry, no minors allowed