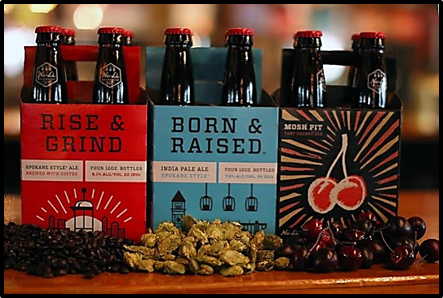 No-Li Brewhouse from Spokane, WA may have coined the phrase, Spokane-Style beers but regardless; this brewery continues to make a push in its farther reached distribution. Now the brewery is beginning to release more of its beers in appealing 12 ounce 4-packs. This is a trend that is most welcomed in an industry where the larger format rules supreme.

Now hitting the marketplace in this new packaging from No-Li Brewhouse is Rise & Grind, Born & Raised, and Mosh Pit. With No-Li’s 4-packs serving as a canvas to showcase the diversity, uniqueness and exceptional quality of Northwest ingredients, it makes perfect sense that the landscape of the Inland Empire will serve as home to No-Li’s new brewery.

“No-Li was Born & Raised in Spokane and it’s humbling to be a part of the evolving craft beer culture here,” says No-Li’s John Bryant. “No-Li is a platform for exploration in beer creation and we need to make more to explore! With each success we have, we see it as an opportunity to highlight what our hometown has to offer. Building Spokane’s first independent, regional brewery since Prohibition would be our way of paying homage to our roots while looking ahead to the future.”