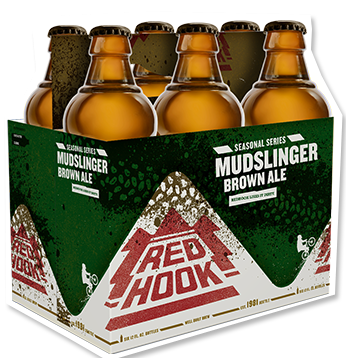 There’s something about brown ales this week. Around the same time we posted our Best of The Browns III post a few days ago, two notable Northwest breweries informed us that they would be releasing beers in this style. Full Sail’s first release in their new pub ale series is a brown, and Woodinville, Washington’s Redhook Brewery has also announced the return of their seasonal Mudslinger Brown Ale.

With a tagline of “Redhook STILL Likes it Dirty” (which we don’t really understand), Redhook provides the following information for their returning Mudslinger:

Woodinville, Wash. – In early 2013, Redhook will be bringing back Mudslinger Brown Ale, the brewery’s spring seasonal. Most recently called Nut Brown, this smooth, easy-drinking brown ale is making its return through April in stores and on tap nationwide.

At the risk of being accused of flip-flopping, Redhook has decided to bring back the Mudslinger name after the beer’s one-time release as Nut Brown last year. For the record, Redhook voted for the name change before he voted against it. But seriously, the whole mudslinging thing is pretty awesome – whether you’re mountain biking, talking trash to your buddies, or throwing a no-holds-barred mudwrestling contest.

“Mudslinger is Redhook’s take on the traditional brown ale style, and it’s the perfect beer for the spring season,” said Redhook senior brewer Alex Kopf.  ”After winning a silver at last year’s World Beer Cup, our team is really excited to bring back Mudslinger again this year.”

Dark in color, Mudslinger is refreshingly smooth and highly sessionable. It’s layered with rich malty aromas and flavors of chocolate, caramel, brown sugar and a hint of vanilla. At 5.8% ABV and 30 IBUs, Mudslinger will retail for approximately $7.99-$8.99 per six-pack. Locations selling Mudslinger can be found using Redhook’s beer finder at http://redhook.com/find-beer/.

Redhook was born out of the energy and spirit of the early 80s in the heart of Seattle. While the term didn’t exist at the time, Redhook became one of America’s first “craft” breweries. From a modest start in a former transmission shop in the Seattle neighborhood of Ballard, to the current breweries in Woodinville, Wash., and Portsmouth, N.H., Redhook has become one of America’s most recognized craft breweries. While Redhook has “grown up” during the past 30 years, one thing has never changed – Redhook is still brewing great beers like ESB, Long Hammer IPA, Copperhook, Pilsner and seasonal brews. Most importantly, Redhook makes sure to have fun doing it.   Redhook’s beers are available both on draught and in bottles around the country. For more information, visit www.redhook.com.