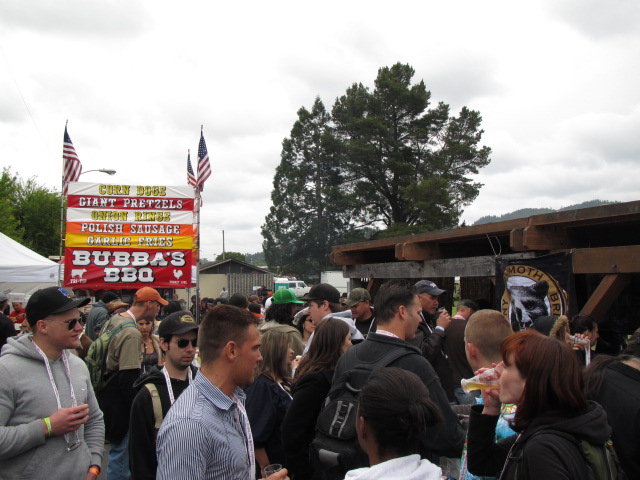 When our friends at Oakshire Brewing in Eugene invited us to join them for the this year’s Boonville Beer Fest, we couldn’t help but to say yes. Despite feeling a little beat down by the previous week at Eugene’s inaugural beer week, Boonville’s legendary fest was one we’d been eying for sometime, and since 2011’s marked the 15th annual occurrence of this event, it seemed logical that this would be the year we checked it off our beer bucket list.

Tucked in amidst looming apple orchids and grape vineyards close to a pristine stretch of giant redwoods, Boonville is the home of Anderson Valley Brewing Company (AVBC. You may recall our report from here in 2008. This visit was much rewarding). Anderson Valley is a true pioneer in craft beer on the West Coast and had been pushing out delicious beers like their signature Boont Amber Ale since 1987. 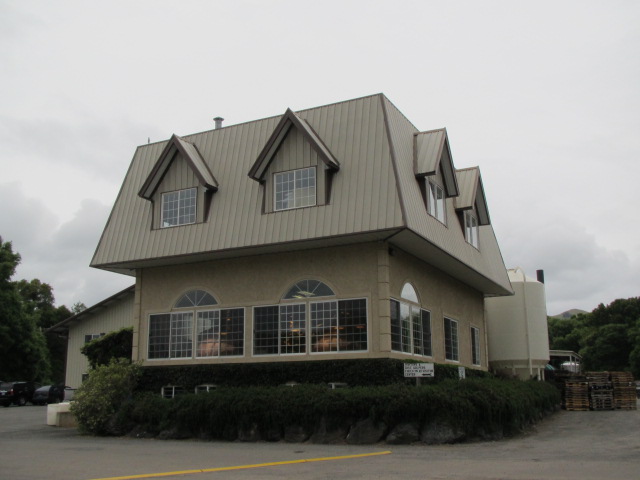 Located on a heavenly plot of land in Mendocino County about 20 miles west of Ukiah and about 115 miles north of San Francisco, Boonville is insulated by sharply winding roads and imposing hills of the Russian River watershed region. Just the trek from Interstate-5 to Ukiah along Highway 20 is rather daunting, though ultimately quite beautiful. At the confluence of Highways 128 and 253, the quaint town is easy to miss, but if you spend any time there, you’ll certainly appreciate it’s uniqueness. Known for the Boontling tongue, a dialect of the English language that is specific to the locals in the area, Boonville. Anderson Valley Brewing’s motto is “It’s bahl hornin'” which means “It’s good drinkin’ in Boontling. The dialect is believed to originate in the 19th Century and, in this small town of about 700 people, is quickly becoming archaic. Still, the gift shop at the brewery sells a dictionary of Boontling terms. Some less of these include: 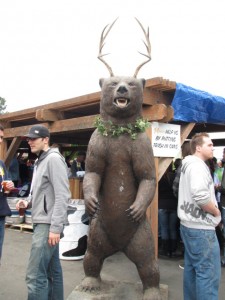 back-dated chuck – a person who is ignorant or behind the times
beeljeck – a rabbit: a blend of Belgian hare and jack rabbit
belhoon – a dollar
bloocher – a ‘bullshitter’; also, a masturbator
bucky walter – a pay phone
charl – to milk a cow
cheaters – glasses or spectacles
cow skully – a desolate area
dehigged – to be broke as in not having money
donicker or donagher – a toilet or rest-room
Frati – wine: Mr. Frati was a local vineyardist
haireem – a dog
heelch – all; everything: A greedy person when invited to share food and drink would take the heelch
high pockety – rich; having money
horn – a drink of liquor
horn of zeese – a drink of coffee
japer – a driver of a car
killing snake – to work very hard at something
Levi – to telephone
log lifter – a heavy winter storm
Muzz Creek – excess of water in gutters
nonch – no good; bad: blend of “not much”
old dusties – hell
peeril – to rain
pusseek – a female cat
rawncher – exceptionally large
seertail or sirtle – a salmon
shoveltooth – a medical doctor
skee – whiskey
skype – a preacher
tobe – tobacco
tweed – a child; a teen-ager
Uke – Ukiah
weese – a small child; an infant
wilk – a wild cat
zeese – coffee

On the Road – Thursday 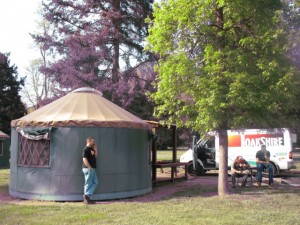 The Oakshire boys picked us up in Eugene at the Amtrak depot on Thursday afternoon before hitting the highway southbound. Brewmaster Matt Van Wyk had reserved a yurt for us just north of Medford in the Valley of the Rogue state park. Before settling in for the night on these grounds, we ventured into town to scope out the town. Our first stop was at Southern Oregon Brewing (SOB) where we caught up with SOB brewmaster Scott Saulsbury. Scott gave the crew a tour of SOB’s spacious brewhouse before tasting us up on some house brews. These included a fresh batch of their Na zdrowie Pils, Pin-up Porter, Woodshed Red, Nice Rack IPA, a seasonal pale ale, and even some of their barleywine that was still gracing the taps. All were exceptionally well built beers that absolutely hit the spot after being a car for sometime. 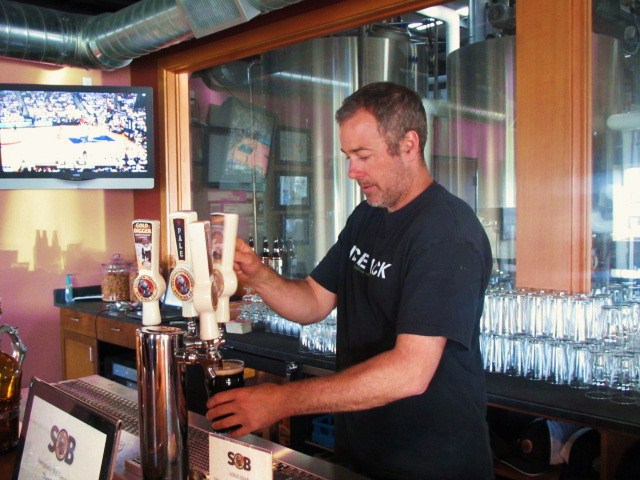 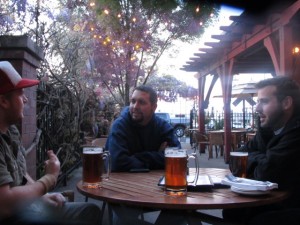 After we departed from SOB, we headed into downtown Medford where we visited Porter’s Train Station Restaurant and Bar. Situated in an old train depot, much like the one in Eugene where we arrived to begin our drive southbound, Porter’s caters to the carnivorous palate, offering cheap happy hour specials after 9PM, including 1/3 pound hamburgers for under $4. The main reason to love this place is the beer. Pouring on draught was Walkabout Working Man Pale Ale, Ninkasi Tricerahops Double IPA, Rogue Dead Guy, Caldera Ashland Amber, SOB Porter and more. The beers are available in a 10 ounce glass, 16 ounce shaker, 26 ounce schooner, or 60 ounce pitcher. After washing dinner down with a liter of Working Man Pale, we retired back to our yurt where we opened bottles of fresh Na zdrowi Pils (so fresh, in fact, they’d been capped just a few days prior according to the dating code on the box). This was a great way to conclude our first day on the road. We needed to rest up because we still had another six hours drive ahead of us in the morning.

Morning came soon enough, and we headed into Ashland, just 30 miles south of Medford, to meet up with more Portland folks. Arrangements had been made to make a morning pit stop after breakfast to Caldera Brewing just off the I-5 in south Ashland. Producers of some of Oregon’s finest ales and lagers, Caldera not only has a production brewery, but a taproom in downtown Ashland. They are also soon to break ground on a new brewhouse about a stone’s throw from their current production facility that will greatly increase their brewing capacity. 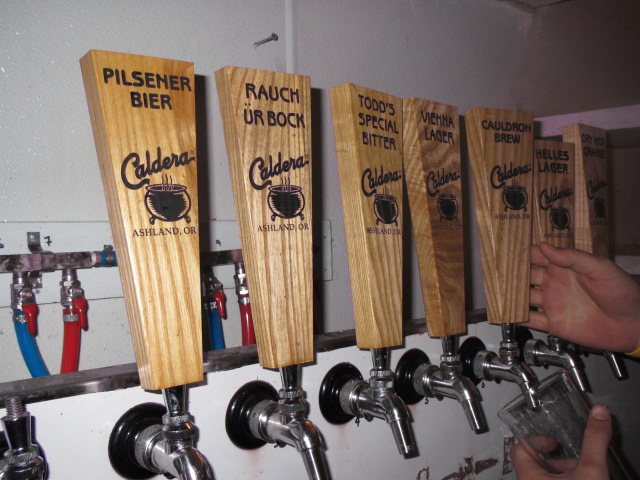 At Caldera’s brewery, brewer Adam Benson was at the helm. Benson, a seasoned professional of craft beer in Southern Oregon is a former Standing Stone brewer who now has a hand in developing some dank, floral, and piny brews, like a new Hop Hash IPA that he let our group taste from the zwickel. Employing a large resinous chunk of hops, this bitter and refreshing ale will soon be ready for tapping. Not just possessing an affinity for lupulin-loaded styles, Caldera also features a session-worthy Lawnmower Lager and a smoky award winning Rauch Ur Bock, among many others. 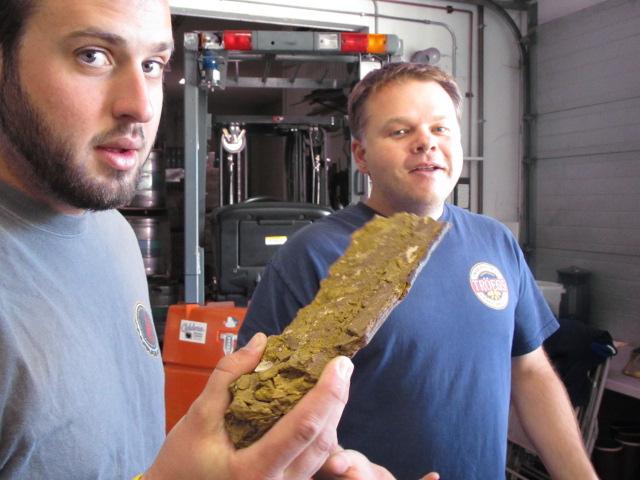 Our time in Ashland was not long enough. We quickly gathered ourselves and proceeded south through the winding, windy Siskiyou range that offered breathtaking views of the mighty Mount Shasta. 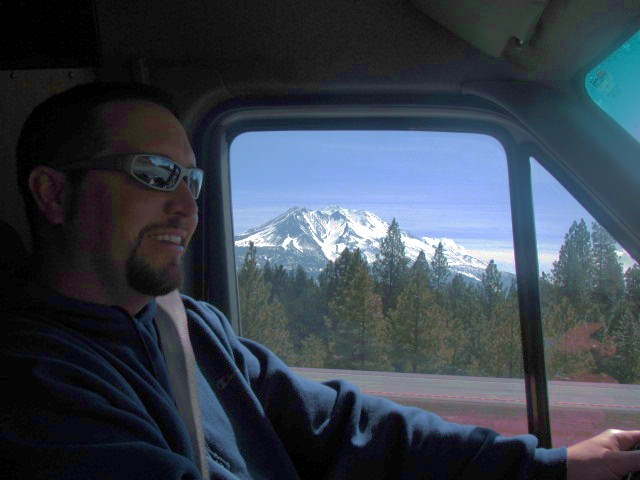 After a few more hours we descended upon the Jewel of Northern California known as the city of Redding. Here our group obtained supplies for our camping excursion, and some made a point to get food at a local In-N-Out Burger chain. 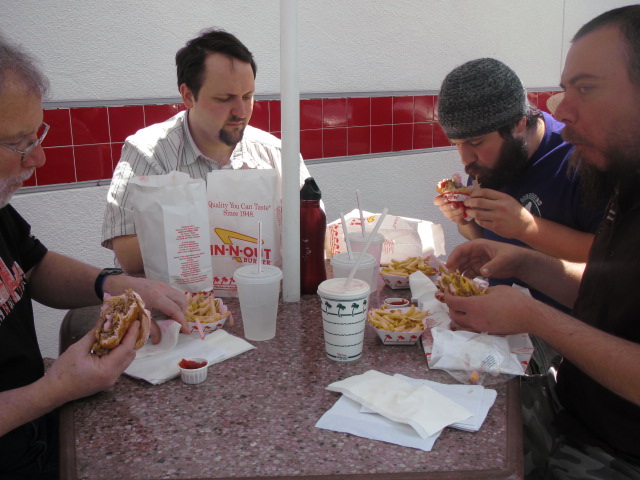 Gassed up and ready to roll, we hit the I-5 south for another 105 miles, then exited at Williams, CA and pushed west through the aforementioned twisting Highway 20. After one last stop in Ukiah, the seat of Mendocino county, we at last made it to our destination – Boonville, USA! 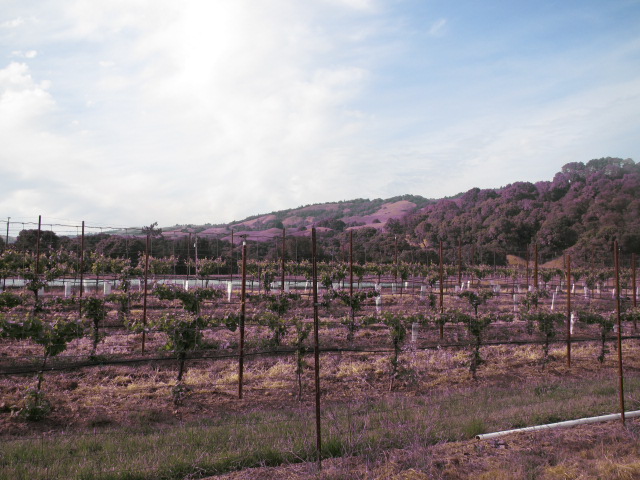 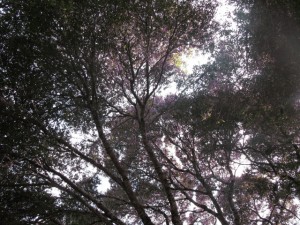 Large copper brewing vessels peered through the wide windows of the brewhouse, across the path from the gift shop and tasting room. A large plot of land surrounding Anderson Valley’s buildings featured a disc golf course and water treatment plant. Up over the hill by a portion of the course and underneath a hearty grove of oak trees is where the brewers camp grounds resided. Separate from the public campgrounds where the Boonville Beer Fest is held, just a half-mile up the road, this portion was filled with brewers from all over the place – primarily Northern California – who brought their wares to share with others in their trade. Our camp site was situated in the southern corner of the grounds by fellow Eugenites from Ninkasi Brewing and the Bier Stein. Tents were dispersed across the grounds as people enjoyed great beer, threw washoes, tossed Frisbees and built fires. 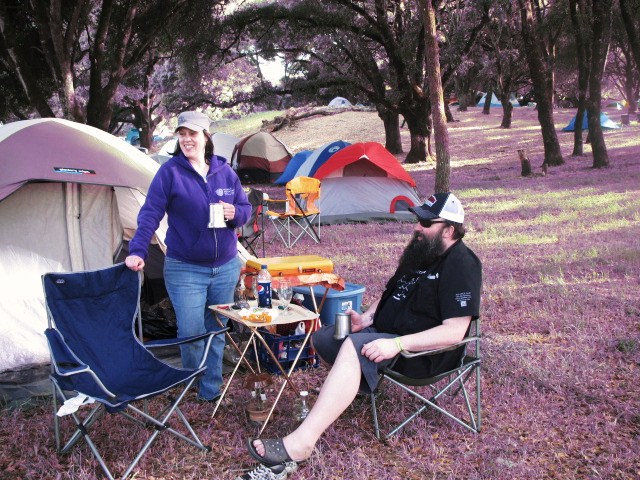 After sampling brews from several other campers and sharing some we’d brought ourselves, we wound down as the sun set and a marching band known as the Humboldt Firkin Tappers filled the night with instrumental renditions of well-known favorites ranging from those by Michael Jackson to Cee Lo Green. Back to the tent to crash before another fun-filled day would follow… 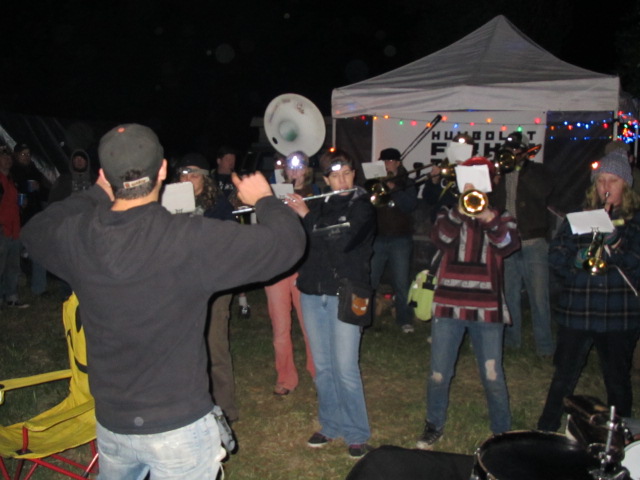 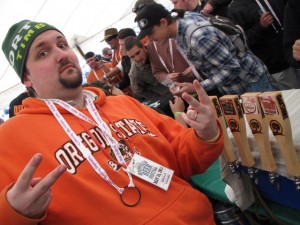 Saturday was the big day of the trip. It was that of the actual Boonville Beer Fest. We helped Matt load up the Oakshire van with beers that were stowed in AVBC’s large refrigerator, jockey boxes, and other promotional items, and jaunted down the way to the Mendocino County Fairgrounds site. After setting up and allotting shift to our sizable crew, we took turns venturing about the space to sample different breweries’ goods. Some highlights included (but certainly not limited to: Bear Republic Cafe Racer 15, Sierra Nevada Bourbon-aged Two By Four, Ballast Point Sculpin IIPA, Russian River Erudition Brett Saison, Moonlight Gruit, Dogfish Head Theobromo and Palo Santo, and Firestone Walker 14th Anniversary blend. 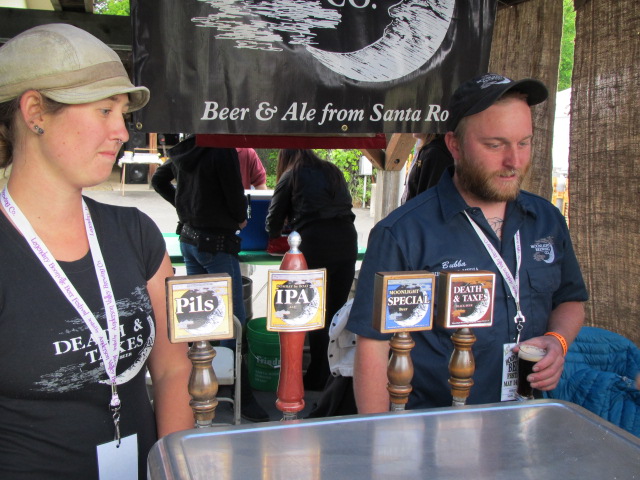 The Boonville Beer Fest, though lasting just five hours (noon until 5PM), witnessed a lot of heavily intoxicated people. California’s looser alcohol laws allow for servers to drink while they pour. Though we didn’t see many inebriated servers, the fest was tickets-free, which meant a 50 entry fee gets patrons a four-ounce plastic taster cup and all-they-can-drink. Such debauchery can unfold like did at last year’s Mountain Brewers Beer Fest in Idaho Falls. By 5PM, there were some seriously wasted individuals, but in all, most folks maintained their composure. We had to, there was more beer to be enjoyed back at the campgrounds. 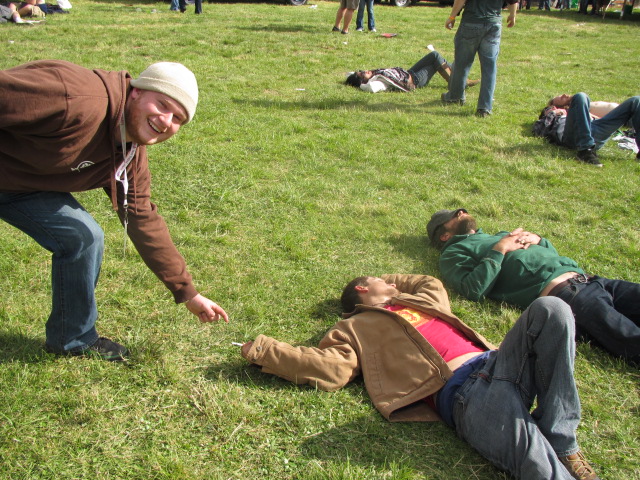 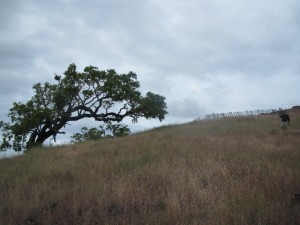 Before dark, Matt and Brian from Oakshire hiked with us across the stream at the foot of the campsite before ascending a stony hill overlooking the grounds. The view was great, and it was a terrific way of taking in our last evening in Boonville. When darkness arrived, so did the rain. And it didn’t quit. Fortunately several standing tents and campfires kept us warm, as did a bottle of Hellshire I Barleywine that Matt shared with us. As people headed to sleep and sought refuge in tents, the beers became less and less. Fortunately the Ninkasi crew had some Believer Red Ale to share. Beers from Lagunitas including Hop Stoopid and their signature IPA quenched throughout the night. It was a wonderful time. However, waking up at the break of dawn and breaking down our sites in heavy rain before a ten hour drive north wasn’t a highlight. Still, our time in Boonville was filled with much Bahl hornin’ good times we’ll not soon forget. 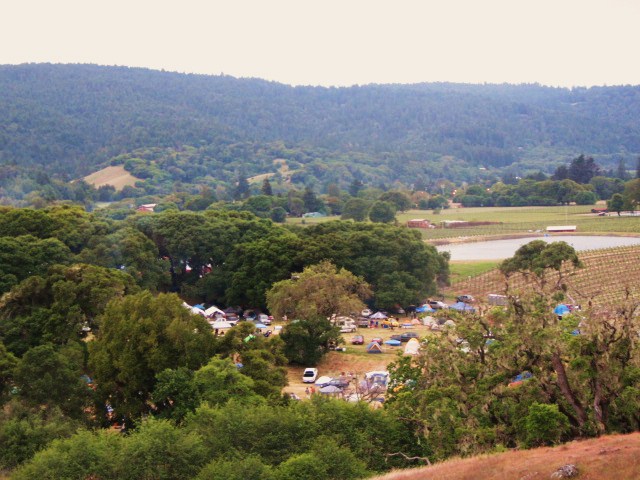