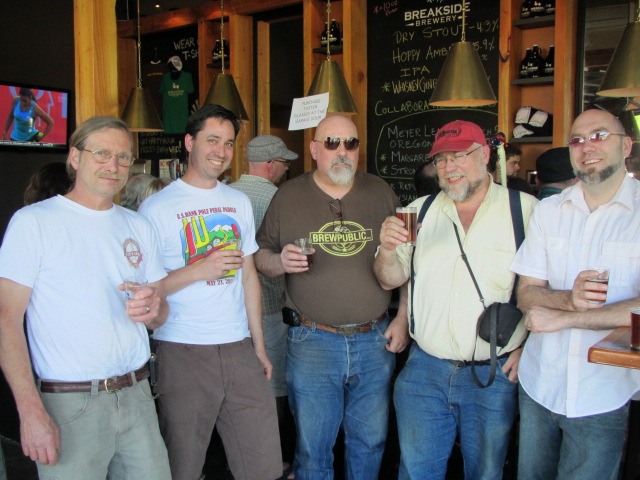 The past weekend in Portland was a great one. Not just because of the bounty of spectacular beer happenings, but it was also in part due to the summery weather that at last arrived. As the hop bines darted skyward from such prodigious warmth, little time was allowed to fritter away any opportunity to take full advantage of what could register as a fleeting season. Here we will broach upon some of our weekend’s beer-related highlights with animus of returning with more details at a later time. 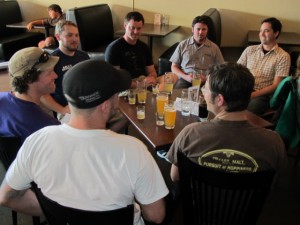 Friday broke ground on a memorable Beervanian weekend with a sample of wares to be staged at the first Portland Fruit Beer Festival coming on June 11 and 12 at Burnside Brewing. Organizer Ezra Johnson-Greenough led us through a miscellany of festival highlights that characterized the spectrum of what the anticipated event will offer. Even cooler, almost every taster presented was discussed and formalized by the brewer whom had a hand in its conception. This included Upright’s Alex Ganum, Beetje’s Mike Wright, Block 15’s Nick Arzner, Fort George’s Jack Harris, and Burnside’s Jason McAdam. Several members of Portland’s beer media were in attendance to have their palates engaged and intrigued. The likes of many of these beers have not been seen before, and any one favoring a spirit of invention and culinary artisanship should not forgo this year’s inaugural cornucopia. 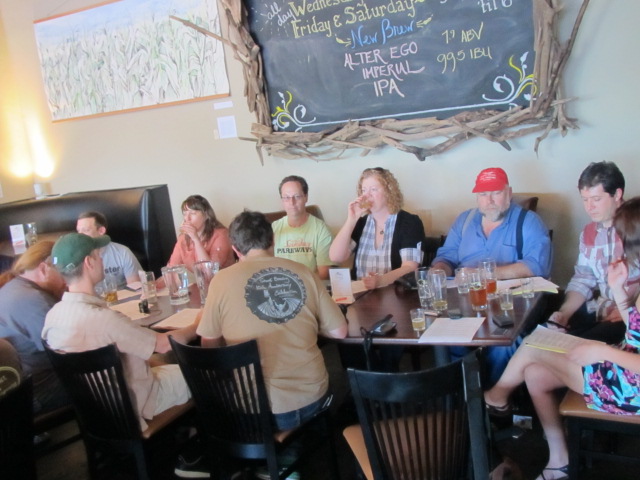 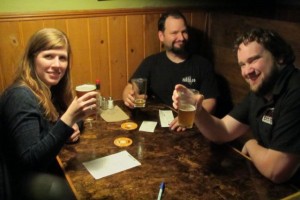 Following this dynamic microcosmic tasting at Burnside Brewing, we eventually made our way to Portland’s Montavilla District where Roscoe’s Pub hosted Fort George meet the brewer night with head brewer Spencer Gotter. Gotter and his affable pooch Sasha along with Fort George Portland rep Tim Ensign raffled off brewery swag to participating quaffers. In addition to a newly released wildrice IPA coincidentally dubbed Roscoe’s IPA, the Astoria brewery also provided kegs of 1811 Lager – a perfect session beer with some hop punch – and a boldly bourbon-slapped Cavatica Imperial Stout. As can always be expected, Roscoe’s had a plethora wide variety of craft options from near and far ranging from Mikkeller to Flat Tail. It was a fun night out with many familiar faces tipping back their best suds. 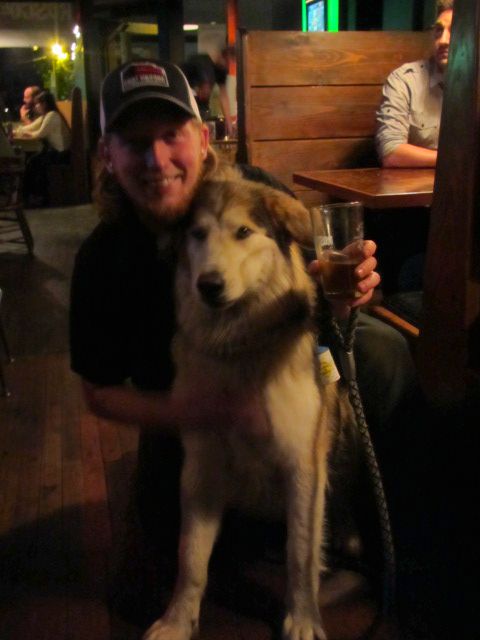 This day lived up to the weatherperson’s forecast of hottest day of the year thus far. Mid to upper 80s with a slight breeze provided Puddletowners with some well needed vitamin D. In addition, we also found the quintessential vitamin B (+ double E, R). 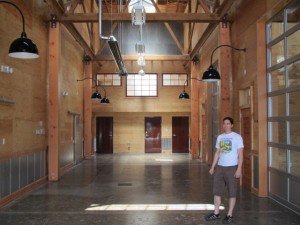 After getting a glimpse at Beetje Brewing‘s future digs thanks to founder/brewer Mike Wright, we headed with Wright across the Columbia River to downtown Vancouver, Washington. Here fabricator Colin Preston of Practical Fusion was delivering a brew system to Mt Tabor Brewing. The same 7-barrel system is also being build by Preston for Beetje Brewing. In fact the Mt Tabor set-up was original slated to be Beetje’s but as it turned out, the microbrewers, working together, found that it made more sense to go ahead with it with since the Vancouver brewery plans on having beer ready to flow sooner (perhaps by mid to late summer). After getting fermentors installed later in the weekend, Mt Tabor will be ready to finish the rest of their build out of the brewhouse and adjacent tasting room. Mt Tabor founding brewer Eric Surface, much like Beetje’s Wright, has been tirelessly plugging away at realizing his dream while maintaining a day job. It goes to show the amazing fortitude one will exhibit when the pressing need for good beer is in the equation. Also helping with the installation of Mt Tabor’s new brewhouse was Thomas Poffenroth and Devon Bray, two accomplished homebrewers from Vancouver soon to turn pro under the Loowit Brewing moniker. Poffenroth and Bray anticipate finding their own space in close-in ‘Couv soon. During this day they shared a growler of their delicious Shadow Ninja IPA. It would be an understatement to say how nice it is to see small brewers and business owners working together for a common cause. In this case, it would be the most noble of causes – craft brew. 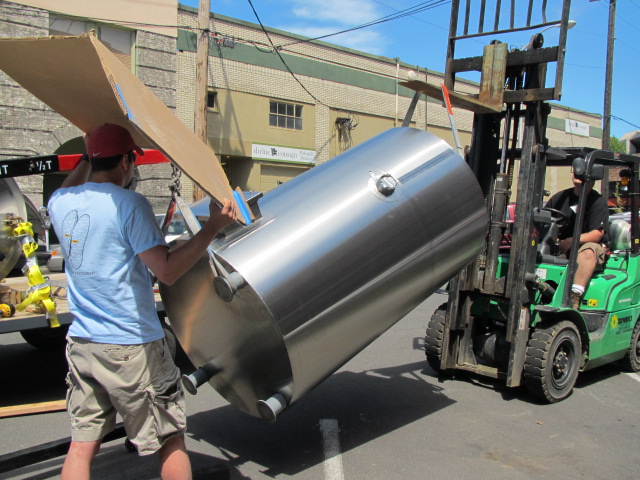 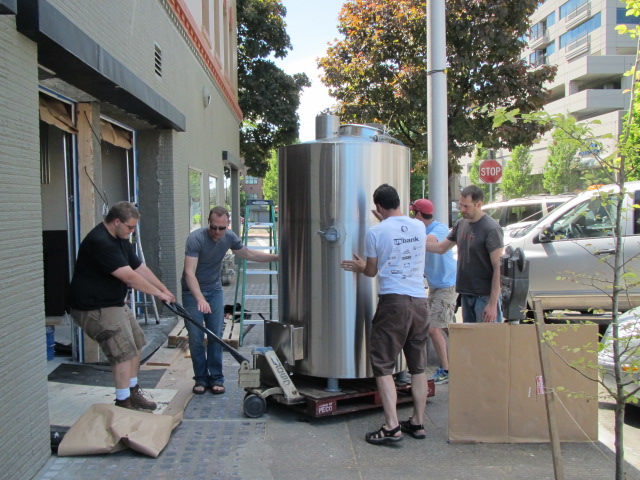 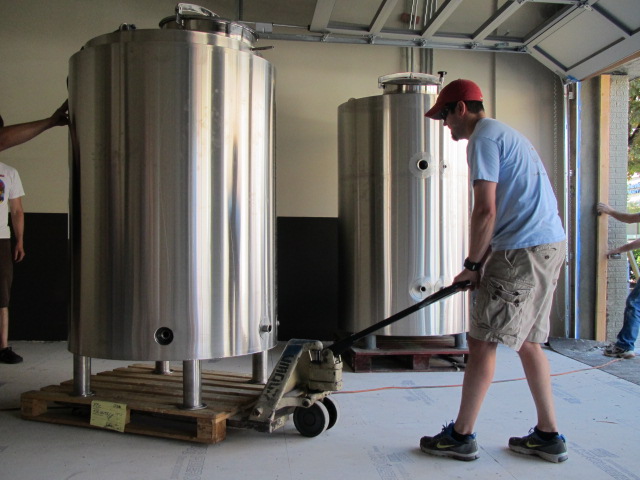 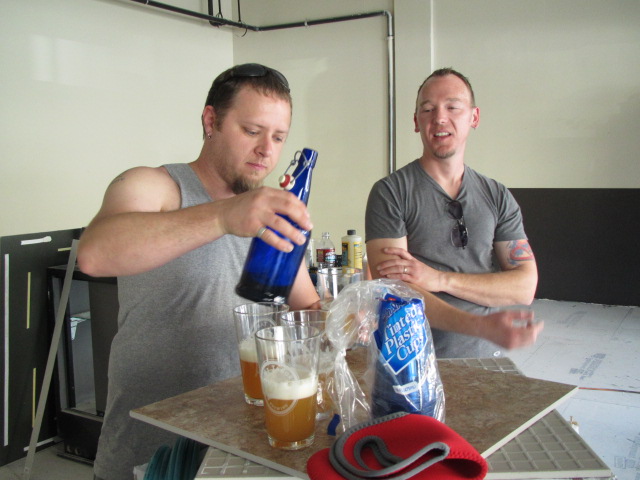 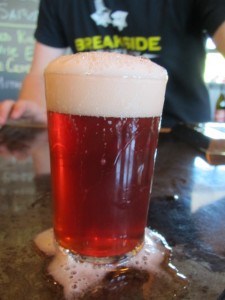 Back across state lines in North Portland, we made it at our most anticipated event of the weekend – Breakside Brewery‘s Collaboration Fest. Here, Brewpublic’s Margaret Lut, (also the founder of LOLA [Ladies of Lagers & Ales]) was debuting her Margaret’s Beersch, a unique ale brewed with gratuitous quantities of beets – both roasted and juiced – and a fair quantity of ginger (Margaret will now be referred to as a” beet writer”). Also on tap was a noteworthy Steam Beer Common Ale designed, in conjunction with Breakside imagineer Ben Edmunds, by Oregonian beer columnist John Foyston. This beer was perhaps the most “normal” of the lot, as the others featured included a super-sessionable Meyer Lemon Kolsch conceived by nationally known craft beer purveyor Lisa Morrison (this beer was perfect for this warm and sunny afternoon), and a magnificently complex Imperial Saison (9.4% ABV) conceptualized and co-opted by the staffers at Saraveza Bottleshop and Pasty Tavern. Ben Edmunds worked hard to facilitate these beers. Moreover, he did so with a seeming effortlessness and selflessness that really shined through in the success of this wonderful event. Cheers! 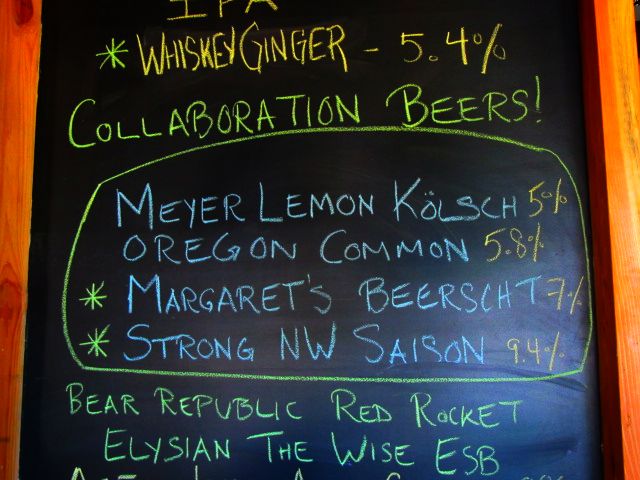 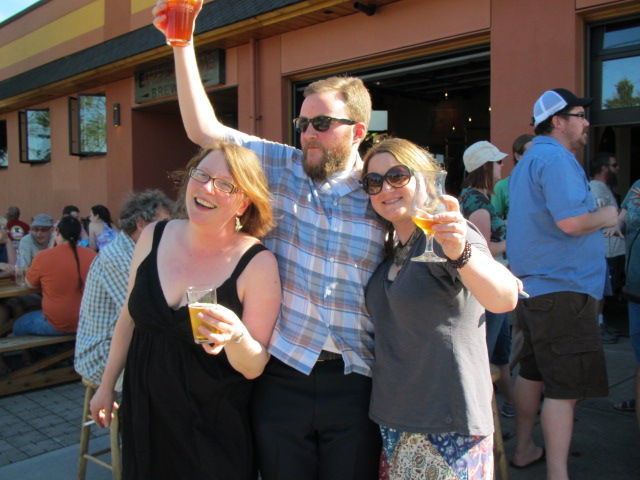 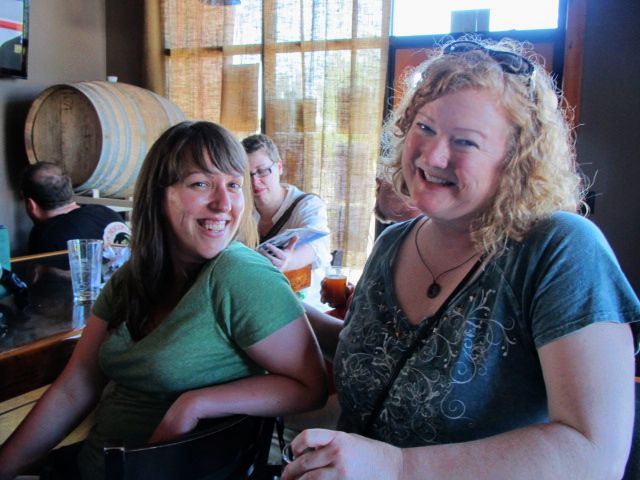 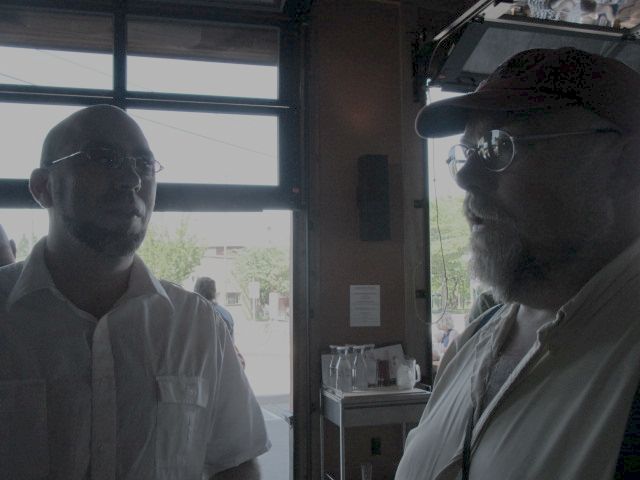 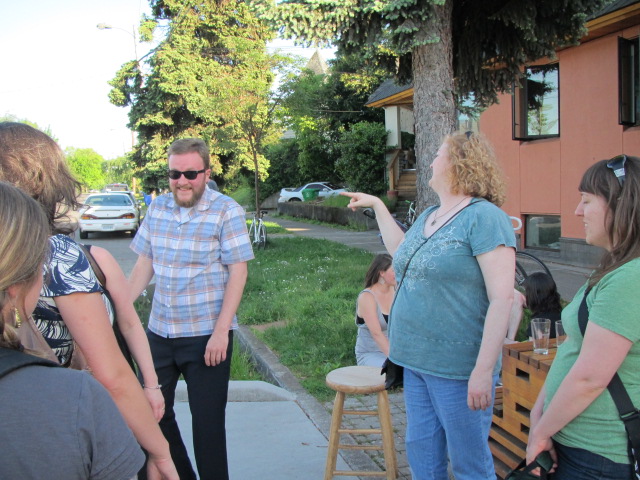 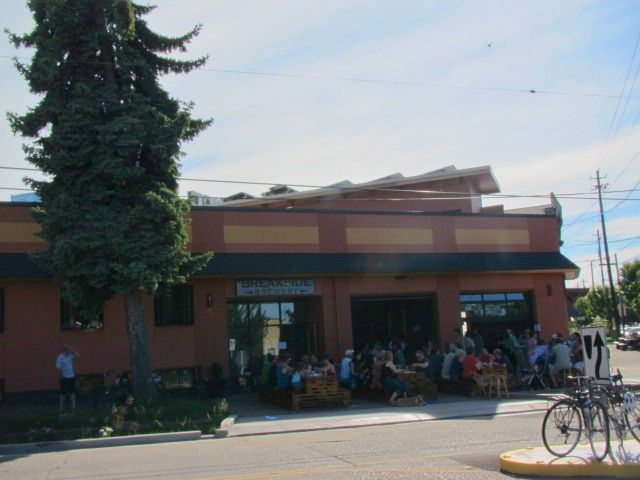 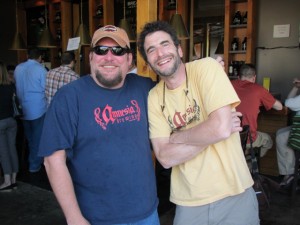 After getting at least two tastes of each Breakside collaborative brew, we headed over to Amnesia Brewing, where word had escaped that a swarm of beer lovers had clustered. On this day the microbrewery was hosting their first annual Single Hop Fest. It appeared that Double Mountain of Hood River had won the people’s heart with their Cluster F*#%, a beer made entirely with the hop of its namesake. Unfortunately, some of us missed out on this storied beer, but there was still plenty of highlights to go around. Both the Pilsner and Porter from Caldera were exceptional, as were two Amnesia offering – a superb Altbier and a summer appropriate Cream Ale dubbed “Cream of the Crop.” Another highlight was Migration’s Black Hearted CDA. 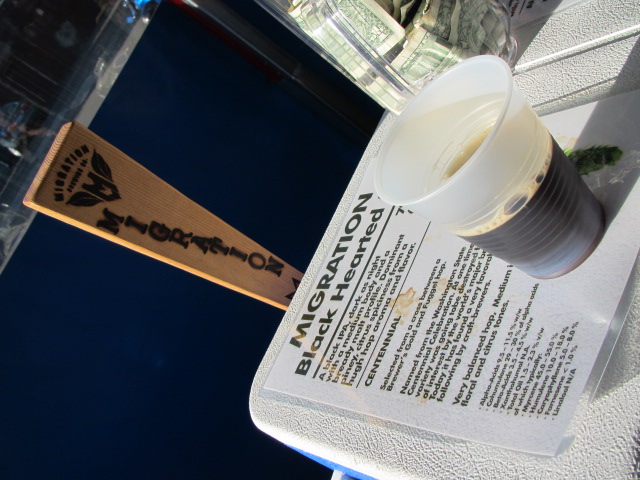 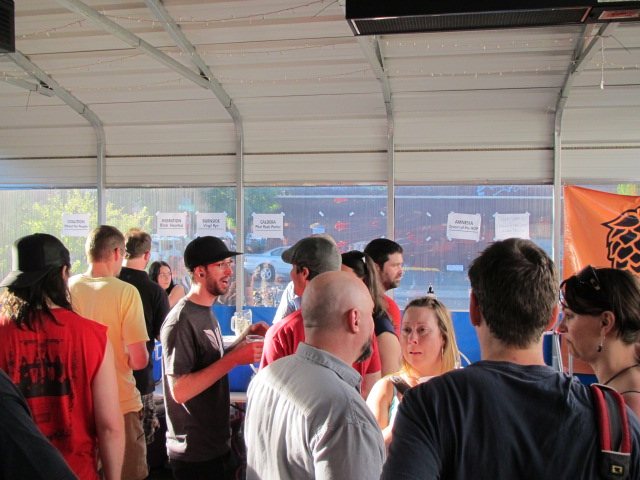 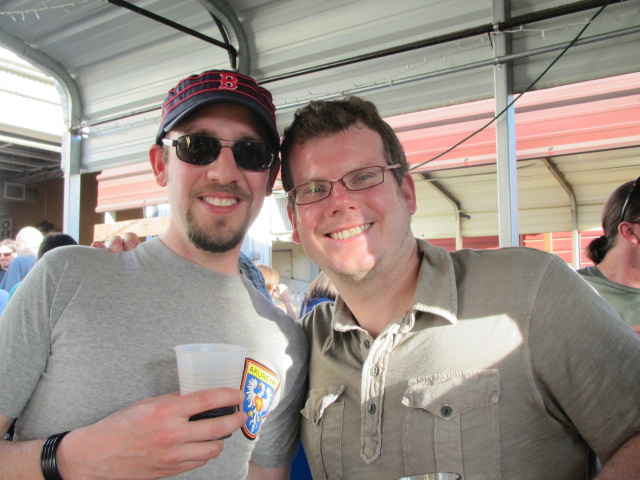 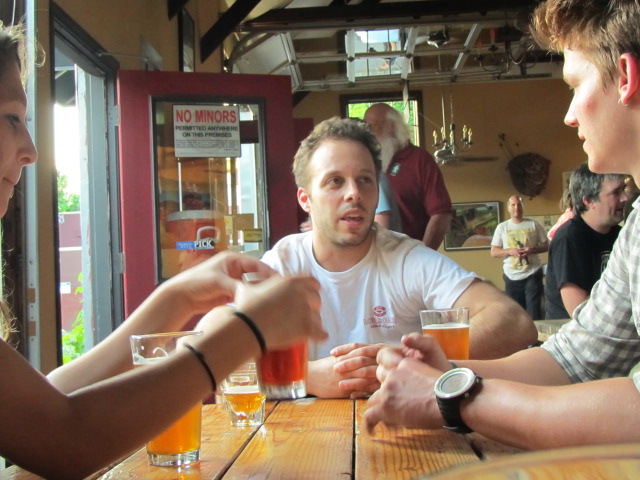 For the second week in a row, we made an appearance at By The Bottle in Vancouver, WA (twice in “Vantucky” in one weekend!). Here we held down the fort alongside beertender Wade Fauth. There was still some Chuckanut Kolsch on tap, which we champion as one of the greatest brews ever – really. By The Bottle also had growlers of Seattle’s Fremont Brewing Interurban IPA and M.T. Head’s Dark Marc Cascadian Dark Ale for sale in the bottle shop (they still do as of this posting so go get yourself some). 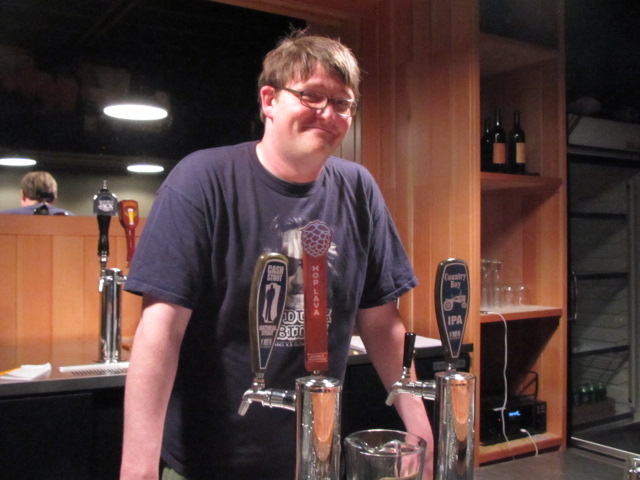 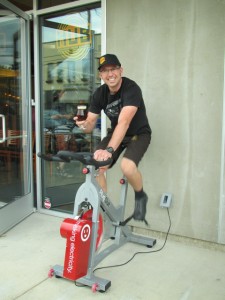 Back into Portland to wind down for the weekend, we had one final destination for which to arrive. Making their soft opening on this day was Hopworks Urban Brewery‘s Bike Bar, located on what is now known as “the Bike Highway,” next door to New Old Lompoc’s Fifth Quadrant/Sidebar. Here, a simple astounding build out married both clean artistic prowess with cutting edge sustainable and technological design. Brewmaster/founder Christian Ettinger greeted us at the door as did public relations specialist Bruce Kehe. both gave us a tour of the chic pub and its many energy saving and eco-conscientious features. It all culminated with a wonderful dinner consisting of a tofu po’ boy with salad and a snifter of HUB’s brand new and dangerously delicious Galactic Imperial Red Ale. Stay tuned for a future article detailing many of these facets. 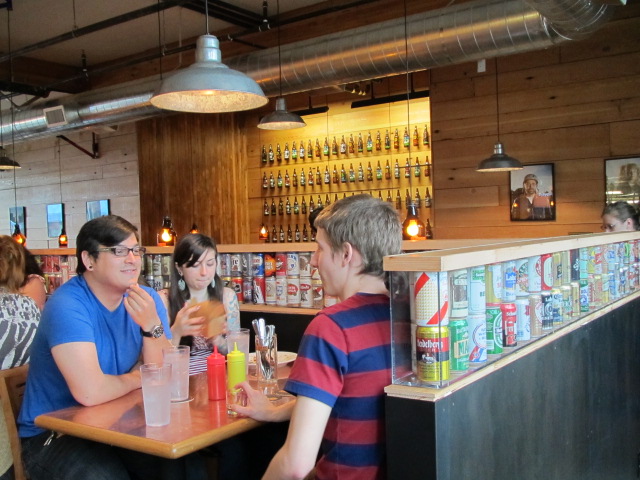 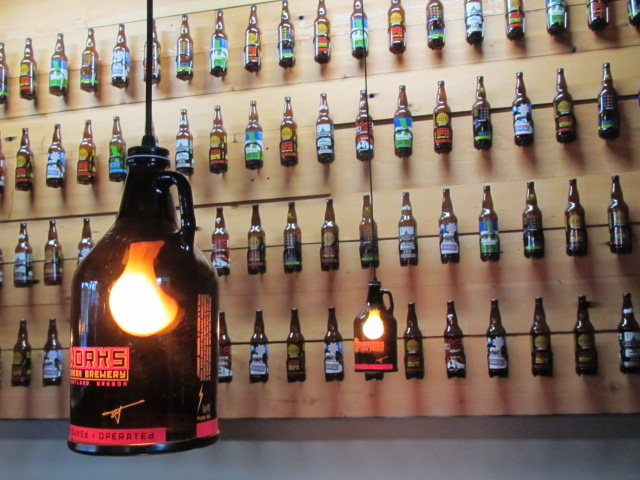 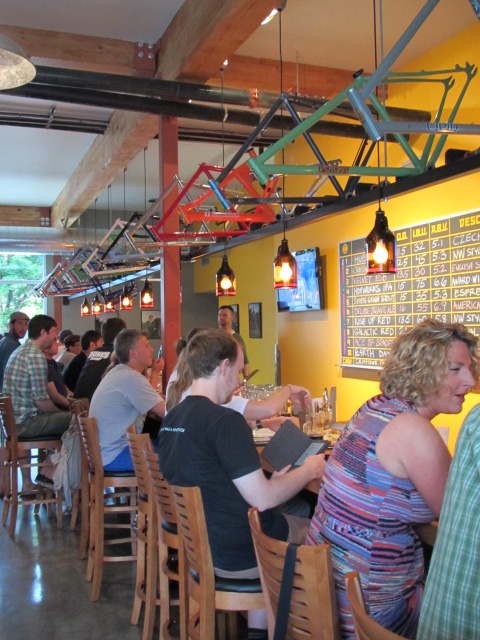 So, that’s a wrap for now. Thanks to all who shared their beer and time with us. Good beer and godspeed!