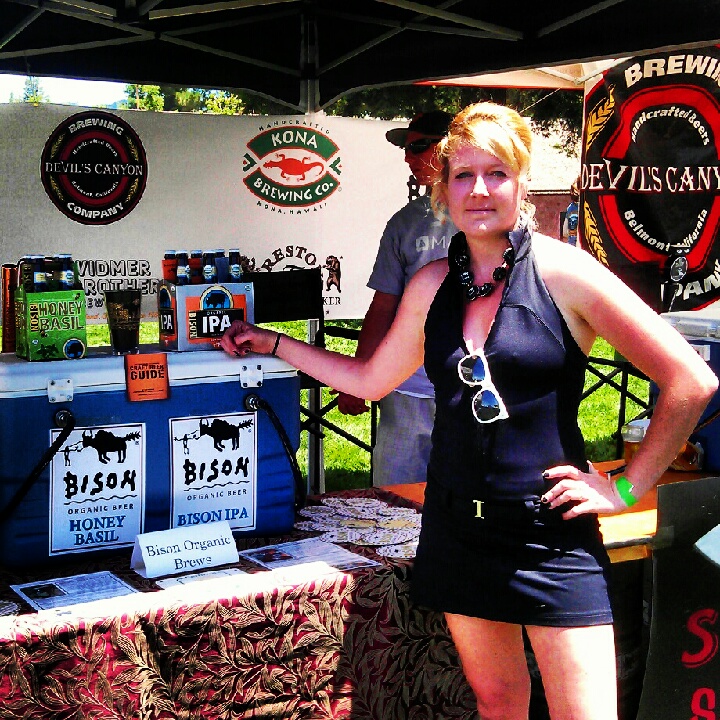 So I’ve landed in The Bay Area of California. Not by any means Beervana as I’ve come to know it, but certainly no slouch for great craft beer. Just a bit to the north of Berkeley where I am currently residing, there resides some of the best breweries on the planet such as Russian River, Lagunitas, and Bear Republic to name a few. Even down here closer to the Bay, there are some amazing treats to be found like the brews of Bison, Drake’s, Anchor, Speakeasy, Pyramid and newbies  Southern Pacific and Elevation 66. Oh, and I certainly can not fail to mention the quintessentially refreshing Trumer Pils brewed right around the corner from where I am now residing.

Upon arriving in the East Bay city of Berkeley, I was welcomed with a stop at Lanesplitter Pizza which has three pubs and two “pit

stops” throughout the area. You may remember that Hopworks Urban Brewery‘s initial pizza master Andy Litka helped open HUB’s pizza kitchen after running three Lanesplitter location in the East Bay. Lanesplitter is a wonderland of pizza pies and delicious craft brews. The first day since I had returned to California, my wife Ashley aka The Beer Wench took me out for lunch at Lanesplitter’s San Pablo Avenue location in Berkeley. Outfitted with a warm ambiance and a relaxed and spacious back patio, it was the perfect atmosphere for a sunny late spring day. The food and beer offerings weren’t too shabby either. Slices of New York and Sicilian pies were available to pair with  of a handful of tasty regional draught brews including a 3.8% Mild from Drake’s that quickly lured me in. However, I was persuaded to roll with the luncheon special of the day, Bear Republic Racer 5 IPA for just $2.00 a pint. Yowzers! This paired with a couple slices of their famous vegan herbivore thin crust pie and a fresh garden salad did me just right. Knowing this joint is across the street from my neighborhood laundromat means I’ll be passing some minutes here enjoying that which ‘Splitters has to offer me.

My first beer festival in California was a doozy. We headed an hour or so north of Berkeley in the town of Santa Rosa, for their 21st annual craft beer festival, simply referred to as “The Beerfest”, this outdoor celebration of predominantly regionally produced craft beer was held of the Wells Fargo Center on the outskirts of town. Kicking off at 1:00 p.m., more than 40 breweries were represented on the very warm and sunny day in which tents were erected to screen servers and attendees from the persistent rays that beamed down from a cloudless sky throughout the four-and-a-half hour fest. 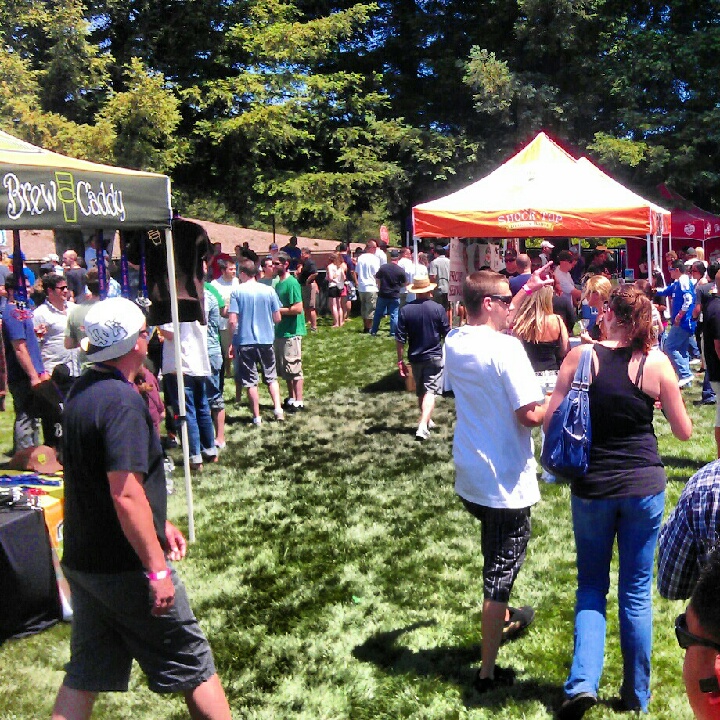 Live music throughout the festival by Santa Rosa’s own Rovetti and Meatballs provided a nice vibe to the day. The bluegrass, rock, and swing fusion group is an area favorite by lead singer and mandolin/violin/fiddle player Chris Rovetti and company. Rovetti and his lineup of skilled players belted out some catchy covers from the shade of a small cypress grove while some folks danced and grooved to their sounds and many more partook in tasty brews. 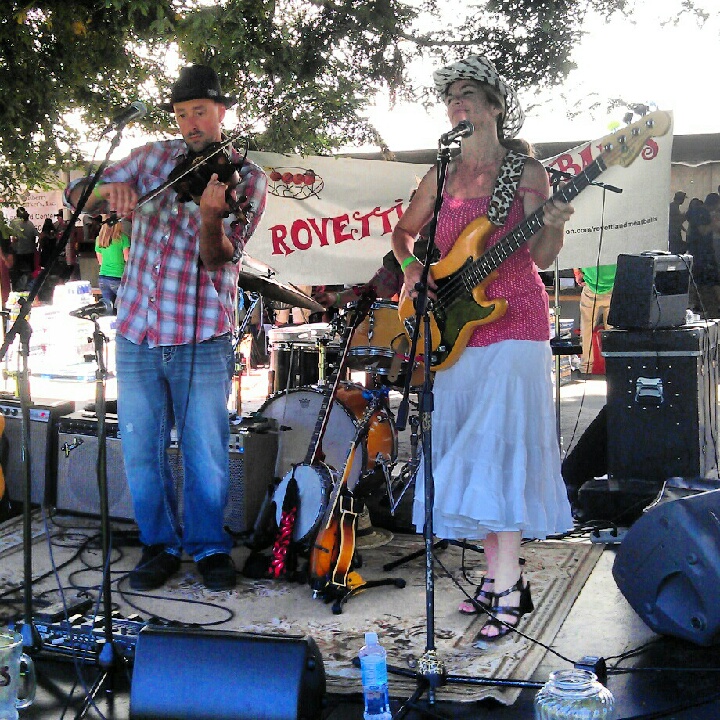 The beers of this festival included many flagship brews and several more sessionable lower ABV quaffers suited for this radiant day. Highlights included the following:

Marin Bluebeery Ale: If you know me, you know I am a sucker for blueberries. This could be in large part due to my New England roots, or the fact that this wonder beer from Marin Brewing in nearby Larkspur, CA offers a wonderful balance of crisp cereal grains and lusciously luring blueberry flavor. Included with the price of admission at the Beerfest was all the beer you could drink and, thanks to Andy’s Produce Market of Sebastopol, CA, all the fruit you could eat. I took this opportunity to hit up Andy’s stand for some juicy plump blueberries, and tossed them into my brew to add more blueberry delight. 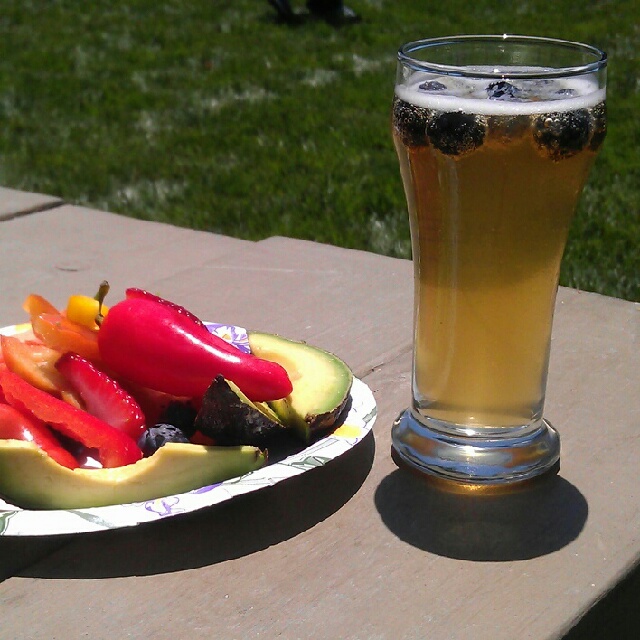 Russian River Little White Lie: Santa Rosa, CA is home of the world famous Russian River Brewing, so naturally, brewmaster Vinnie Cilurzo’s offerings would be featured on this day. The all you could drink Pliny the Elder and Supplication were quick to disappear, but a more sessionable Little White Lie Belgian-style witbier was, in my mind, the way to go on this nearly squelching afternoon. With an non-intimidating 5% ABV, this unfiltered wheaten ale sated my sessiony desires with a mild spicy tartness and a snap of coriander, orange peel, and cumin. And that’s the God’s honest truth! 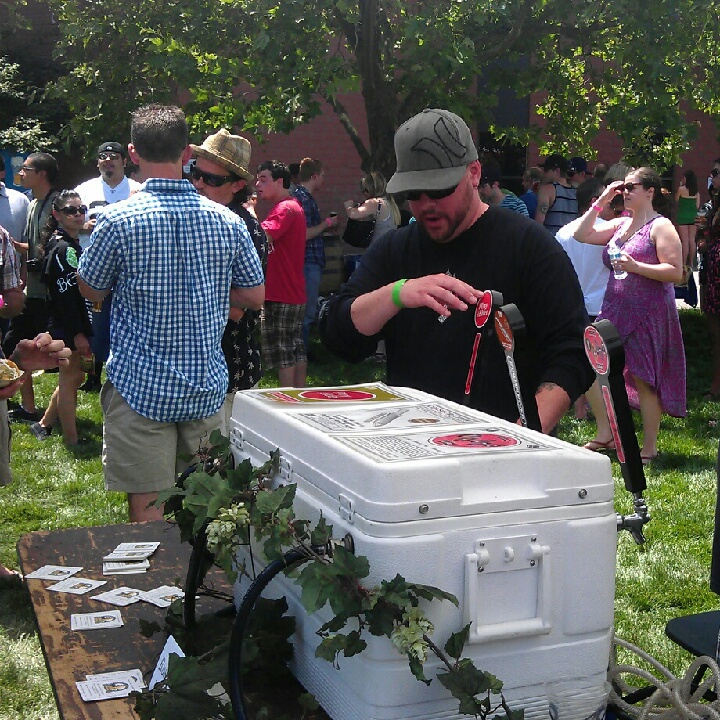 Trumer Pils: The perfect Pilsner? It’s hard to argue the Trumer Brauerei of Berkeley, CA doesn’t produce just that. readily available throughout the region, this affordable and lifesaving refreshing lager beer is an obvious choice for most beer enjoying circumstances. On this day, a few return trips for a glass of this German-style Pilsner was very much called for. 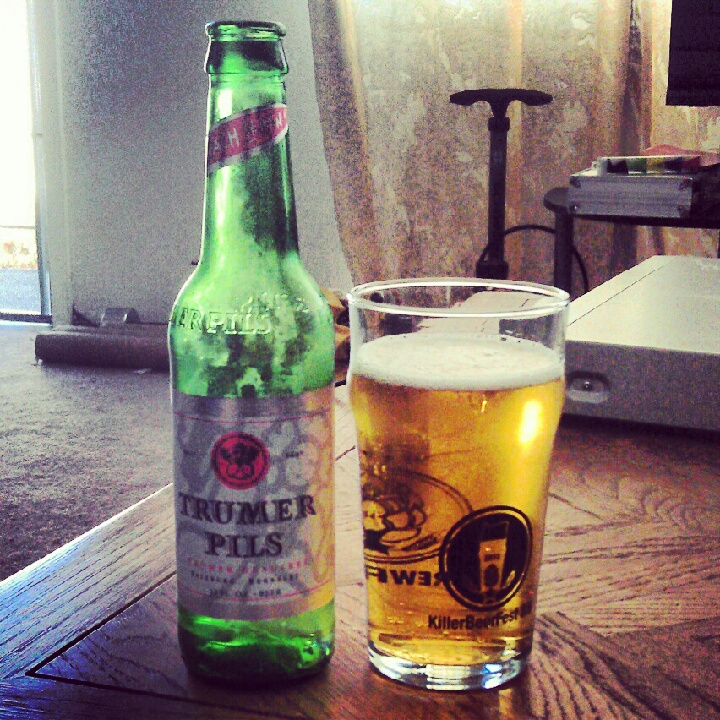 North Coast Scrimshaw: Yes, ’twas the day for refreshing Pilsners, and one of the best in show was Fort Bragg’s North Coast Brewing‘s Scrimshaw Pilsner made with Munich malt and, Hallertauer and Tettnang hops, and checking in at a light 4.4% ABV. It should also be noted that North Coast also featured their very drinkable Red Seal Ale on cask as well. 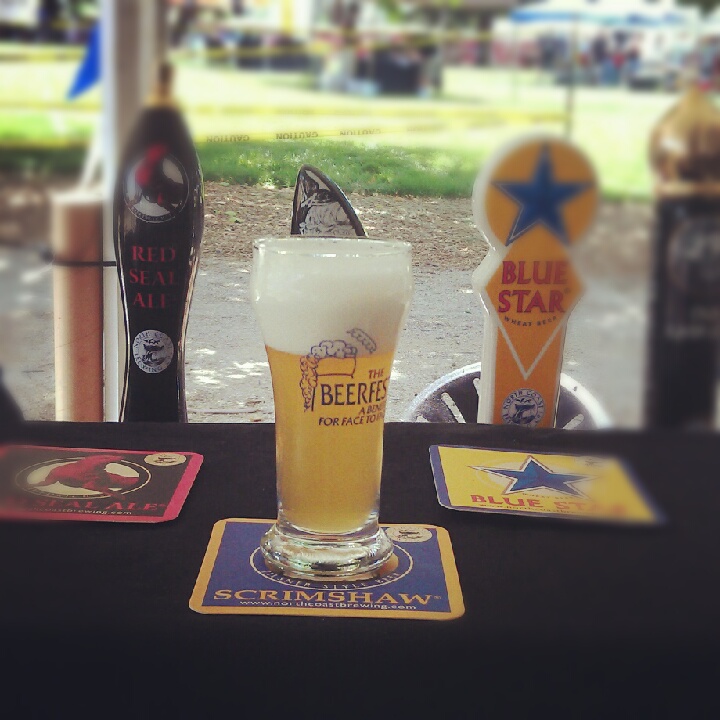 Bear Republic Double Aught: Not far from Santa Rosa is Bear Republic Brewing of Healdsburg, CA, which, as you may be aware, makes some of the nation’s finest ales, and yes, lagers. Suited perfectly for this afternoon’s festivities, BR’s Double Aught Bohemian Pilsner delivered that which many folks at the Beerfest were in search of. Light, grainy and crisp, this 4.2% ABV offering was illuminated with grassy Noble hops. 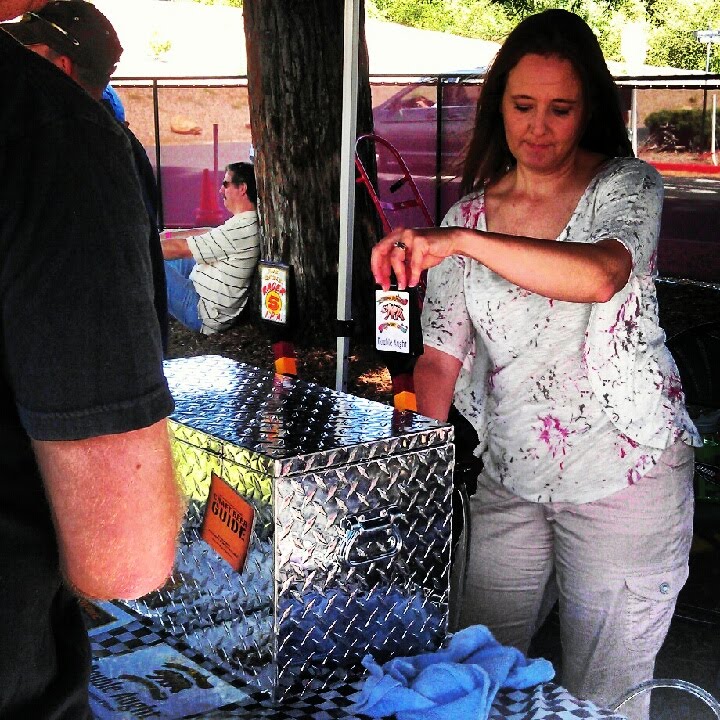 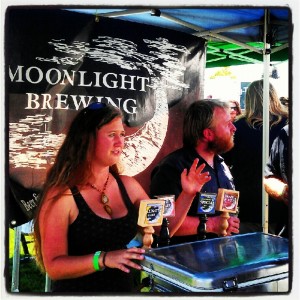 Moonlight Legal Tender: For those looking for a beer off the beaten path, Moonlight Brewing of Fulton, CA had just the thing. Their Legal Tender ale was a gruit of sorts, meaning it was an ale brewed without the addition of hops. Instead, this mysterious special brew utilized wild rosemary, yarrow, and redwood branches (oh, and as the woman serving it said “…and fairy wings”). 5.5% ABV and with a flavor that tastes like it sounds, it was certainly a highlight for those of us who like to explore new and innovative beer styles. Further, Moonlight also offered their Lunatic Lager and their Death & Taxes Schwartzbier. As long as I am  in the area, I get the feeling that a lot of Moonlight brews will be making safe passage down my gullet. 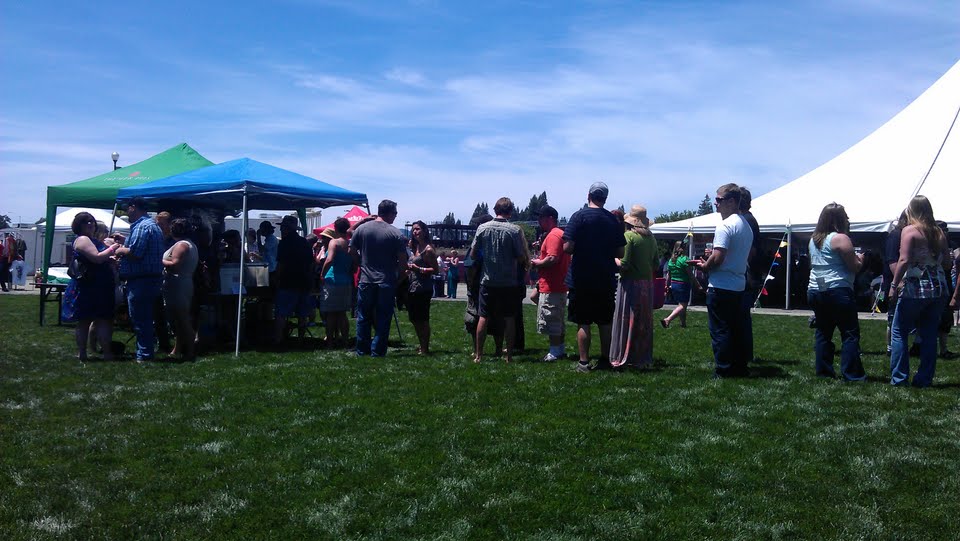 After the festival wrapped up and beers were hauled off, we gathered with our friends Shana, Jeff, Glenn and Tatiana who live in Santa Rosa to enjoy a few brews at Russian River Brewing. Their Noble Experiment Saison was an obvious choice for me as was a few sips of Jeff’s Pliny. We also found time to wet our whistles at Santa Rosa’s own Third Street Aleworks Restaurant & Brewery, which had a presence at the brewfest early and offers up some decent beers of their own. Hey, when in Santa Rosa… 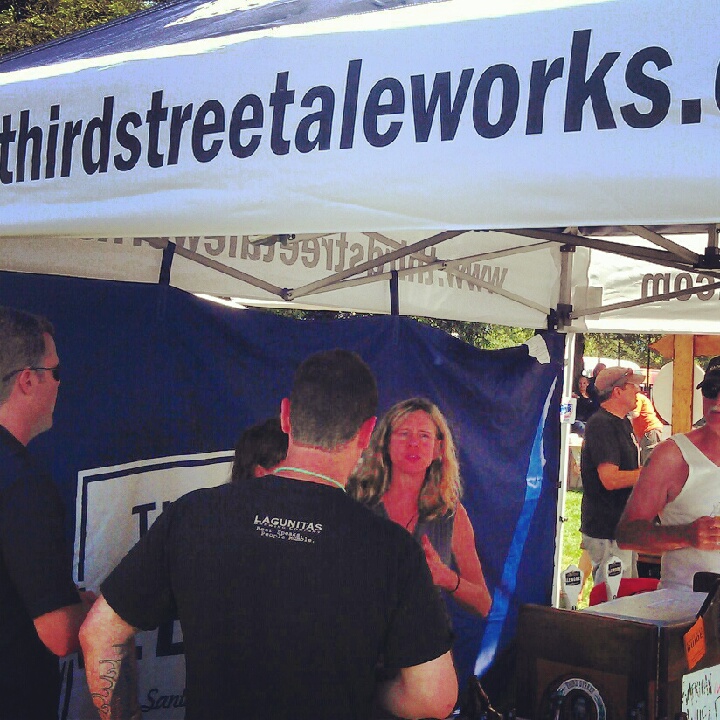 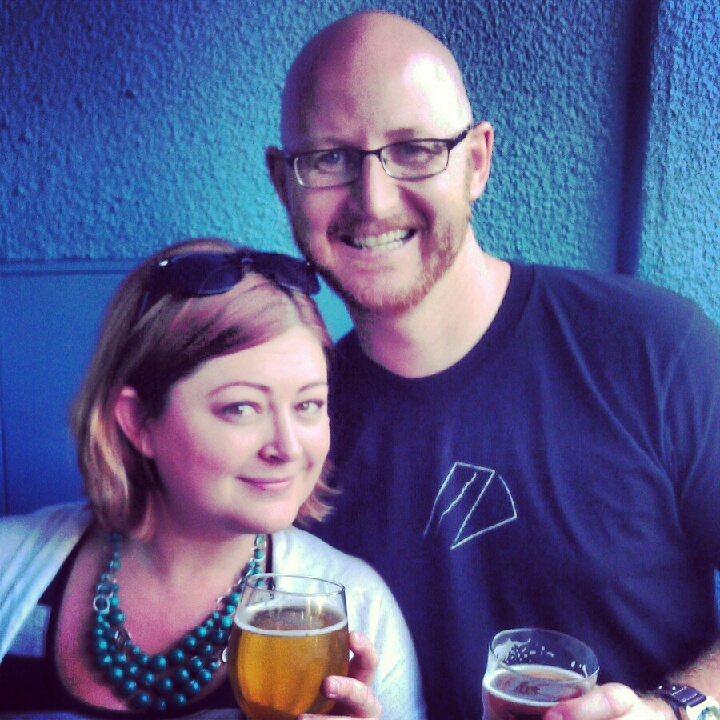 After crashing in SR for the night, Ashley and I headed back south toward Berkeley, but not before a quick stop at Lagunitas in Petaluma, CA. Here we enjoyed live music in the vast sunny outdoor patio of their Beer Sanctuary while she sipped on a distinctly rich and tart Gueuze and I a crisp Czech Pils as we snacked on their highly addictive salted pretzels and peanuts. Then, we headed home to unwind for the remainder of the weekend. Good times, great beer! Prost! 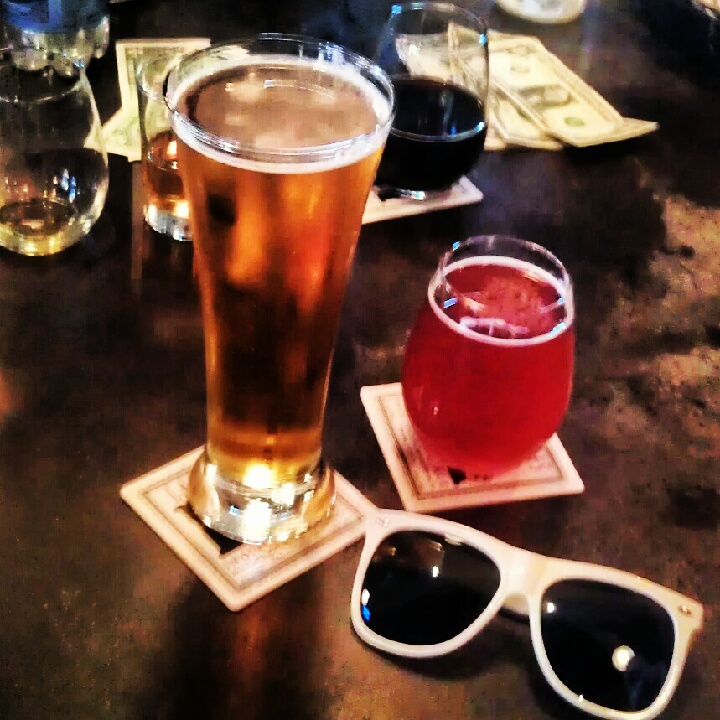 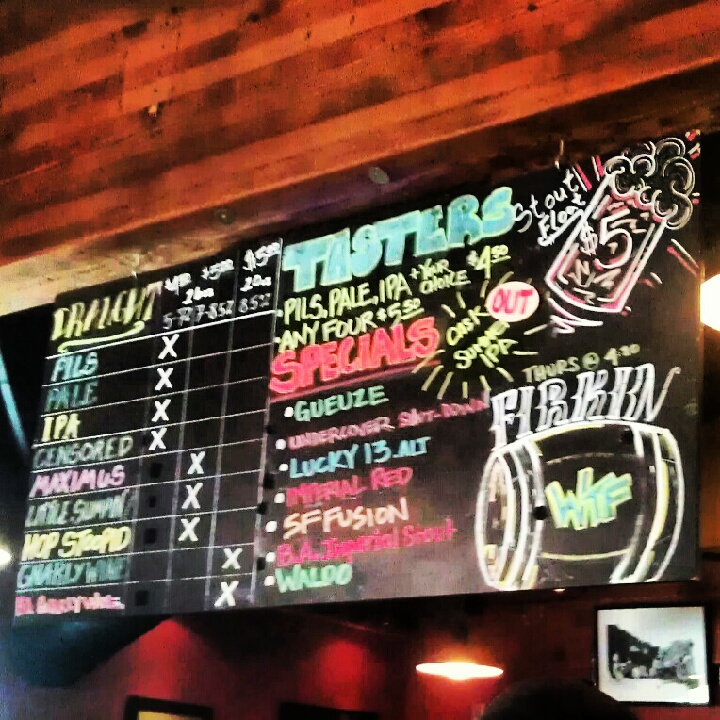