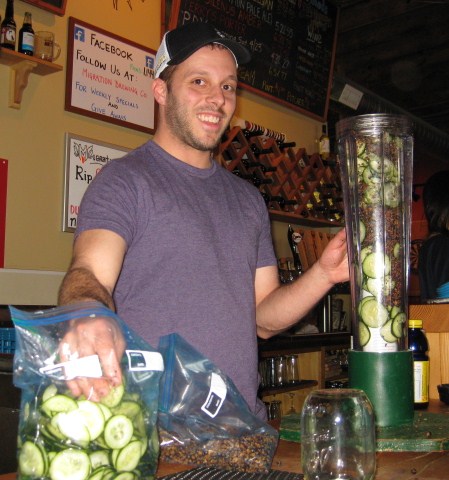 Breakside Brewery‘s head brewer Ben Edmunds dreams up and executes some of the most inventive craft beer recipes known to humankind. If there is a style of beer that Ben hasn’t made that would almost be as shocking as some of his limited releases. Whether it be a Beet Saison, Mango IPA, Kombucha Barleywine, Gruit with chili peppers, what have you…Ben never ceases to amaze his friends and patrons at the NE Dekum brewpub.

It is soon to be July, and you know what that means – a month of Oregon’s most prolific craft beer celebrating – Ben and his assistant brewer Sam Barber are taking their joyful imagination to new heights with a series of themed tastings and playful releases to satiate the Randy Mosher in all of us.

Here’s the details in a press release we just received from the mad professor over at Breakside:

With the start of Oregon Craft Beer Month only days away, the brewing and front-of-house teams at Breakside Brewery (820 NE Dekum) have been busy planning events and brewing specialty beers to help celebrate this great celebration of all things beer.

At the pub itself, two fun celebrations will punctuate the month. First, on July 6, visit the brewery for a horizontal tasting during its Night of the Alsatian Blonde Ales. Brewer Ben Edmunds created a French blonde ale using a saison yeast; the batch was then split three ways and aged on three different types of white wine grapes common to the Alsace region of northeastern France. This night, Breakside will serve taster trays of the individual strains—riesling, gewürztraminer, and muscat—as well as the Cremant Gentil, which is a blend of all three.

Then, on July 16, join Breakside for a night at the beach—the official Beach Saison Release Party. This party will celebrate one of the brewery’s exciting new seasonal beers. Edmunds worked with Cascade Brewing’s Sean White to create a Dupont-style saison for the summer season. Since everyone’s trying to look their ‘beach season’ best, the pub will offer drink and food specials to anyone who comes dressed in beach attire. The night will also include a special release of a second version of the Beach Saison aged on Oregon cherries.

Meanwhile, other special releases, including some barrel-aged beers, will be available throughout the month. Edmunds and new assistant brewer Sam Barber have prepared a series of experimental beers, still released each Wednesday. Upcoming brews include a Curacao Gruit (June 29), Heffenhoofer Hopfenweisse (July 13), Belgo-Scottish Ale (July 20), and Gin-Barrel Double Wit (July 27).

The small-batch experimental brews will complement other rotating seasonals. Currently on tap are Strong Saison, Summer Gruit, and Just the Tip Spruced Wheat. Coming soon, expect to see a sessionable Scottish 70 Shilling, low alcohol wheat Grisette, and a pale ale brewed with Ahtanum hops. And don’t forget, Mango Mondays—where a single keg of the sought after Mango IPA is released each week—will continue throughout the summer.

In addition Breakside beers will be on tap at many smaller festivals and events during Craft Beer Month. The Summer Gruit will be served as part of the Kick-Off Dinner this Friday, July 1. Look for the Saison de Roxanna—a brew made in collaboration with the Saraveza staff—to be on tap during that bar’s Double IPA fest in mid-July; and Breakside’s Barrel-Aged Gose will be part of the lineup for this year’s Puckerfest at Belmont Station. Finally, look for a debut tapping of the brewery’s Peach Hefeweizen at BenFest on July 25.