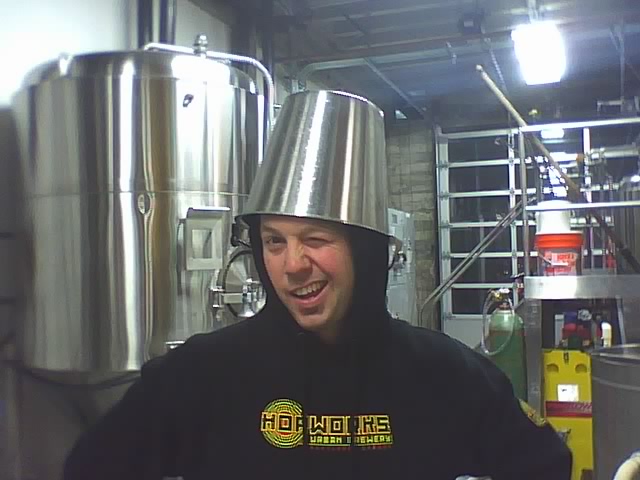 My biggest complaint about the weekends is that they don’t last long enough.  Even in February, the shortest, and seemingly drabbest of months, there are countless brews and events to fill your days with.  Looking ahead to March, there is the immediacy of the gigantor quaffathon known as Lucky Lab’s Barleywine and Big Beer Festival.  This past weekend, in the final throes of the month, the sun made a few cameos and the weather was ripe for pulling weeds in preparing the garden for a promising and hopefully warm summer.

Before subjecting ourselves to the megabrews of BW & BB, we decided to play it safe with an assortment of (mostly) middle-of-the-road hoppy and moderate beers. Here’s where our adventures took us:

Friday found us at the Gladstone Pub (aka The Stone) on SE 37th and Gladstone in Portland.  Here’s a venue I’d been itching to investigate since the statewide smoking ban was put into effect.  I hadn’t been there for a few months, but remembered the decent selection of micros intertwined with standard poo beers.  Usually at the Stone, there’s a stand out beer like something from Golden Valley or some other seasonal.  On this occasion we discovered such a beer was the Roots Festivus winter ale, a rich, deep amber-bodied beauty with a fluffy off-white and a nose that lured in the inner-hophead to a world of malty complexity.  I was en Roots to a promising evening.  As for the Stone, the space, which appears to be a converted old barbershop with checker tiled floors and nice ambiance, was hindered by one key element:  a musky odor indicative of years of smoking and poor ventilation.  Nearly three months since the statewide band and the plume of indoor chalky second-hand smoke was now replaced with plumes of outdoor second-hand smoke that made its way upon most patrons heading out front to light up on a regular basis.  The Stone may have been forced to shut down the smoking, but the customers remained loyal to their habits.  It brought to mind something I heard from a friend about another establishment that recently became a “victim” to the new health code.  He pointed out “Instead of smelling like second-hand smoke, it now smells like vomit.”  Well, I am not certain the specific smell of up-chuck, but I am pleased at how well places like the Horse Brass have cleaned up.

Leaving the Stone for greener pastures, we found ourselves soon after at Hopworks.  Maybe a critical error on a Friday night, as the place is often elbow-to-elbow at this witching hour, but it was all good once we found some breathing room upstairs at the Ms. Pac-Man table where I managed to pull 60,000 or so points out of my carpal tunneled hand. At HUB we ran into some of the most talented and amiable brewers around, Ben Love and Jaime Rodriguez.  We were pleased to find the Oregon 150 super hopped IPA pouring as well as the Sasquatch collaborator beer.  The 150, at $6 for 16.5 oz, was pricey but massively, florally hopped with bright, enticing fruited notes.  Even at this hefty price, I shelled out twice for this wonderful beer.  In addition, I enjoyed a pint of the deliciously quenching lager, one of my favorites.

Saturday we headed to John’s Market Place to recycle some empty bottles and cans and restock the beer fridges with more delicious treats.  Being careful to select a properly aged brew, I was happy to find an assortment of brews including a variety of IPAs. Silver Moon Brewing of Bend has been impressing my palate of late, so I was delighted to find the Hop Knob IPA as well as the Panty Dropper Ale, which they contract brew for a SW Portland outfit of the same name. The Hop Knob was a piquantly hopped pale with a dark copper body and a warm, crisp bitter finish.  At 5.7% ABV, and brewed with whole cone hops, it was just what the doctor ordered.  The Panty Dropper, at lesser ABV (5.2%), possessed a more assertive flowery presence.  Big, spicy and with a creamy, biscuity follow-through, it was a welcomed counterpart to the Knob. 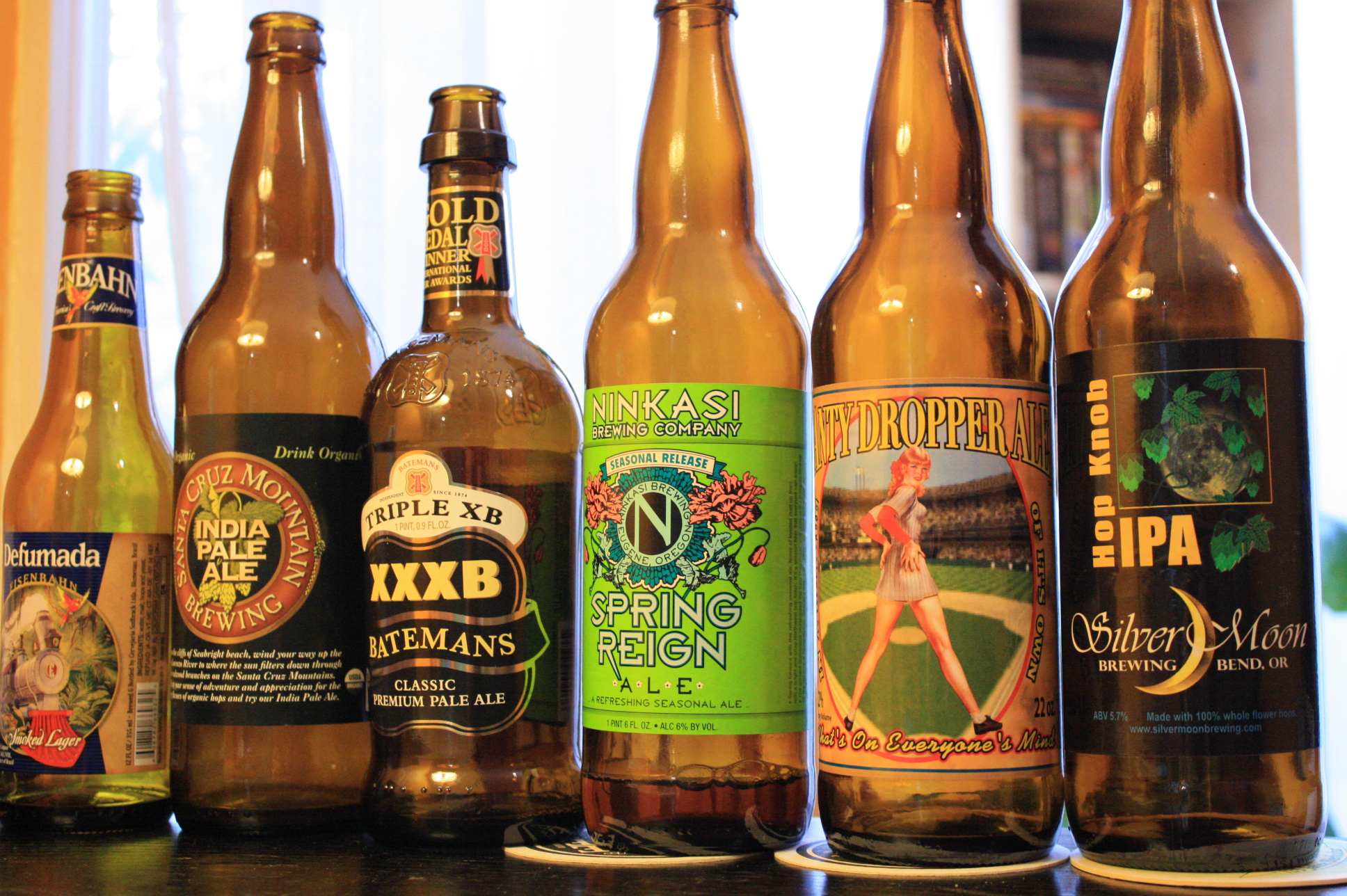 My friend Jay picked up a bottle of Santa Cruz Mountain Brewing’s India Pale Ale.  It was a while since I’d had this one, but remember enjoying this certified organic brew at past NAOBFs. This IPA was a lesson in infection.  Had it been billed as a buggy brew replete with Lacto, Brett and Pedio, it would have been a rave. However, it was supposed to be a NW-style IPA.  Still, I found retreat in a couple sips of this weird science experiment before showing it to my kitchen sink drain pipe.  Following this, a pour of Eisenbahn’s Defumada Smoked Lager.  From the German-speaking town of Blumenau in Brazil, Eisenbahn (meaning “railway” in German) makes an assortment of well-built beers.  This particular brew is a 6.5% ABV malt-driven brew with a great kick of smoky peat.  Here is a beer I couldn’t drink night and day, but is definitely worthy of revisiting from time to time, and a nice contrast to a series of hoppy ales. 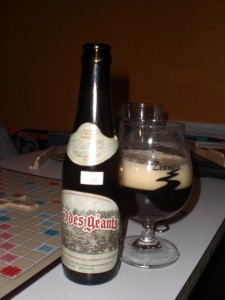 From Whole Foods Marketplace in the Pearl District (Downtown PDX), I was happy to find freshly stocked 22-ounce bottles of Ninkasi’s Spring Reign.  A refreshing seasonal spring pale ale I had already enjoyed at its unveiling at KLCC in Eugene.  Finally available in bottles, the beer steward at the store informed me that they were the first store in town to sell the beer.  I guess my timing was lucky, and after a few sips, I realized my palate was as well.  A wonderfully biscuity pale ale, Spring Reign pleased with waves of grapefruity Simcoes.  Yum.

During the weekend, it is important to visit Bailey’s Taproom for a quick pint or two.  Geoff Phillips and Michael O’Connor always flex their beer muscles to present one of the best beer menus in the Pacific Northwest. As I arrived, I was zombified yet again by the vast selection of draughts.  However, I was quickly hypnotized by the tapping of Russian River’s Pliny the Younger.  I guess my timing on this day was impeccable beer-wise.  How could I pass up this one?  And to follow up with PTY, I was treated by the emergence of an imperial pint of Victory’s Hop Wallop.  One thing I love about Bailey’s Taproom outside of the mind-blowing selection, is the absence of price gouging.  In an age where many brewpubs and taprooms go for the jugular on prices, Bailey’s offers affordable honest pints.  The Wallop was just $5.50 and that was just dandy. In fact, a lot of the imperial pints at Bailey’s sell for cheaper than the pints at brewpubs where they are made. Kudos to Bailey’s for being one of Portland’s finest.

Following Bailey’s we headed home to play some scrabble over a glass of Batemans XXXB Classic Premium Pale. This brewery is featured on an old Beer Hunter video and dear to the late Michael Jackson, so I figured I’d give it a whirl.  Very Englishy was this 5.0% International Gold Medal winner.  I didn’t feel blown away by the caramel and cream malt spine, but definitely appreciated the take on the traditional British style.

So that’s it in a nutshell.  Another fun filled weekend.  But with that comes the beginning of another work week.  Enjoy yours.  I will leave you with some lyrics by the band Blur: