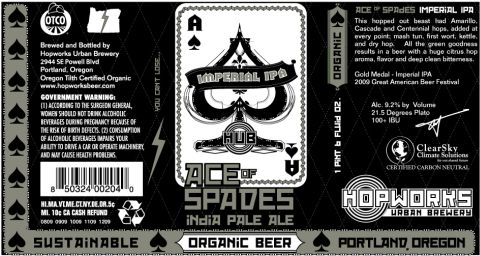 Hopworks Urban Brewery’s (HUB) award-winning Organic Ace of Spades Imperial IPA is now available in 22 ounce bottles at select Portland-area stores. The limited release beer won a gold medal at the 2009 Great American Beer Fest in the Imperial IPA category and is a favorite with guests at the company’s brew pub.

Named in honor of rock n’ roll icon Lemmy Kilmister and his band Motörhead’s popular song and album, Ace of Spades prominently features Amarillo, Cascade and Centennial hops, added at every point of the brewing process: mash tun, first wort, kettle, and dry hop. All of the hoppy green goodness results in a beer with a huge citrus hop aroma, flavor and deep, clean bitterness.

“Ace of Spades is similar to Motörhead’s music; powerful, direct, well-made and rockin,” said Christian Ettinger, owner and brewmaster of Hopworks. “It’s safe to say Lemmy would proudly tip a pint or two.”

Belmont Station in Southeast Portland is hosting a release party for the beer between 6 and 8 p.m. on Tuesday, April 13. Brewers from Hopworks will be on-hand, cranking up the Motörhead and talking about their beer. Belmont Station is located at 4500 SE Stark St. in Portland, Oregon.