Beer releases
White Salmon, WA: Everybody’s Brewing has announced the release of a new series of rotating sour beers in 12 oz cans, to be kicked off with the release
Read More 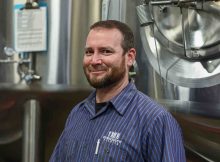