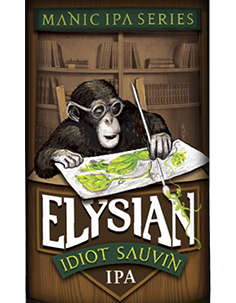 If the Mayans were right and 2012 is last year for us on this earth, the folks at Elysian Brewing Co. in Seattle are making sure we go out with a bang. The recently expanded brewery not only has announced the 12 Beers of the Apocalypse, a release series that will put forth a new and interesting specialty beer style each month, they’ve extended their efforts to include their “Maniac IPA Series.” Beginning in February 2012, Elysian will begin this series with their pub success, Idiot Sauvin IPA, a dank and floral ale brewed with copious quantities of the New Zealand hop varietal, Nelson Sauvin. Two other pub favorites, the Prometheus and Valhalla will also make appearances later in the year. Here’s more information sent out from Elysian founder Dick Cantwell:

We Are Hopping into 2012 with an Exciting New Line-Up of IPAS!

So many IPAs, so little time…

Elysian Brewing Company is planning to make brewing life a little more challenging by kicking off its IPA Specialty Series in February of 2012 with Idiot Sauvin, an IPA both fiercely fruity and floral, made with New Zealand Nelson Sauvin hops. The beer has appeared before only at Elysian’s pubs, and will be issued in both 22 oz bottles and draft.

Rounding out the year will be Valhalla, a reddish fall-into-holiday IPA using Sorachi Ace and Citra hops, scheduled for release in October. Too many IPAs? Bah, humbug!

About Elysian:
Elysian Brewing Company operates three neighborhood brewpubs and a production brewery in Seattle, WA. Known for variety, Elysian has brewed more than 200 different beers since opening its doors in 1996.