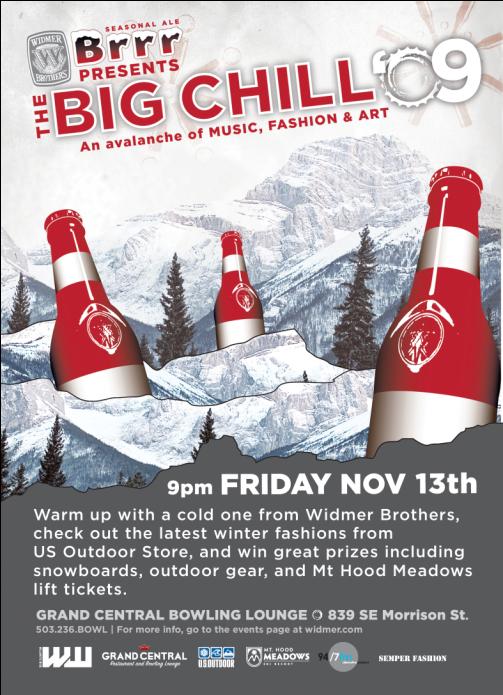 Seems every year the winter brews come out earlier and earlier. Delicious Northwest favorites like Ebenezer, Wassail, Sleigh’r, Sled Jerker, Jubelale, Misteltoe Bliss, Anchor Our Special Ale, Pyramid Snowcap, and so many more. Widmer is celebrating their winter warmer dubber “Brrr” with a chill party at Grand Central Bowl this Friday where you can try the new hoppy holiday brew while watching cool, pricy snowgear get modeled on the runway/bowling lane. Thi event called “Big Chill” will also feature a live DJ and music from local radio station 94.7-FM KNRK.

Put on your bowling shoes and stocking caps for the 2009 “Big Chill” at Grand Central Restaurant and Bowling Lounge, taking place this Friday, November 13th. This second-annual event, a celebration for the upcoming snow season, will kick off at 9 pm and keep patrons toasty all night long with cold Brrr, the winter seasonal ale from Widmer Brothers Brewing.A winner of a snowboard design contest will win a gift subscription to the U.S. Outdoor Store downtown next to Bailey’s Taproom.

The night will include music from 94/7 FM and Grand Central’s new DJ, Clint Kuper, as well as a fashion show on the bowling lanes with the best in winter gear from U.S. Outdoor Store, including looks from Airblaster, Bond, Bonfire, Burton, DC, Holden, Oakley, Volcom, 686, and more.

The event will also feature custom snowboard design entries from the 94/7 Snowboard Design Competition and one lucky designer will leave with a customized Revolution snowboard, a 2009/2010 Season Pass to Mt. Hood Meadows, and a $50 gift certificate to U.S. Outdoor Store.

Snow-junkies can also get their pictures taken at the Big Chill photo booth or warm up with a sample of cold Brrr, after it makes its way down the Brrr ice luge.

The evening will be filled with plenty of Widmer Brothers Brrr and tons of prizes! Admission to the Big Chill is free. A 2009 commemorative mug is also free when purchasing a Brrr Seasonal Ale for $3.50, while supplies last.