Every once in a while Deschutes Brewery lets its pub brewers in on developing beers that see the light of day in its Pub Reserve Series. The next two bottle releases in the Pub Reserve Series is set to take place on Friday, September 25th, when Black Butte³ and Sour Quad are released in wax dipped 22 ounce bottles. These two bottles will only be available in Deschutes Brewery’s Pubs in both Bend and Portland along with its Bend Brewery Tasting Room.

Black Butte³ is described as a delicious equation of Deschutes Imperial Black Butte Porter aged in Black Butte Porter Whiskey casks from Bendistillery. The result is a tantalizing libation of bourbon, chocolate, vanilla, caramel, oak that is set upon a slightly smoky, roasted finish. Black Butte³ is 90% oak aged so be prepared for an aggressive beer that should age gracefully. Black Butte3 will be for sale at $25 for a waxed dipped 22-ounce bottle. 12.6% ABV 53 IBU

Sour Quad is a sour strong ale aged in Pinot and Sherry casks. This sour ale features a nose of Brett with a mix of complex yeast driven fruit aromas of apricot, blueberry, cherry, and peach. Its big malty sweetness and fruit notes balance the wood character and tartness from the barrel aging process. 12% ABV 52 IBU 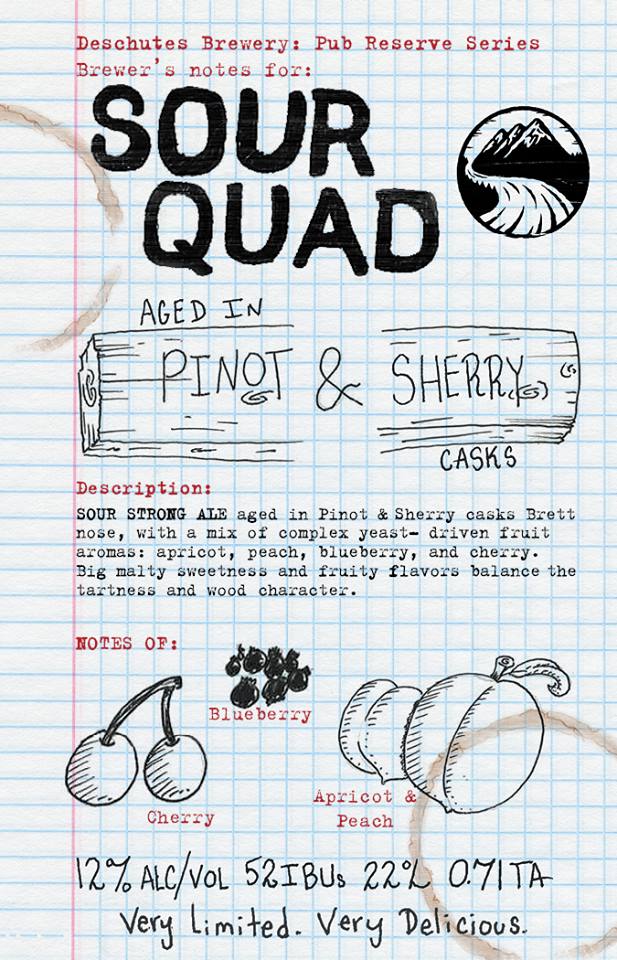 In Portland the Black Butte³ and Sour Quad bottle release will take place at the Deschutes Brewery Portland Public House on Friday, September 25, from 3:00 to 6:00pm. This will be the only location in Portland where one can pick up either of these two bottles. Once they are gone there will be no more!

The release in Bend at the Deschutes Brewery & Public House will take place all day on Friday, September 25, from 11:00am to 11:59pm. To compliment both releases, Chef Brian will be preparing a few culinary specials that are sure to pair well with both the Black Butte³ and Sour Quad.