It had been four days since we’d left Gold Beach and already we had already visited fourteen California breweries.  We packed up our belongings at Erik’s place in the Presidio after a beer filled night on the town in San Francisco and headed back to the lower mission for one last San Francisco hurrah.  Our first stop was the City Beer Store on Folsom Street. The place was a little cubby hole filled wall to wall with craft and imported beers.  I am guessing there must have been about 300 in all.  They also featured an assortment of beers on their six taps.  Many of the bottled beers were not in coolers and randomly hanging out on a tall shelf in the back of the shop.  This is where I discovered some hard to find bottles for Oregonians like Drakes Imperial Stout, Port Imperial Pilsner, as well as a can of 8.5% Belgian-style fruit beer from Santa Cruz..  I also noticed that they had the 2008 Deschutes Abyss available, but decided to try my luck with it upon returning to the Rose City.  I purchased three different 750ML bottles of beers from the Bruery, only to discover they had become available for distribution in Oregon while I was on the road.  Still, some excellent beers including the Black Orchid, the White Orchid and the Autumn Maple brew were worth discovering.  Being from Oregon and working at a beer store in Washington, I wasn’t blown away by the selection, but being a beer lover, I can appreciate what this place is attempting to do for the people of San Francisco.  Outside of BevMo and larger supermarkets, SF doesn’t really have a place like Belmont Station, the Bier Stein, or By the Bottle.  City Beer Store is an oasis of sorts.

After purchasing a mixed case of beer, and already going over budget on my trip, I reorganized the cramped trunk space in our car and the three of us headed down to 2nd Street to 21st Amendment Brewery and Restaurant for our first meal of the day.  It was a no-brainer for me.  I ordered the Holiday Spiced Ale, a wonderfully dark chestnut-brown robust beer filled with nutmeg, coriander, and cinnamon spices.  It was essentially Christmas in a bottle.  The menu board indicated that the place had 22 ounce bottles of this to go and I was surely going to grab one for the road along with some cans of their Hell or High Watermelon Wheat and the sharply hopped 21-A IPA. Margaret ordered the Autumn Wheat, a lightly hopped American style wheaten ale with a hazy golden body and a fruity essence that went well with food.  Erik opted for a Fat Bavarian, a German style hefeweizen served in a tall fluted glass.  It had a wonderfully bold phenolic nose of bananas and spiced with a spritzy carbonic mouthfeel.  All were very nice beers. 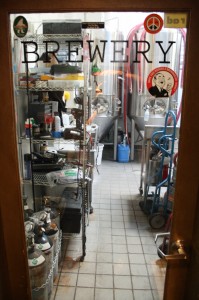 We kept a close eye on our parking meter, since the ticket for a violation of the time limit will land one a $60 fine.  On top of that, a quarter only got us five minutes, so we were watching that avidly.  After our meal we were excited about a peak into the brewery.  This was often the most fun part of visiting various places.  However, we were disappointed to find the door to the brewery locked and no one with the key to open it.  To make matters worse, we were told by our server that 21st Amendment didn’t bottle any beers, just cans of the two aforementioned perennial brews.  I mentioned the sign on the wall, and our server said it was not true.  Margaret insisted and directed him to the sign where it clearly said “22 ounce bottles of Holiday Spiced Ale to go.” Upon being shown his sign, our server said “Well I guess you win.” turned away from us and left us answerless.  Oh, well, it was still better than the mean lady at Anderson Valley.  We got a six pack of Watermelon Wheat and IPA in cans and headed on our way out or San Francisco. Next time we hope to arrange tours of the production only Anchor Brewing and Speakeasy Brewing, two of our favorites.  But we felt pretty content in the fifteen we had managed to visit thus far in California, and looked forward to a few more on our journey north through wine country. 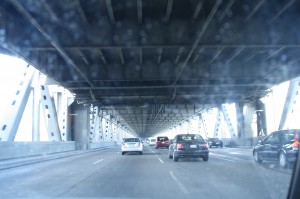 Our next stop: Rubicon Brewing in Sacramento.