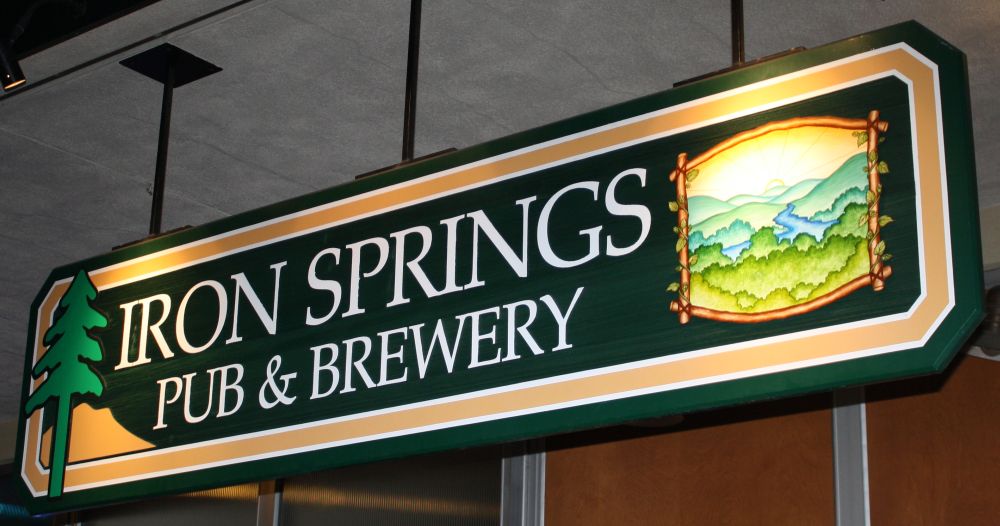 After driving in heavy rush hour traffic in the dark with no GPS, we somehow finally came upon Iron Springs Pub and Brewery in Fairfax, California just west of Anselmo about 20 miles from Novato.  We arrived to a bustling Friday night crowd packed to the gills in a small to medium sized brewpub.  Founded by New York native Mike Altman and his wife Anne.  Altman moved to the Bay Area via Colorado and Oregon.  In Portland, Oregon he worked at McMenamins scrubbing kegs and later in Boulder, Colorado, he tested his brewing skills at Mountain Sun Brewery.  In Long Island he spent twelve years as a professional French chef. 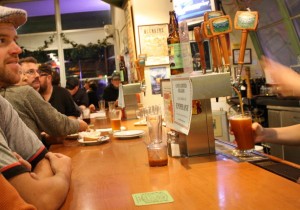 At Iron Springs, Altman and company make every effort to recycle every biproduct of the brewpub and is a Green Certified Business by the Marin County Community Development Agency For more on Iron Springs’ green practices, visit http://www.sustainablefairfax.org 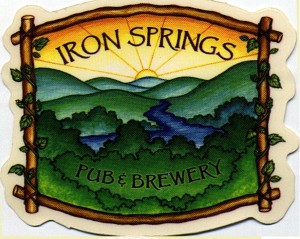 Iron Springs’ award winning beers was a key factor in our decision to visit the brewpub.  Their Sless’ Stoutgold medal at the 2008 World Beer Cup and their Ephiphany Ale, a hoppy Northwest amber won a bronze at the 2006 GABF. won a

Here’s a look at the beers we tried at Iron Springs:

Chazz Cat Rye: 5.5% ABV with a similar body as the kolsch.  Very light and thin and uber-sessionable. 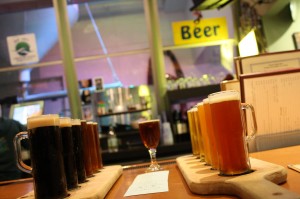 Epiphany Ale: Winner of the 2006 GABF bronze medal, this hoppy amber ale at 5.9% ABV was a heavily hop driven brew.  These guys must have a heck of a hop contract.  Unfortunately the hops in the epiphany were too cutting for me at this particular time.

Anne Marie’s Amber: 5.9% ABV with a hazy amber-copper body and a soft beige head.  Nose and flavor caramel creamy.  So far the most balanced brew in the lot.

Boot Jack Brown Ale: 6.3% ABV, nutty nose with a copper-brown body and a small white head.  A big carbonic mouthfeel was the leading characteristic in this brew.  Easy to drink and relatively well-balanced.  So far, I didn’t find any of the beers at Iron Springs to be exceptional or terrible.  Just derrivative of so many others I’ve tasted before.

Iron Age Four Year Anniversary Grand Cru: Okay, here’s a seemingly stimulating beer.  7.4% ABV dark, dry-hopped amber colored brew with a bright citrus Simcoe high-alpha nose.  Deep chestnut waves of flavor with a minimal head.  Floral fruity, highly hopped like many of the others.  Very interesting, but basically drowned in hops like many of the others.

Fairfax Coffee Porter: 6% ABV infused with Marin Roasters coffee, this English style porter had a viscous engine oil body and a mild coffee presence.  More like a stout. Finished on the tongue with an acidic slick presence.  Still, not too shabby.

Sless’ Stimulating Stout: 7.6% ABV.  Here’s the WBC gold medal winner.  This is a stout?  More like a porter.  Dark brown-black bodied with a wispy off-white head.  Huge coffee nutty nose with hints of toffee and lots of foreground cereal graininess.. 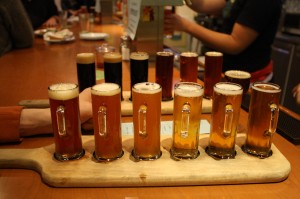 Note: The Fairfax Porter and Stimulating Stout must have been switched on the sample tray.  It is the only explanation.

Barstow Lundy Barleywine ’07: This 10% ABV deep burgundy-chestnut beer with a spotty off-white head was aged a year making me think it must have been hard around the edges when it first came out.  Sweet candy, caramel, burnt sugar nose with fruity, musty brown sugar, sticky residuals.  A beast to say the least.  Not to shabby.

So this concluded our tasting.  The place was a zoo.  The website mentioned the Ephinany and the Stout available to go in 22-ouncers, but only the Epiphany was for sale when we asked.  The wait was so long, as the staff appeared to be buried in customers, so we left with just our experience and headed on to the City By the Bay.