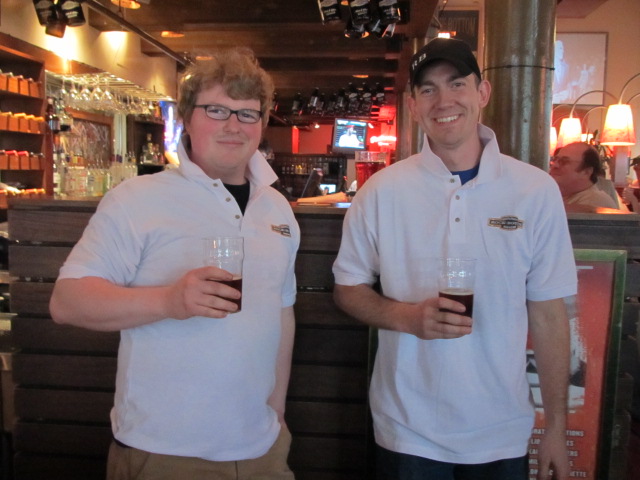 Continually coming up with excellent beers along with their corresponding beer names, Old Town Brewing’s Bolt Minister recently collaborated with Rock Bottom’s Charlie Hutchins on Saved by the Helles. This collaborative brew that took place at downtown Portland’s Rock Bottom will also be host to the beer’s release on Thursday, August 14th beginning at 5:30pm.

This project cam about when earlier this spring Old Town Brewing were given the opportunity from the USDA experimental hop program to use some high alpha Perle hops that are being bred. Like any brewery, Old Town jumped at this opportunity but hit a stumbling block when they were told that they were whole leaf hop and not the pelletized hops that Old Town’s brewhouse performs best at. Having formerly brewed under Hutchins at Rock Bottom, Minister immediately went to Hutchins to get this collaboration in gear since Rock Bottom’s brewhouse does just fine using whole leaf hops.

Minister adds, “The ensuing collaboration brew came together quickly as we both wanted to brew a lager and let the hops be the most expressive element in the beer. We decided to brew a Munich-style Helles which of course would be named Saved by the Helles to pay tribute to everybody’s favorite teen crew from Bayside High School.”

Here are the specs on the final beer:

Beer Name: Saved by the Helles

Beer Description: A classic German light lager brewed with experimental Perle hops. The resulting beer is light and crisp with a subltle malt body from premium German Pilsner and Munich malts. The aroma from the experimental hops is slightly spicy and finishes with a lovely herbal character that lingers on the palate.  Brewed in collaboration with Rock Bottom Brewing in Portland to pay homage to Zack, Slater, Kelly, Jessie, Lisa, and of course Screech. Best enjoyed while singing the Bayside Tigers fight song.