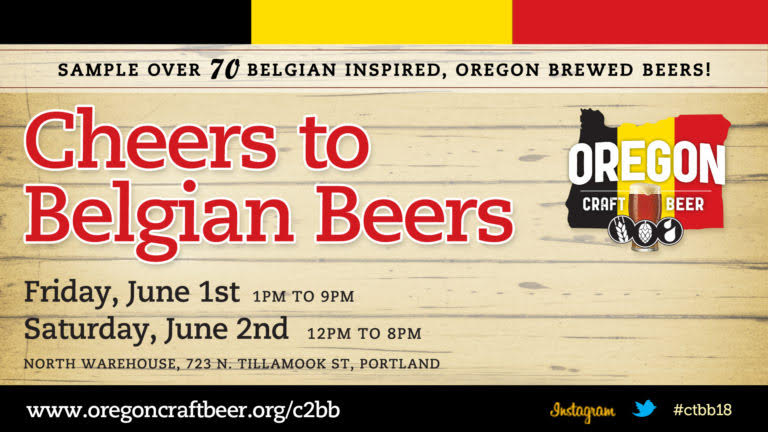 The 12th Annual Portland Cheers to Belgian Beers returns to The North Warehouse in North Portland from June 1-2, 2018. For the annual event that is hosted by the Oregon Brewers Guild, expect approximately 75 Belgian-style beers brewed by Oregon craft brewers.

This year’s Cheers to Belgian Beers will feature two different yeast strains, Precious and Suburban Brett. The hours of the festival are from 1pm to 9pm on Friday and 12pm to 8pm on Saturday.

Each brewery’s submitted beer is based on a dart throw that took place in January 2018 at Gigantic Brewing and Baerlic Brewing. Rhe color and strength of each brewery’s beer is determined by a dart throw. Depending on where the dart lands on the board determines whether that brewery will brew a Belgian-style beer that is light or dark in color, with amber as the midpoint; and low or high in alcohol, with six percent being the midpoint. Breweries that hit a bullseye get a wild card and can select their own color and strength.

Advance discount tickets are on sale now at GetMyPerks, which is offering two tasting glasses and 16 drink tickets for $28 (a $40 value), while supplies last. Drink packages at the door will cost $20 for a souvenir beer goblet and eight drink tickets (only one glass and eight tickets will be sold to any one person at any one time).

The festival is donating $1 from every ticket package sold to House That Beer Built, a partnership between Habitat for Humanity Portland/Metro East and the local craft beer industry. This exciting new collaboration celebrates the strength and creativity of Oregon’s craft beer industry, along with its passion for community involvement. Participating breweries and businesses pledge to raise funds with the goal of collectively raising $75,000 to fully sponsor a home for a Portland family.  Learn more about Habitat’s work at Habitatportlandmetro.org.

What makes this festival stand out is the fact that every beer is potentially made using the same primary yeast strain: Precious. Precious is a classic Belgian yeast that features a very mild phenolic character balanced with moderate fruitiness. This year, brewers were also given the option to add a secondary aging strain, Suburban Brett, a brettanomyces yeast that shines when used in wood barrels, producing complex and balanced aromas of sour cherry and dried fruit.

To ensure diversity among the beers submitted—as well as show off the creativity of Oregon’s craft brewers— the color and strength of each brewery’s beer is determined by a dart throw. Depending on where the dart lands on the board determines whether that brewery will brew a Belgian-style beer that is light or dark in color, with amber as the midpoint; and low or high in alcohol, with six percent being the midpoint. Breweries that hit a bullseye get a wild card and can select their own color and strength. The dart throw is held in January, giving the breweries plenty of time to determine their submission.

Portland’s Cheers to Belgian Beers takes place inside The North Warehouse as well as outside in the tented parking lot. Food is available from Urban German Grill and Monk’s Deli; Brewed Oregon will be selling Oregon craft beer gear and apparel. Street parking is available, but limited. Attendees are encouraged to take public transportation — the TriMet Bus Line 35 stops one block away and the Yellow Max Line stops two blocks away — or ride their bike, with complimentary bike parking available.

The festival is seeking volunteers, which receive a festival goblet, eight drink tickets, a t-shirt and free admission after their shift (an OLCC servers permit is not required to participate as a volunteer server at this event). To sign up, visit https://www.events-connect.com/ctbb/volunteer.

Cheers to Belgian Beers is produced by the Oregon Brewers Guild and sponsored by Boelter, Imperial Yeast, Country Malt Group, Great Western Malting, and the Portland Mercury. The event is for ages 21 and over. Follow @OregonCraftBeer on social media on Facebook, Instagram and Twitter, #ctbb18.