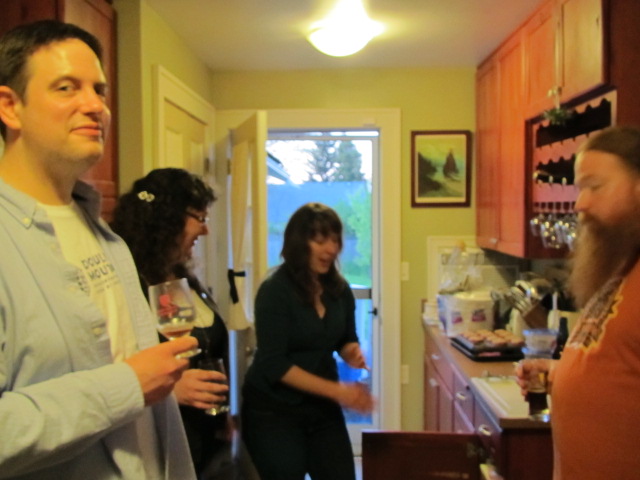 One of the best weekends of the year is Memorial Day Weekend. Not only is it a three-day weekend for most Americans, but Memorial Day Weekend also signifies the beginning of summer-esque weather. The Willamette Valley, like much of the country, hasn’t seen significant indicators that summer is anywhere near, but there are some welcomed changes evident, such as longer daylight hours, the emergence of many plants like hops, and the arrival of many refreshing seasonal brews. 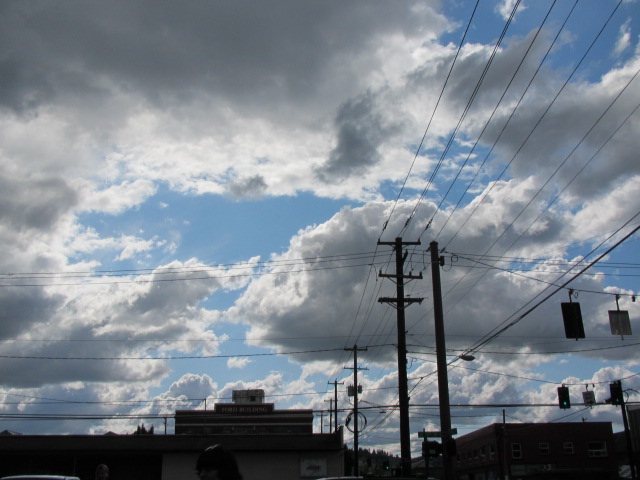 Over the weekend we mostly took it easy, taking care of some spring cleaning duties as well as relaxing with family, but a we did find time for some great beer experiences.

Friday was spent at 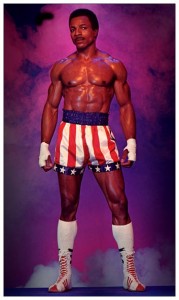 Upright Brewing bottling up some tasty and sessionable Four. Brewer/founder Alex Ganum recently made the switch to a new Illganumberg yeast strain and more efficient dark brown bottles. The flavor of the new yeast is quite spicy and refreshing and is somewhat reminiscent of the De Ranke strain. Lots of one-offs have been making their way down the pipeline at Upright including Jaune Quatre. Meaning “Four Yellow” in French, this unique brew is a gin barrel-aged sour rendition of the popular Four, a wheaten light ale. As another twist, the Jaune has chrysanthemums added for a delightful bouquet. A limited run of 65 bottles were put forth by the brewery as a part of their Sole Composition series. Down the road we’re highly anticipating the return of Upright’s Reggae Junkie Gruit for the North American Organic Brewers Festival (June 24-26 at Portland’s Overlook Park), as well as the arrival of a new beer known as The Stout of Monte Fisto American Imperial Stout brewed with pugilistic Apollo hops (also look for a dry-hopped cask version of this stout purported to be dubbed “Shawn Kelso Ale” after Barley Brown’s brewmaster and purveyor of all things hoppy). 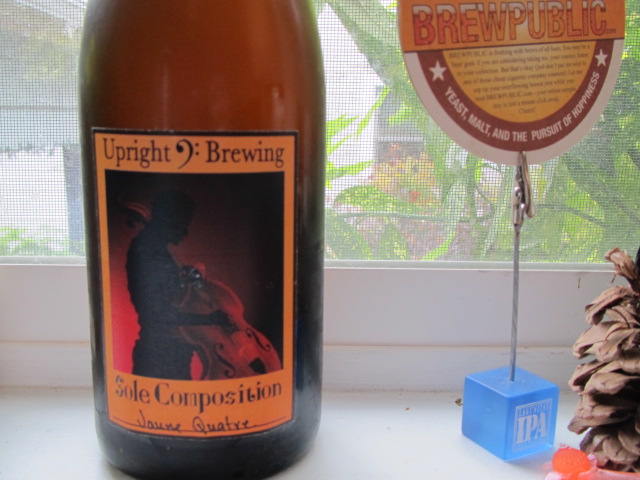 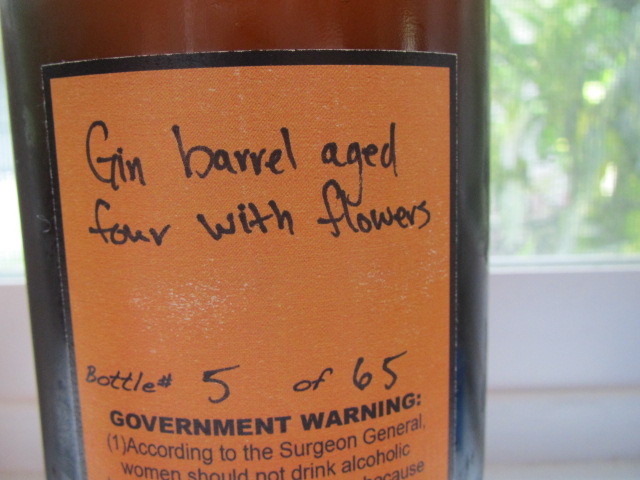 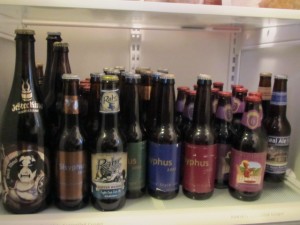 Our beer loving friends Charles and Teresa Culp hosted a Texas beer tasting at their home in Northeast Portland. Both are natives of the Lone Star state, offering a great variety of Texas-brewed craft beer that they brought with them. In this potluck of food and beer, friends also shared some Texans treats of their own at the beer round-up. Highlights of the evening included Shiner Ruby Redbird, a light summer ale brewed with Texas ruby red grapefruit, Real Ale Prickly Wit (brewed for the 2007 Craft Brewers Conference), 2005 Jasperilla Old Ale, Rahr and Son’s Snowmageddon, and Jester King Black Metal Imperial Stout (despite having one of the scariest labels in recent memory). Food highlights included a spicy smoked pepper vegan chili made by Wildwood chef Paul Kasten, vegan cornbread made by Margaret Lut, and a wonderfully warm salsa concocted by Bill from It’s Pub Night. 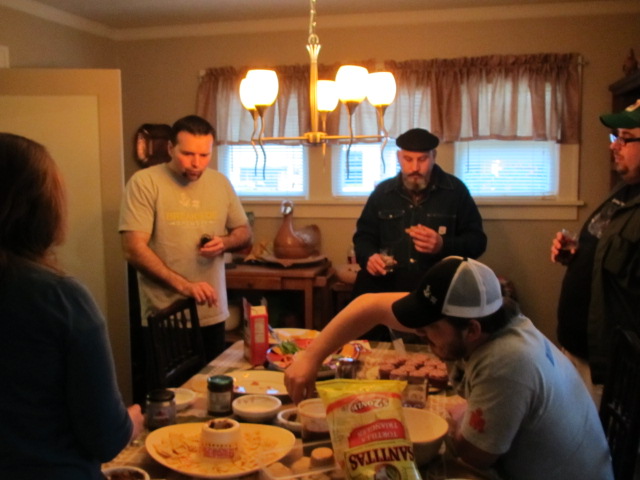 Sunday was spent running the bottle shop at Vancouver, Washington’s By The Bottle for our friends Dave and Arlene Nunez. On a particularly slow afternoon, we were able to slip away for a few moments and check in on the progress of nearby brewery-in-progress, Mt Tabor. Founder/brewer Eric Surface has much of the big work out of the way and is anticipating putting tiles down on the floor this week, as well as getting his brew system installed. Mt Tabor Brewing will be just a block from By The Bottle and Salmon Creek Brewpub, making downtown Vancouver even more of a craftbeer lover’s destination. 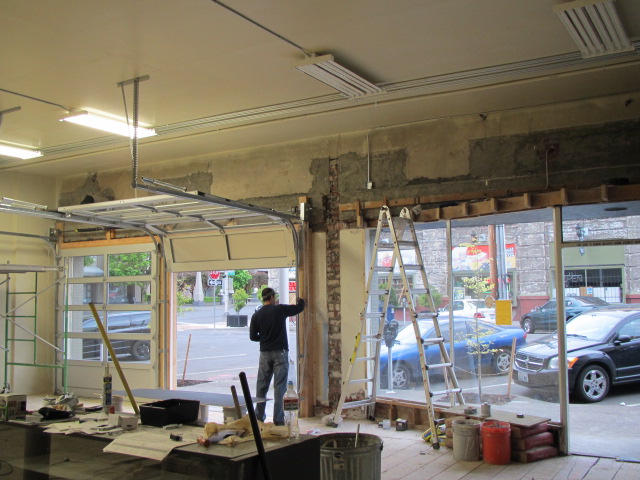 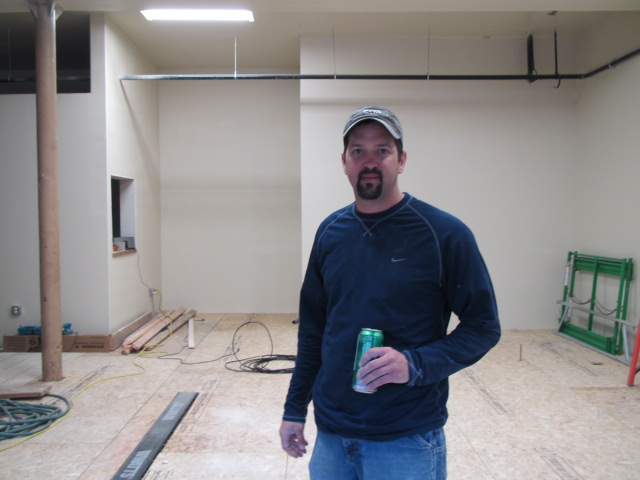 At By The Bottle, many a tempting brew awaits thirsty patrons’ palates. Over the weekend, some tap highlights included Midnight Sun Fallen Angel, Chuckanut Kolsch (one of the best of its style anywhere), Double Mountain IRA, and Firestone Walker Double Jack IIPA. While we were there, M.T. Head brewer/Plato Republic’s Marc Martin stopped by to deliver kegs of Twisted Head IPA and Dark Marc Cascadian Dark Ale for a special tasting going on tonight, Tuesday May 31 from 5-7PM. Seems there’s always a good excuse to get over to By The Bottle. You can always find a decent selection of brews that are not distributed in Oregon. So, fans of something new and interesting can always, like their mantra says “Discover Great Beer.” 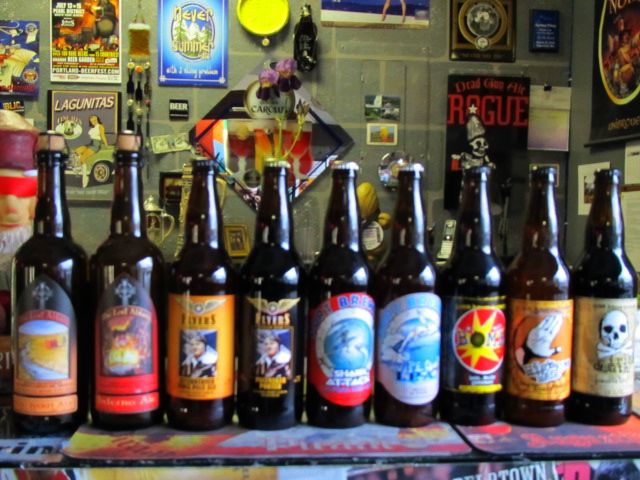 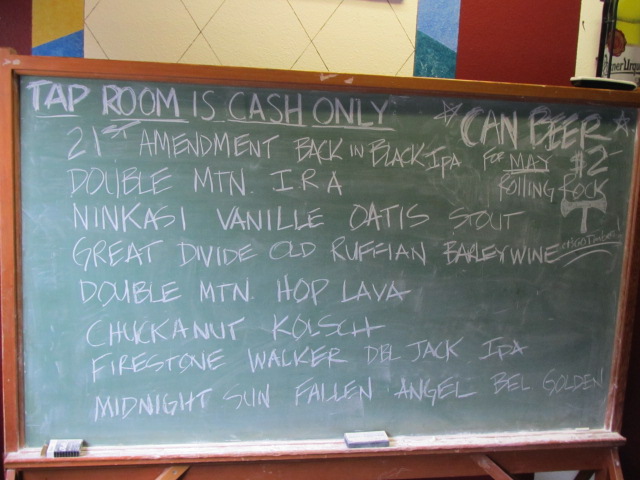 Sunday evening was spent watching Mad Men season 4 at home over a homemade pizza paired with Spanish craft beer. Spanish craft beer? Really? Yep. Leave it to Shelton Brothers to import it. Lupulus was a light bodied “Iberian Ale” from Cerveza del Montseny of Seva, Barcelona, a municipality in the comarca of Osona, Catalonia. This 5.1% ABV ale purchased at Belmont Station might have taken a little beating from its long journey across the pond, then across the continent, but they valiant and bright hop character certain withstood the voyage. Further, the beer was a great match with pizza, highly recommended. 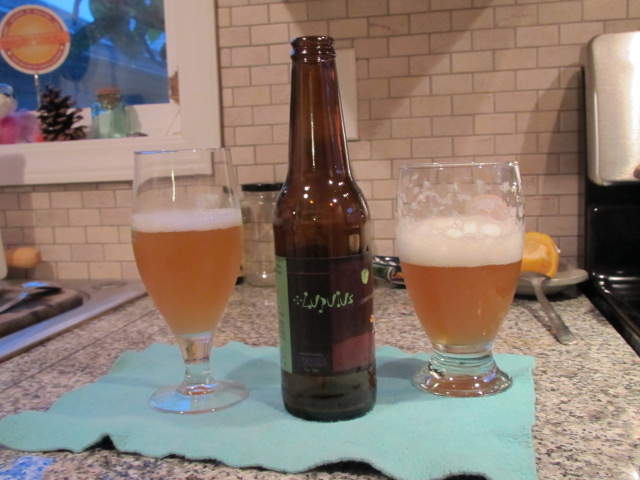 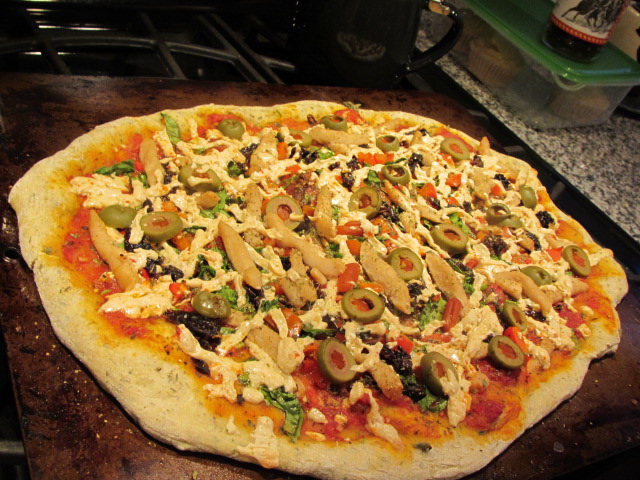 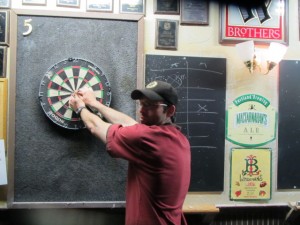 The weekend rolled on an extra day thanks to Memorial Day. We took advantage of the situation and caught up with family and friends. We hit up a few of our favorite Southeast Portland pubs including Blitz Ladd Sports Bar, The BeerMongers, APEX, and The Horse Brass. At these fine establishments we were able to try an assortment of beer ranging from $2 Black Star Lagers at Blitz while shooting pool and playing table shuffleboard, Caldera Pale Ale at Mongers while taking in some Mariners baseball on the big screen, Russian River Blind Pig and Sierra Nevada Southern Hemisphere at APEX while enjoying a moment without rain on the spacious patio, and Deschutes Twilight Ale at the Brass while tossing darts. 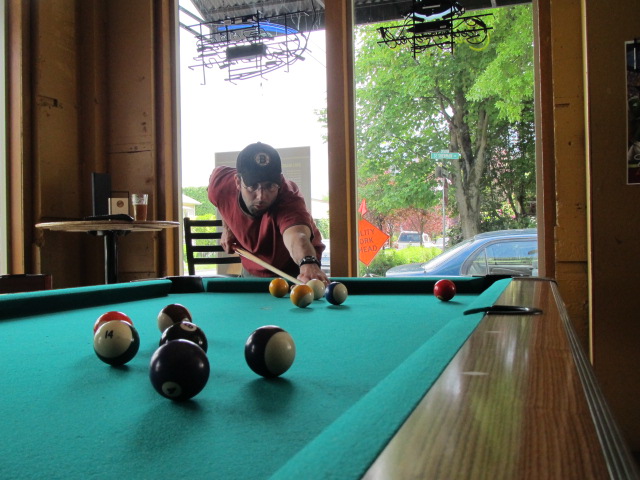 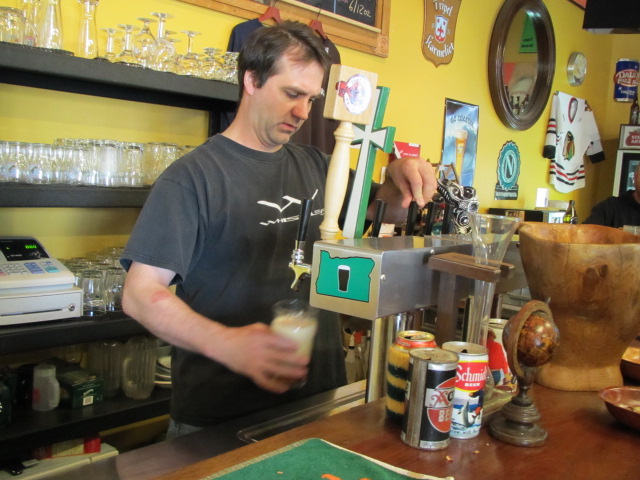 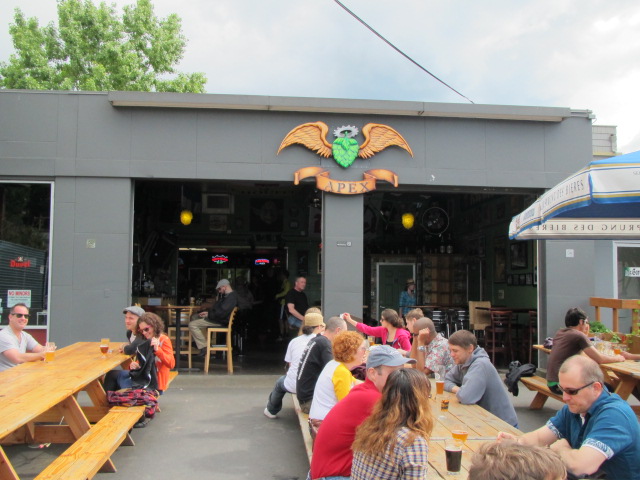 All and all it was a weekend for the books. Looking forward to the arrival of spring sometime later this summer. Cheers! 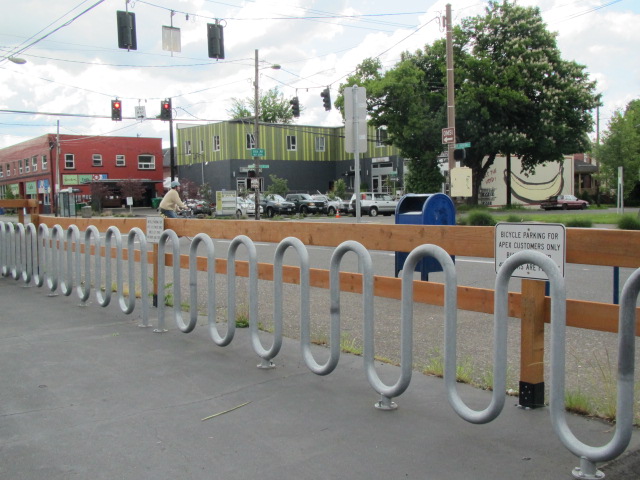