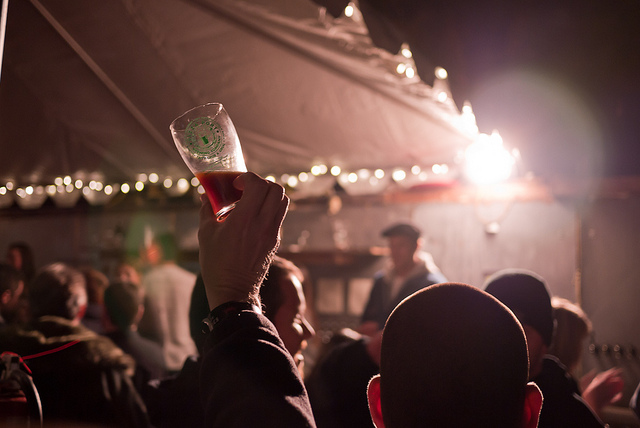 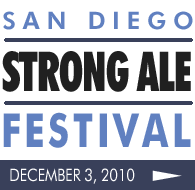 It seems that the Portland Holiday Ale Fest was another rousing success in 2010, and if you follow the beer news from around the Northwest, you certainly were privy to the Good, the Bad, and the Ugly. We heard good things about this year’s version of Very Ill Tempered Gnome, so I hope that was the consensus by fest goers this year. Next year, Oakshire is going to kick things up a few notches and send something even more unique and special (I just haven’t a clue what that is right now, but you’ve got my word!) So, with all the great reports of wonderful beers consumed, it is with deep regrets I tell you that I had to miss this year’s HAF. But shed not a tear folks, for I was basking in the warm glow of the Southern California sun and attending the San Diego Strong Ale Festival. Let me tell you a bit about my trip and Oregon’s representation in SoCal.

I am fortunate to have befriended Jeff Bagby,Pizza Port’s head brewer and director of brewpub operations. Yes, he’s the man who just won back-t- back Great American Beer Festival Large Brewpub of the Year awards. Besides being one hell of a brewer, Jeff, along with his fiancee Dande (and their three beagles) are incredibly nice people and they welcomed my family and I into their home for the better part of the week. I also made the trip to brew with Jeff at Pizza Port Carlsbad where he mans the mash paddle. 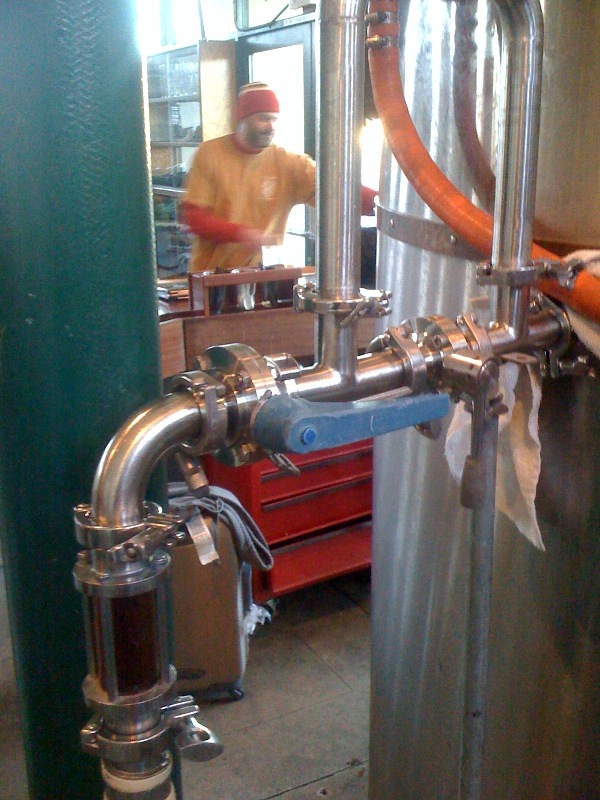 If you are unfamiliar with Pizza Port, it is a casual (read: park your surf board outside, put on your flip flops, and grab a slice) brewpub with walk-up counter service. Communal picnic tables fill the center of the pub and a row of video games helps promote the family friendly vibe. But the true stars here are the beers. The original location began in Solana Beach and was then headed by Tomme Arthur of Port Brewing and the Lost Abbey. Along with the Carlsbad location, Pizza Port has added a San Clemente location (2010 GABF Small Brewpub of the year) and most recently an Ocean Beach location. All of the Pizza Port Pubs make outstanding beers and also carry an array of some of the best guest beers to be found in California. It is certainly worth a beery road trip if you get the chance. 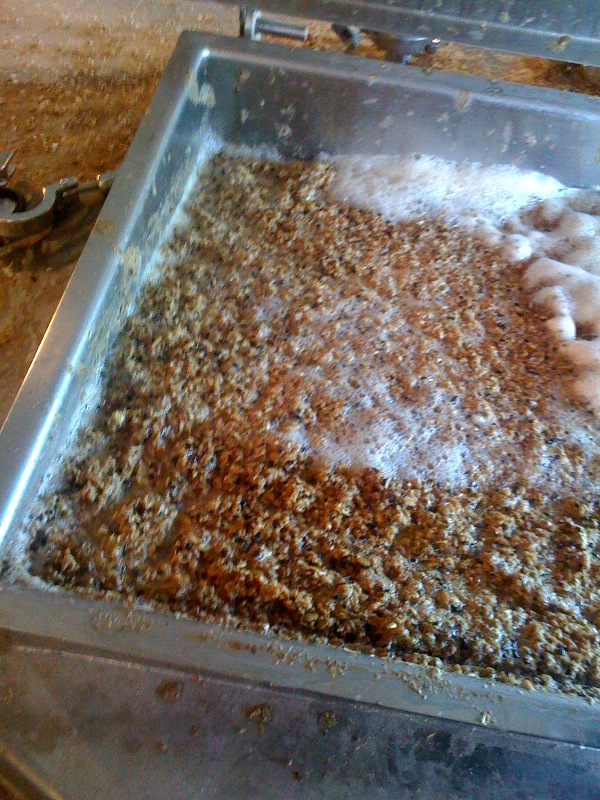 The beer we collaborated on was a big brown ale. You might call it an Imperial Brown Ale or an American Brown, but of course, pigeon-holing it into an established style would be too constrictive. It will be a complex brown ale (using 10-11 different malts) with an ABV of about 8.5-9% and a moderate amount of American hops (Columbus, Bravo, Simcoe, Cascade, and Amarillo). The name is pending, but it will be a great beer regardless. And it was great fun being a guest brewer and working on a different brewing system.

The other reason for making the trip (besides shedding the 40 degree rainy weather for some shorts worthy sunshine) was to attend the Strong Ale Festival. Held each year on the first weekend of December, PP rolls out 80 some beers that are all over 8% aABV. Many beers were from California, of course, but beers were also shipped from Ohio, Chicagoland, and Oregon. Seven breweries from Oregon had beer there; I must say that the quality was exceptional and Oregon was well represented. I even got a short chance to hang out with former Californian and current Eugenian, Jamie Floyd of Ninkasi. Yes, it is true, Ninkasi IS everywhere! The fest provides a VIP session from 1-4PM on Friday where all beers are on tap, 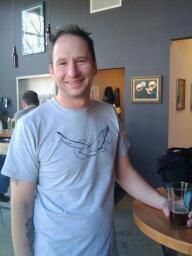 but about 15 very rare and small quantity beers were poured as well. Many were barrel aged or vintages from some of the best breweries in California. We provided a 5-gallon keg of Pinot Barrel aged Collaborative Evil 2009, the same beer featured at Bailey’s Belgianfest, for the VIP session. The general admission for the fest ran from 4-11PM on Friday and from 1-11PM on Saturday. The cost was $40 for the VIP session and $30 for the General. An entrant got a nice logo glass along with eight 4-ounce taster tickets and a program. Additional tasters were $1. So, it was pretty much the same as we are used to in Oregon. A fest goer could also get started on Friday and re-enter to “finish” on Saturday thereby spreading out the stong ale intake. Food is also served throughout the fest outside as well as inside. Normal pub business goes on inside while co-founder Vince mans a few smokers in the parking lot, including one that is a Traeger Trailer smoker that could certainly handle the whole hog. Pizza was put out for free during the VIP session and Pulled Pork, ribs, and other tasty morsels were for sale throughout the festival to keep the extra beer soaked up. I was fortunate to get some of the ‘back stage’ special items, like a smoked bison loin with a reduction sauce and a crown roast loin of pork that was simply melt in your mouth tender. Hundreds of people enjoyed these big beers over the two day festival. With the sun warming our backs and the sandy beach just three blocks away, it was quite an atmosphere. If HAF is your go-to winter beer fest, consider attending Pizza Ports other great fests held at their breweries including Belgian Fest, Cask Ale Fest, and a Hop Fest, featuring many fresh hop beers. The California sun and quality strong beer is a perfect pairing in my book. 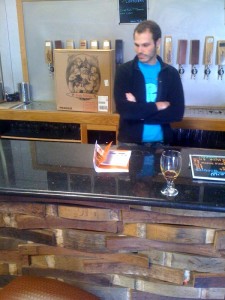 The Strong Ale Fest in Carlsbad is not just ‘work’ for this slave to the beer. My family was able to fly in on Thursday and spend some time in the sand and eat some of the best fish tacos ever at South Beach Grille in Ocean Beach. The Jeep Wrangler that the rental car company accidently gave us seemed the perfect Southern California Ride. My seven and five year old were certain we needed to keep it, even without any power windows and locks which they thought were new features on cars! During my touring I also visited Tomme Arthur at Lost Abbey Brewing and saw all the recent expansion going on there. Barrels, barrels, and more barrels. What a place! Lost Abbey and Port Brewing are just a bit bigger than us (Oakshire) and it is interesting to see things like the new packaging line and a mature barrel aging program. Ideas are bouncing around in my head of course. And not to be out done, I took my first trip to The Bruery in Placentia. What great people there and great beer!  We’re fortunate that they are distributing in Oregon. If you haven’t had the chance to try much Lost Abbey or The Bruery beer, you should check out the unique and creative things going on there.

So now it’s time to get back to the gloom, pull a pint of great Oregon-made beer and think about how I can construct a never-before-seen beer for Holiday Ale Fest 2011. Only 11 months to go…..