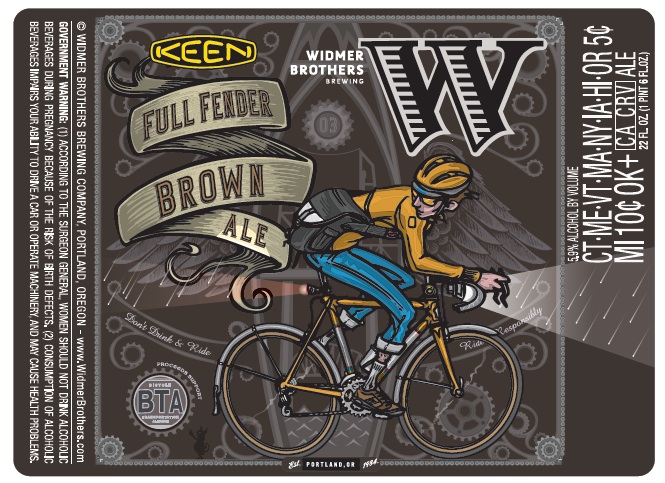 Portland, OR – March 10, 2014 – This week, KEEN Footwear teamed up with Portland-based Widmer Brothers Brewing to launch a limited-edition, small-batch beer to raise awareness and membership for the Portland Bicycle Transportation Alliance. The Full Fender Brown Ale debuted Tuesday, March 4, at a business-to-business event hosted by KEEN at its Pearl District headquarters. Since 1990, the non-profit BTA has worked to promote bicycling and improve bicycling conditions in Oregon.

To raise awareness and thank businesses who signed up for corporate BTA membership, 300 bottles of Full Fender Brown Ale were distributed at the event. Each bottle includes a special label designed by artist Bill Cass.

“At Widmer Brothers, we’ve built a workplace that supports and celebrates employees who ride to work,” said Rob Widmer, co-founder. “As an avid cyclist, we’re proud to support the Bicycle Transportation Alliance’s efforts to raise awareness and encourage businesses to further embrace Portland’s bike culture with this special beer.”

“This simply wouldn’t have been the event it was without the collaborative and community-centered efforts of KEEN and Widmer Brothers,” says BTA Business and Sponsorship Manager Megan Van de Mark. “The idea started with a good beer and turned into a great event!”

Jeff Dill, KEEN’s outdoor business unit director, said, “It’s activities like these that make being part of KEEN and the larger Portland community so much fun and so rewarding. Collaborating with longtime contributors like Widmer Brothers to provide some support to a cause we both care deeply about as companies, Portlanders and cyclists, feels really good.”

About KEEN
Inspired by a love of the outdoors, KEEN Inc. manufacturer of hybrid outdoor and casual products, including footwear, bags and socks, is dedicated to creating quality products that support the lifestyles and outdoor adventures of active people around the world. KEEN products can be found online and through more than 5,000 retail locations in more than 60 countries, as well as in KEEN Garage retail stores in Portland, Palo Alto, Tokyo, Prague and Toronto, where fans can enjoy the branded experience. The company operations and culture reflect a stand-out commitment to building a strong community and a healthier planet so that all can create, play, and care. Learn more at www.keenfootwear.com.