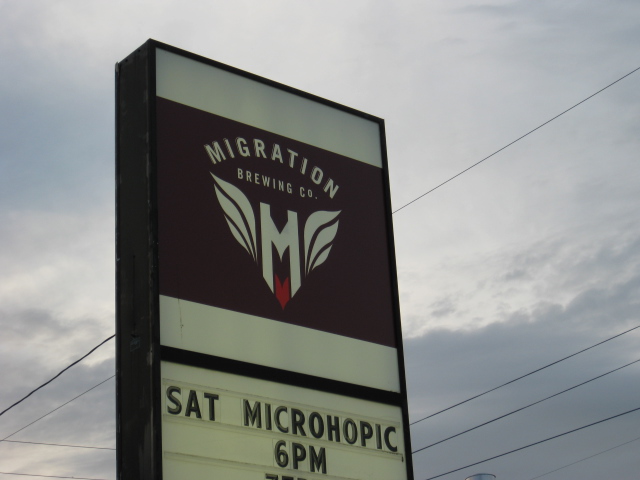 The only reason why we ask other people how their weekend was is so we can tell them about our own weekend.

Brewpublic’s MICROHOPIC 3 went down at Migration Brewing on Saturday evening, April 23, 2011. Here folks had the opportunity to try some new and tasty beers from some emerging stars in the local craft brew scene.

Breakside brewer Ben Edmunds (read the interview with him on the Brewers Association website) delivered one of the most inspiring beers in recent memory. His Rye Kölsch made with two different adjunct varietals was pumped through a randall filled with fresh cucumbers and juniper berries; melding complex flavor profiles and wowing palates. It was a beer that you might even be surprised to find at the Strange Brew Fest.

Beetje Brewery‘s Mike Wright provided what appeared to be the people’s choice in a keg of his Touch of Esen. This Amarillo hopped amber ale brewed with a De Dolle yeast prop was the first to go. Wright says he is considering making the Esen a mainstay in his lineup of brews that fuse Belgian and Northwest styles. In further exciting news, it looks as though Beetje will soon be expanding to a new Southeast location and beefing up from a true nano system to a 7-barrel brewhouse. More details to come.

Speaking of outgrowing nano palisades, Mt Tabor Brewing, who was featured at our first two MICROHOPIC installations was in the house. Brewer Eric Surface was not able to provide beer for this event due to his toils to open a new brewpub in downtown Vancouver, WA. However, he informed us that he has teamed up with other small brewers including Beetje to acquire resources needed to get things going. Hopefully by summertime, Mt Tabor will have beer available in both Washington and Oregon. Nothing is confirmed, but its got us pretty excited…

Amnesia’s dry hopped Red Handed provided a wonderful marriage of sweet maltiness and piquant hops spice. Further, Burnside Brewing‘s Adam Cassie was on hand to discuss an event favorite, the Stock Ale, a traditional chewy ESB recently released by the brewpub. Perhaps the most sessionable beer featured at MICROHOPIC 3 was the hometown tap offered by Migration. Dubbed simply as “PDX,” this hybridized rendition of a Kölsch was accented by snappy, herbaceous Sorachi Ace hops.Migration brewer Mike Branes was in attendance to elaborate on his new brew and discuss some of the progress his 7-barrel brewhouse has been making since opening just over a year ago.

All the beers delivered for this special event were of a particularly sessionable nature. None of them exceeded 6% ABV; most being below 5% ABV. Hello warm weather!

Here’s some pictures from MICROHOPIC 3: