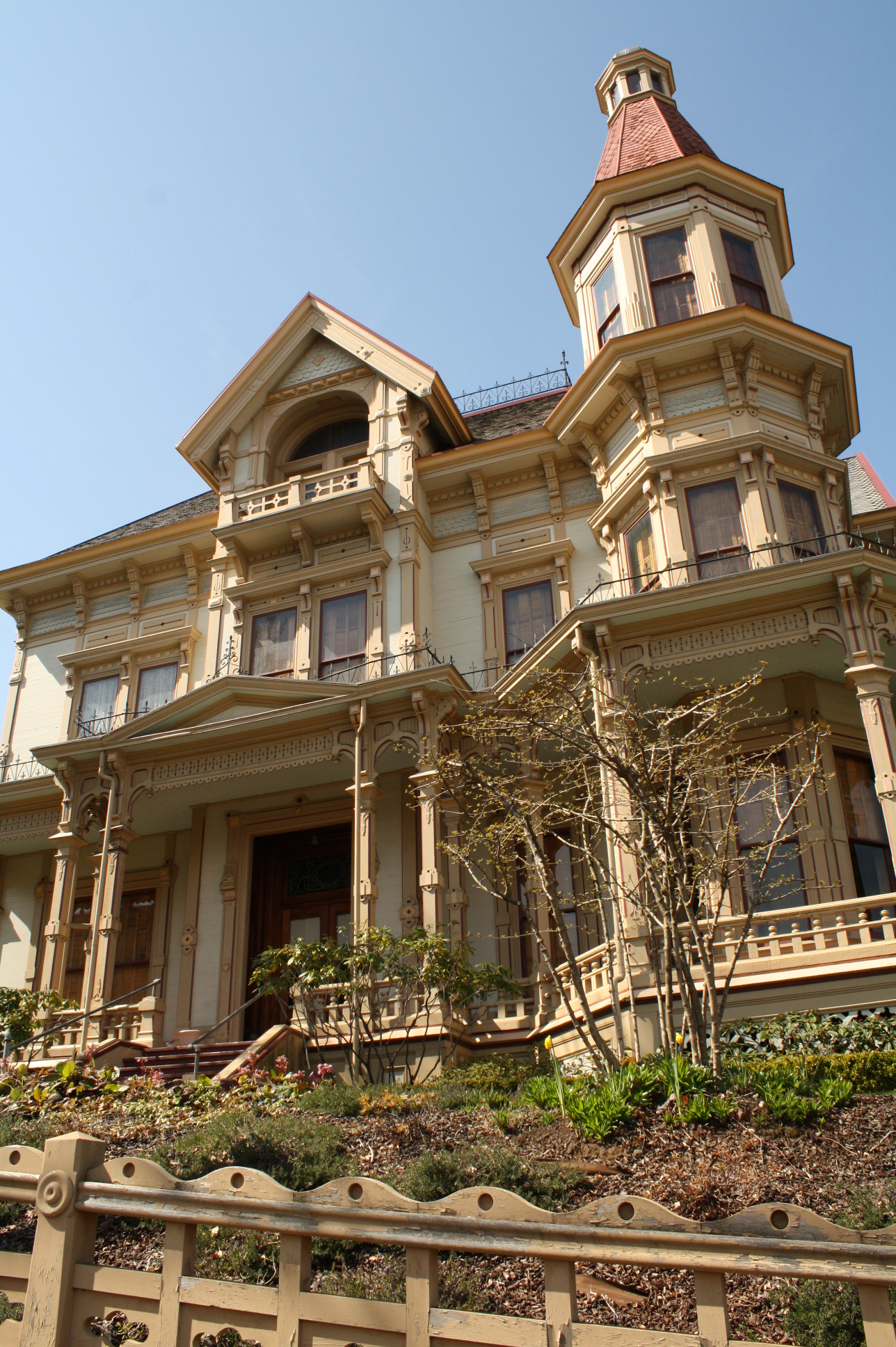 Astoria, Oregon is a phenomenal little town where a magic comes to life in real time with a rich historical presence and an abundance of gorgeous day hikes in the surrounding area. On our last visit to Astoria, beer hunting was at the forefront of our excursions, but with good beer, there must be an adequate cultural and scenic presence to enhance the impression of one’s journeys. Living in the Pacific Northwest and traveling around the country for stellar beer, it appears more times than not that the availability of quality craft beer is usually discovered in areas with a strong progressive, forward thinking presence. A town with good breweries is often a town with ambrosial restaurants and a knack for artistry and other beneficence. I have also found that most towns that feature proper craft brew also possess nearby natural areas. This theory is proven by places such as Bend, Ashland, Eugene, and, of course, Astoria. 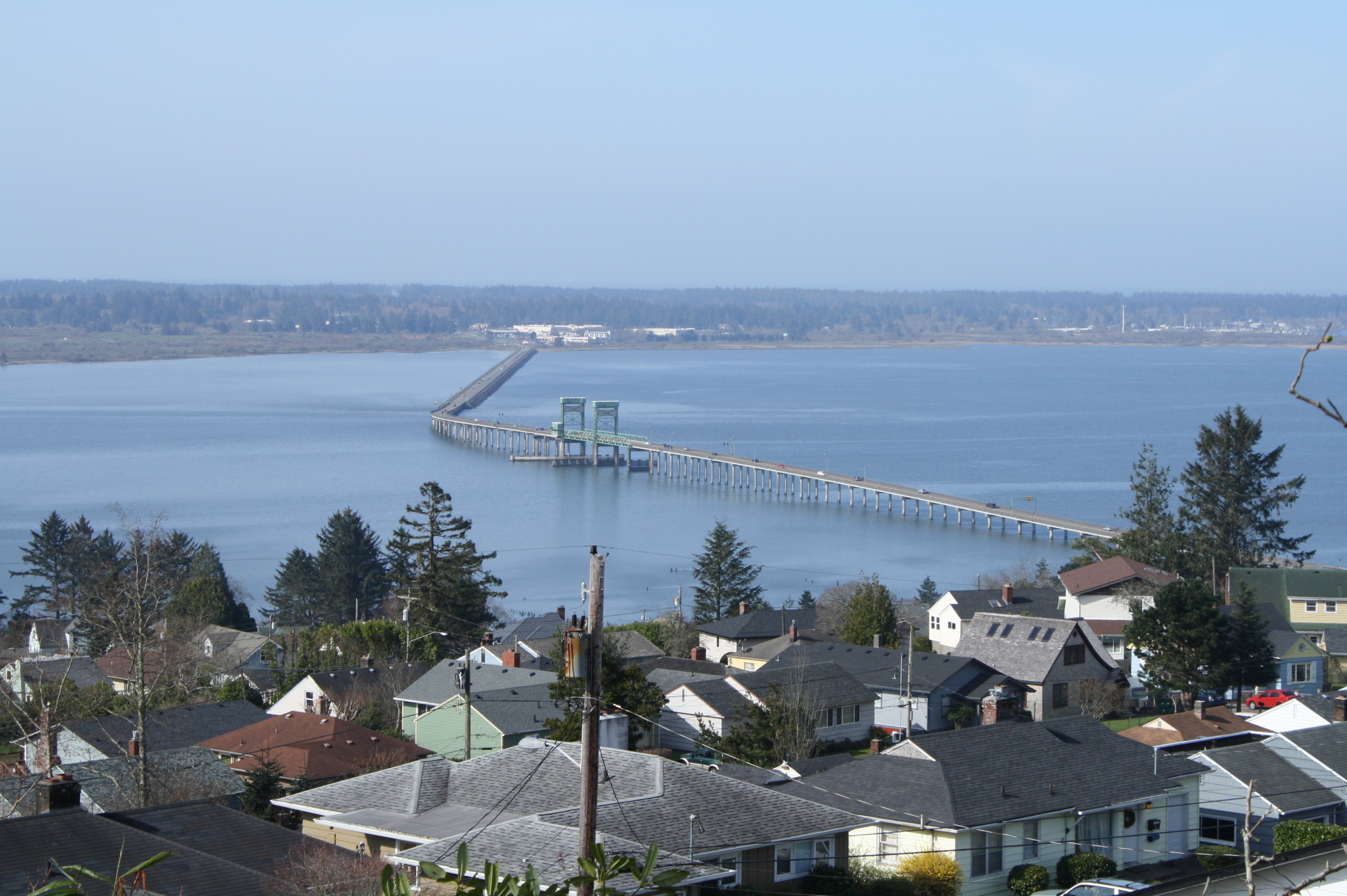 Seeing that our last venture to Astoria was compressed into a 24-hour period, our experiences were myopically engaged with, well, beer. In Jeff Alworth’s Beervana Blog, the writer says “Astoria is in some key ways like a little microcosm of Oregon.” Well, to take that even further, my trip to Astoria was in some ways a microcosm of my trip through life-a quest to get my palate around the next new brew. However, a man can not live on beer alone (an the good lord knows I have tried). There must be a cultural element, an accompaniment of sorts that enriches the beer experience and allows for the reward of great beer. For us, a trip to Astoria unquestionably relates to sipping on the beers of Fort George, Astoria Brewing, and Rogue Ales, but with these grand offerings, the physicality of the setting, the backdrop of the mouth of the Great Columbia demands equal attention. Even if this is on a somewhat subconscious level, this local color, in conjunction with someone whose company you enjoy, is a necessary component in breathing in the culture of esteemed beer. 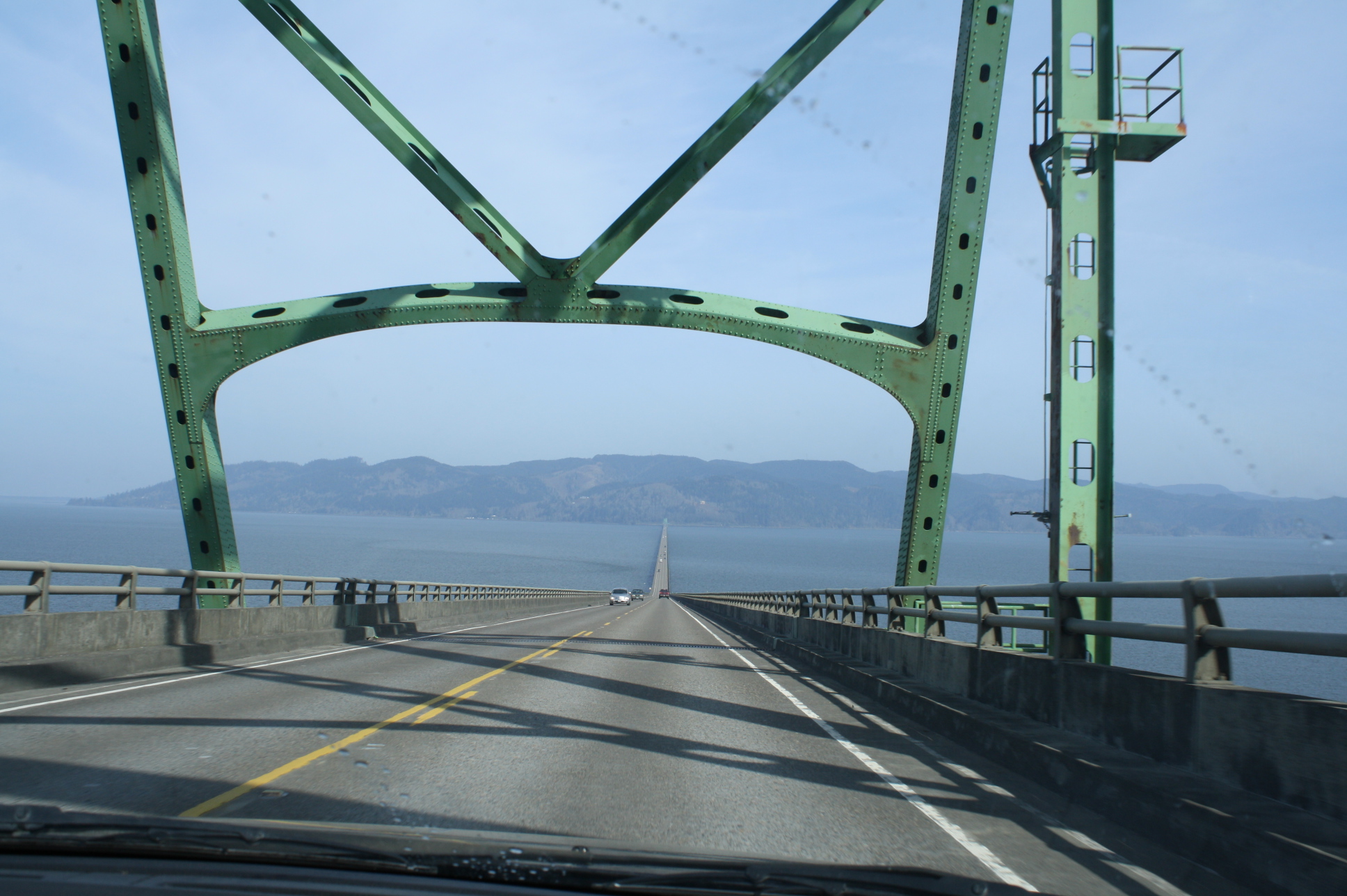 Upon waking early Saturday morning following a magnificent night on the town with our newly acquired friends, Margaret and I enjoyed the company of Rona and Skip Davis, keepers of the historical Britta Inn, over a hearty breakfast. We were pleased to set off our day with sun shining in the sky and a forecast of warm spring weather. Driving around the hills we were welcomed with spectacular views extending over Young’s Bay, the historical Canning District, and even further out across the gaping mouth of the Columbia and the looming mother off all Oregon bridges, the Astoria-Megler that is now as much as symbol of the town as the giant river itself. We drove across the nearly four miles of American’s longest continuous truss bridge while taking in the sites while the leaping waves and swooping seagulls promulgated our entrance into a world once so far from Astoria. 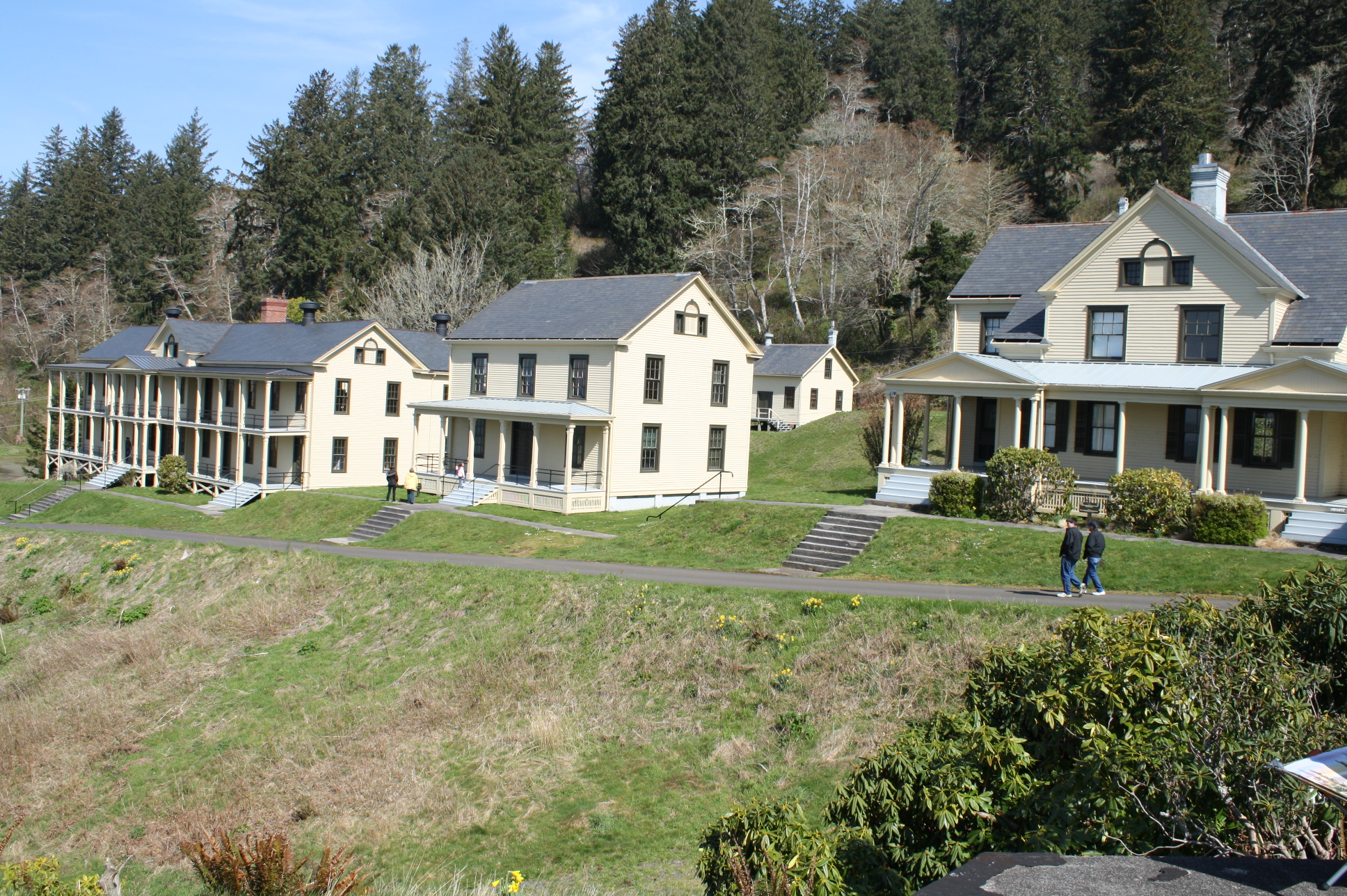 From Point Ellice, near Megler, Washington, we drove north along Highway 101 to Fort Columbia State Park, where stands one of the few intact coastal defense sites in the country. Built during the turn of the 20th 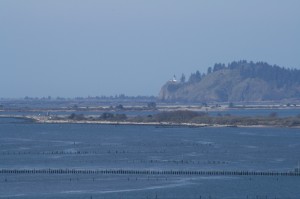 Century, the fort sits on Chinook Point and was selected for its unequivocally and incomparably stretching views. Originally inhabited by the Chinook Indians and their historical leader Chief Comcomly, following World War II, the fort was handed by the federal government to Washington. Today twelve wood-framed buildings rest at the entrance of the park at the gateway to some spectacular hiking trails. When we arrived, the wind was whipping and we bundled up to endure the potent gusts driving in from the Pacific. Little did we know, the weather would soon change to a degree not seen in this area since last summer. Our hike through riparian old growth sitka spruce and western hemlocks was breathtaking. Several bird species ranging from pileated woodpecker to red-breasted robin sounded off as we completely a nice 3 mile loop trail. After returning to the base camp, we had worked up quite an appetite, so we opted to head back to Astoria. 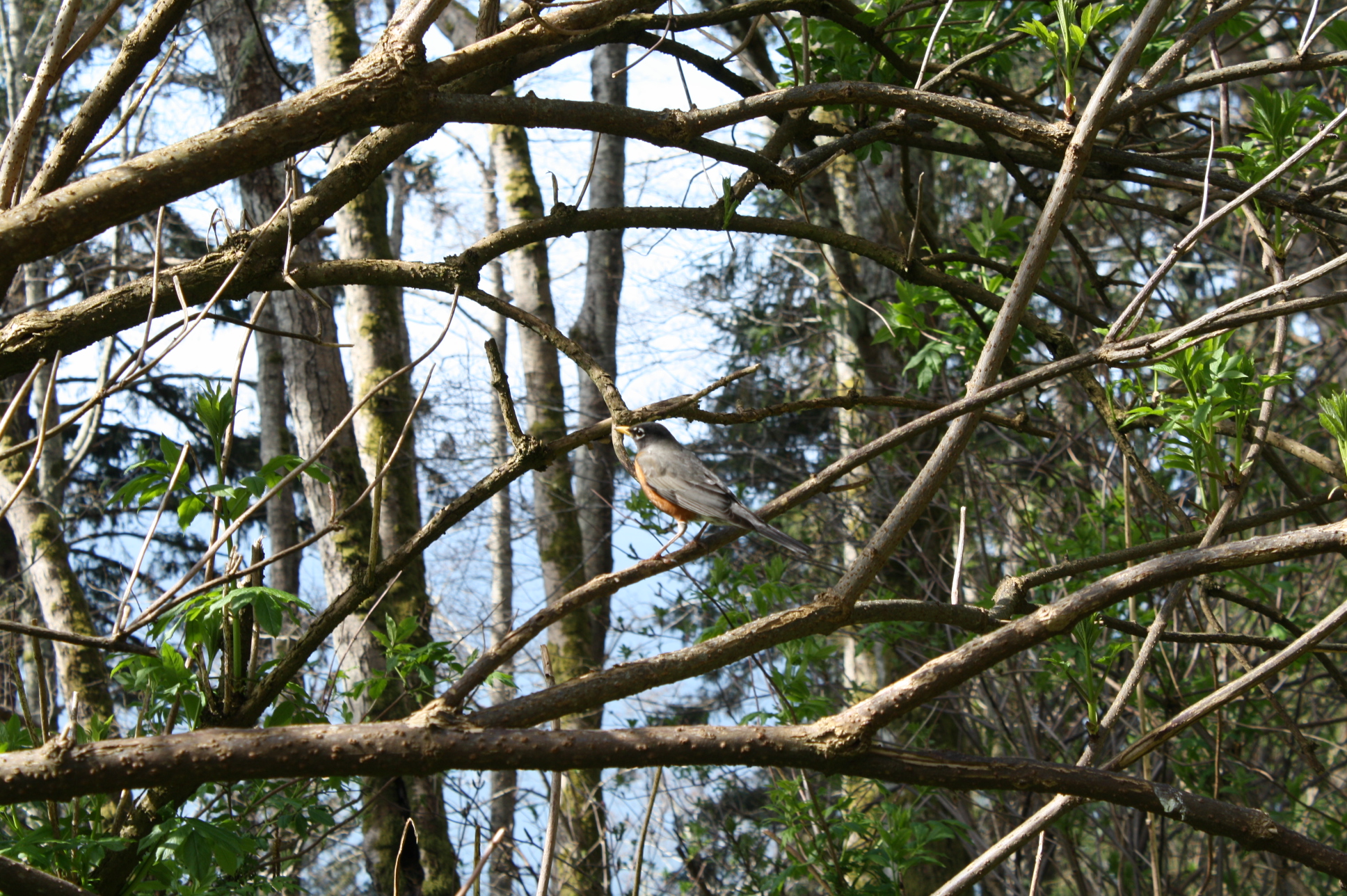 For lunch, we found ourselves at the Blue Scorcher Bakery located in the same building as Fort George Brewery. The Blue Scorcher offers a variety of foods ranging from their specialty pastries and deserts to soups, salads, and sandwiches. It is a welcomed stop for vegetarian travelers and those who simply enjoy a healthy, delicious meal. It is also a great option for those who are gluten intolerant. Their artisan breads are delectable and the their quest to use local, organic, and sustainable ingredients make them a popular Astorian destination. 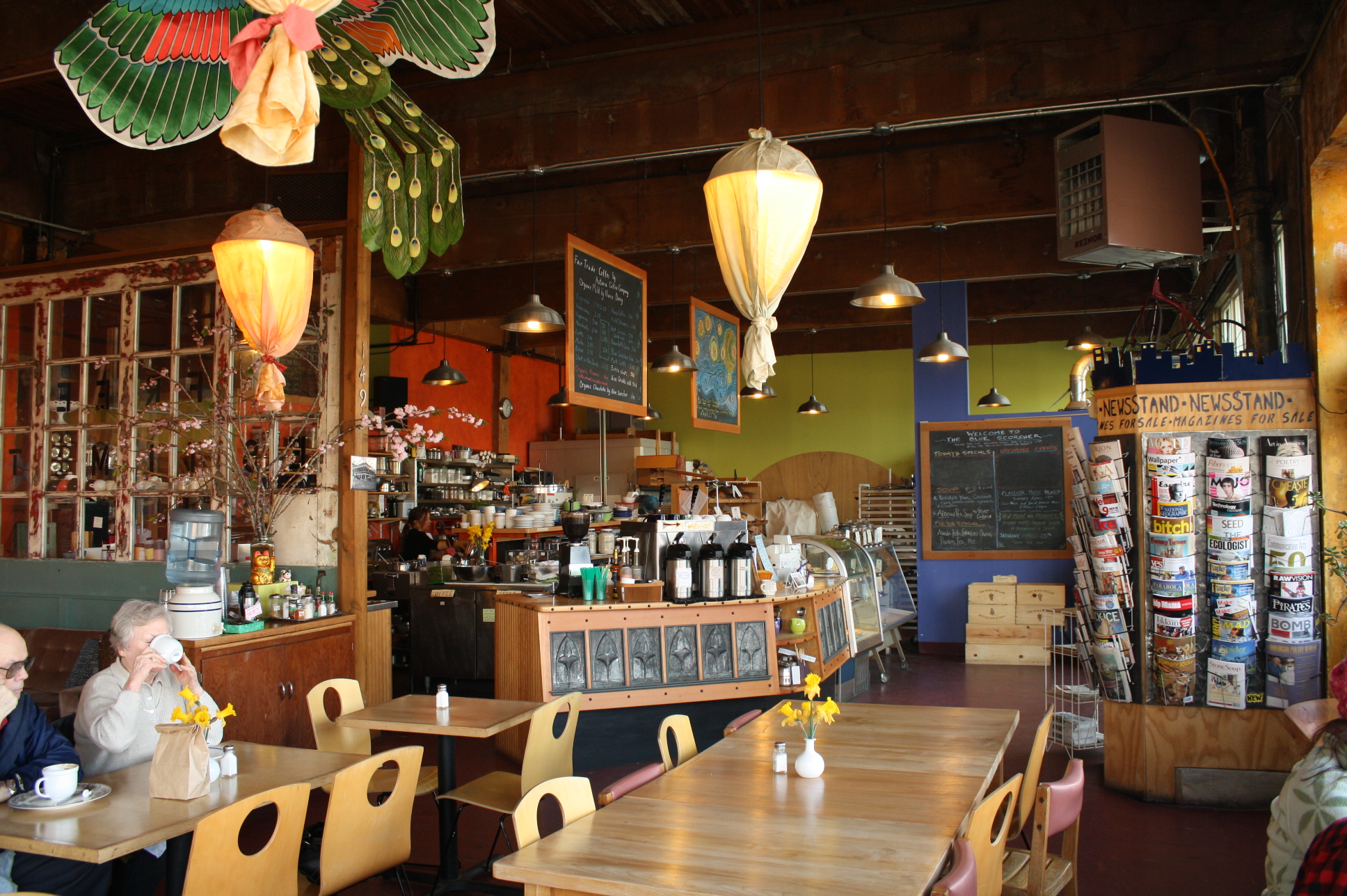 After soups and sandwiches, we ducked in next store to grab a couple growler fills from Fort George. A Oatmeal Pale ale and a bourbon barrel-aged Cavatica Imperial Stout would be taken home as well as a 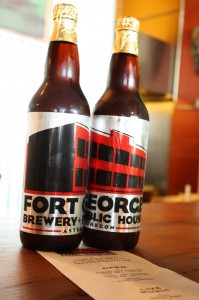 bottle of Grand Crue for later enjoyment. We thanked our friends Chris and Dan at the brewery for their hospitality and showing us a great time before heading off to get a close up look at the Goonies house. From 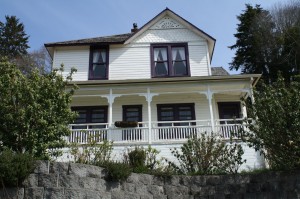 there, we were reminded of our favorite thing to do in Astoria out side of the whole beer shebang-visiting the sea lions. From atop the hill overlooking Pier 39, you can hear the barking of the giant pups huddled together on a few docks soaking up the warm sun. Down to the pier for a closer look, we joined the ranks of a good sized congregation of folks with the same plan in mind. People young and old stared and commented on the beautiful arfing mammals. Seen by many as a nuisance and a financial burden, the supposed overabundance of these creatures would seem a symptom of the doings of human beings. Most of the sea lions were branded with numbers to identify them. I found this to be troubling, but the presence of these mustached rascals and their howling chorus of honking barks couldn’t help but make me smile. 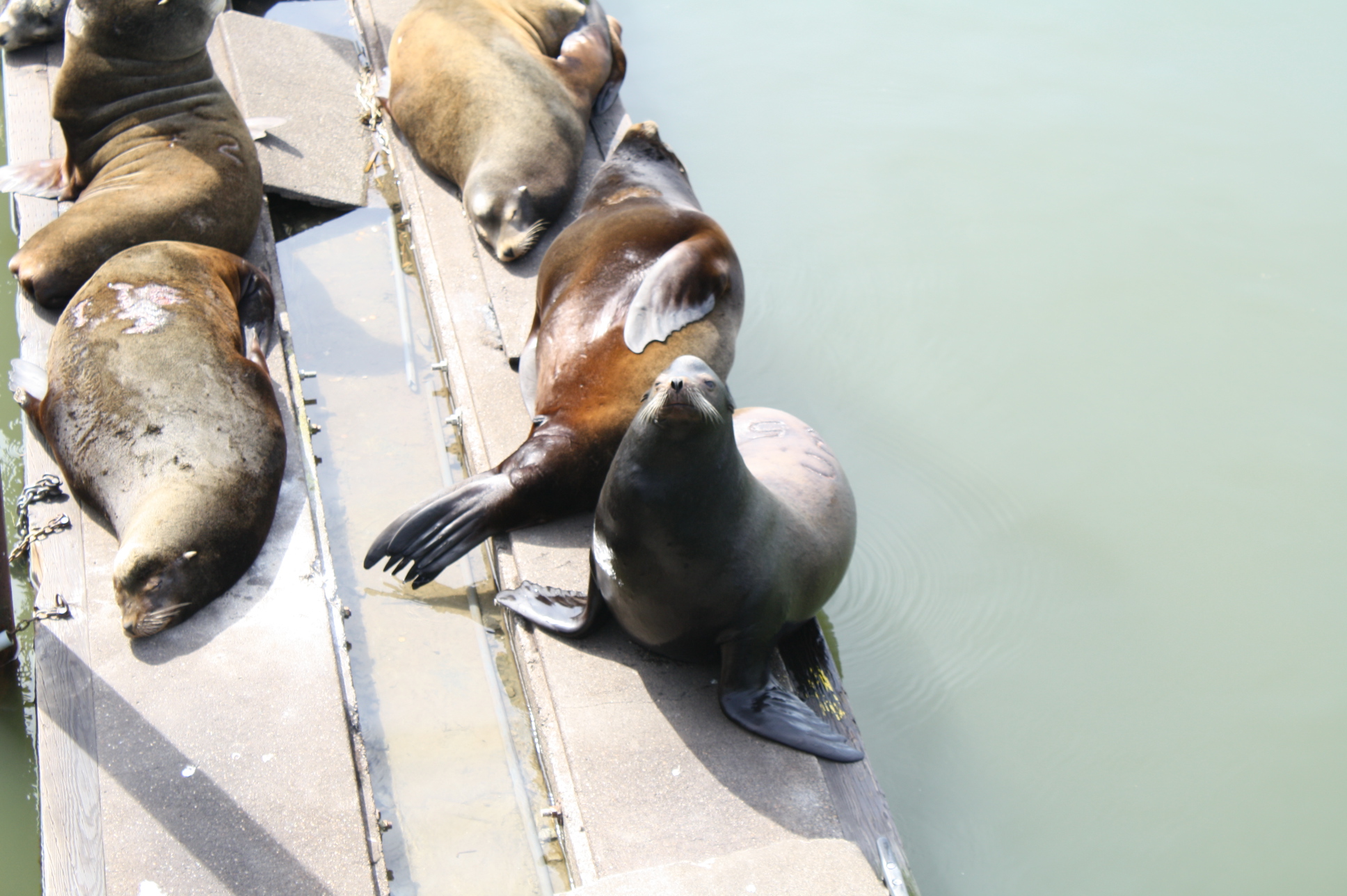 After a trip to see the sea dogs, the sun was even warmer over us in the sky, and a trip next door to Rogue’s Public House on Pier 39 was more than fitting. If our trip wasn’t great enough already, we were pleasantly surprised to discover a garage sale at the pub featuring $24 cases of Yellow Snow IPA. One of those for the road, please. 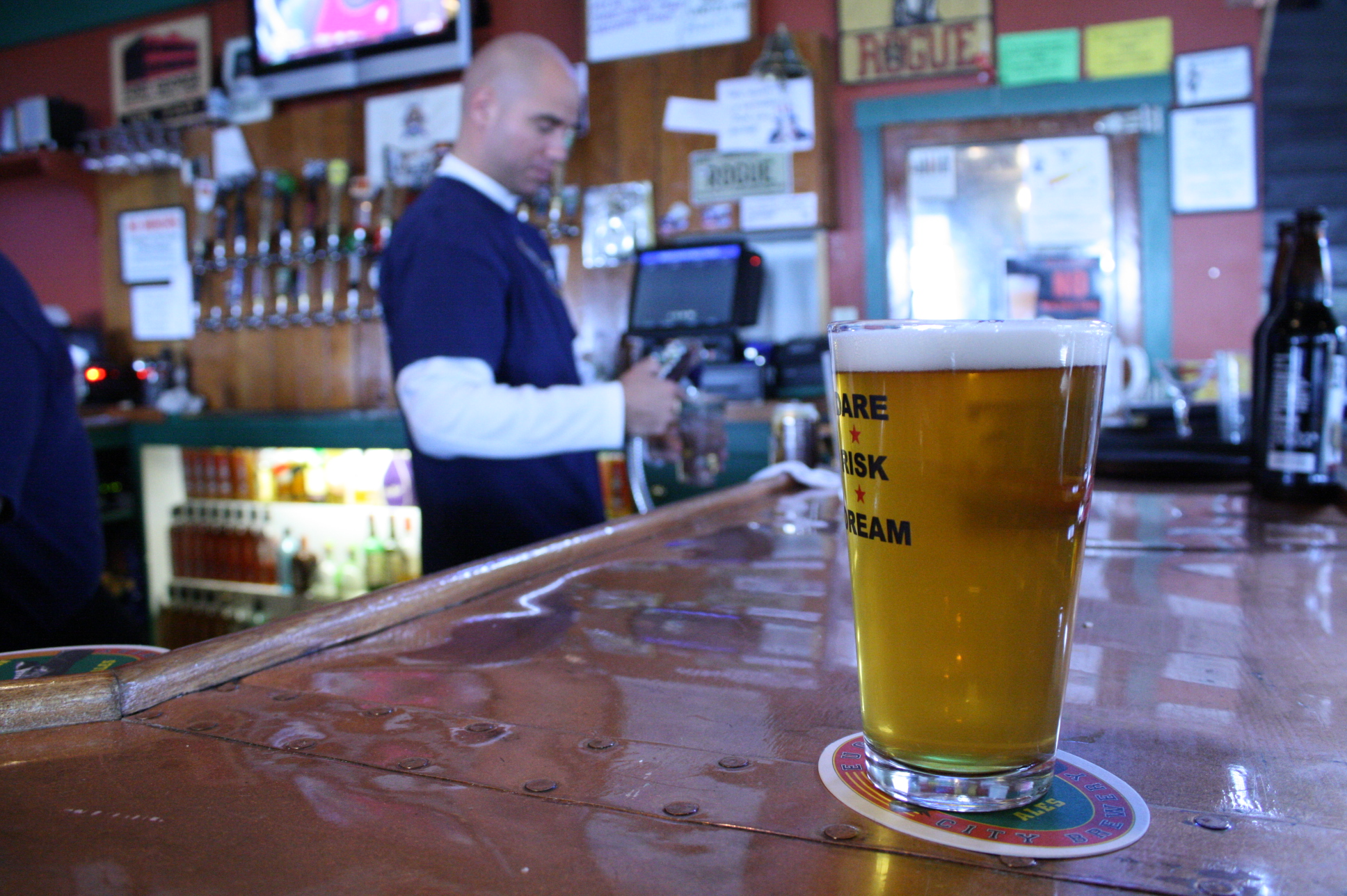 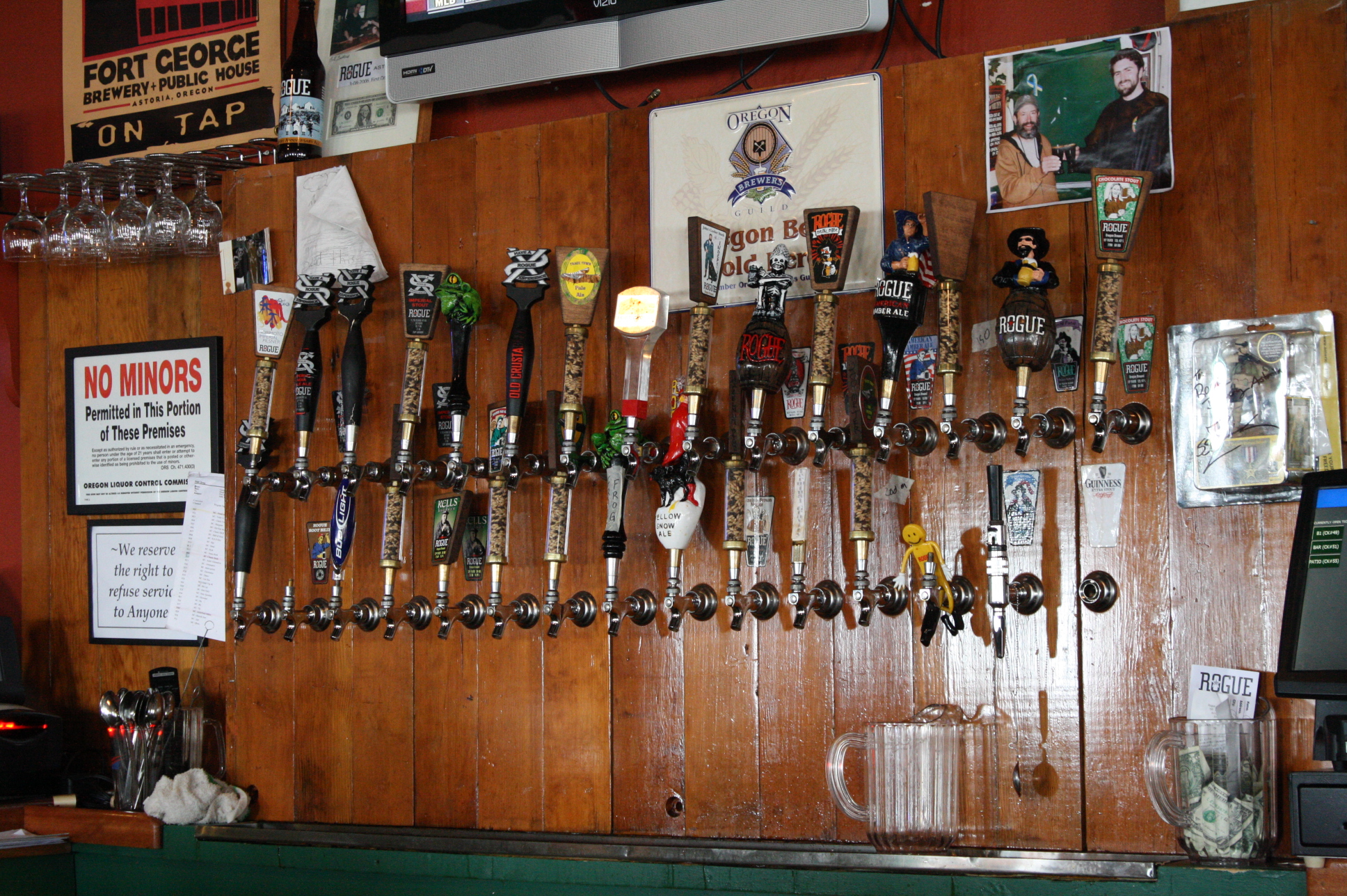 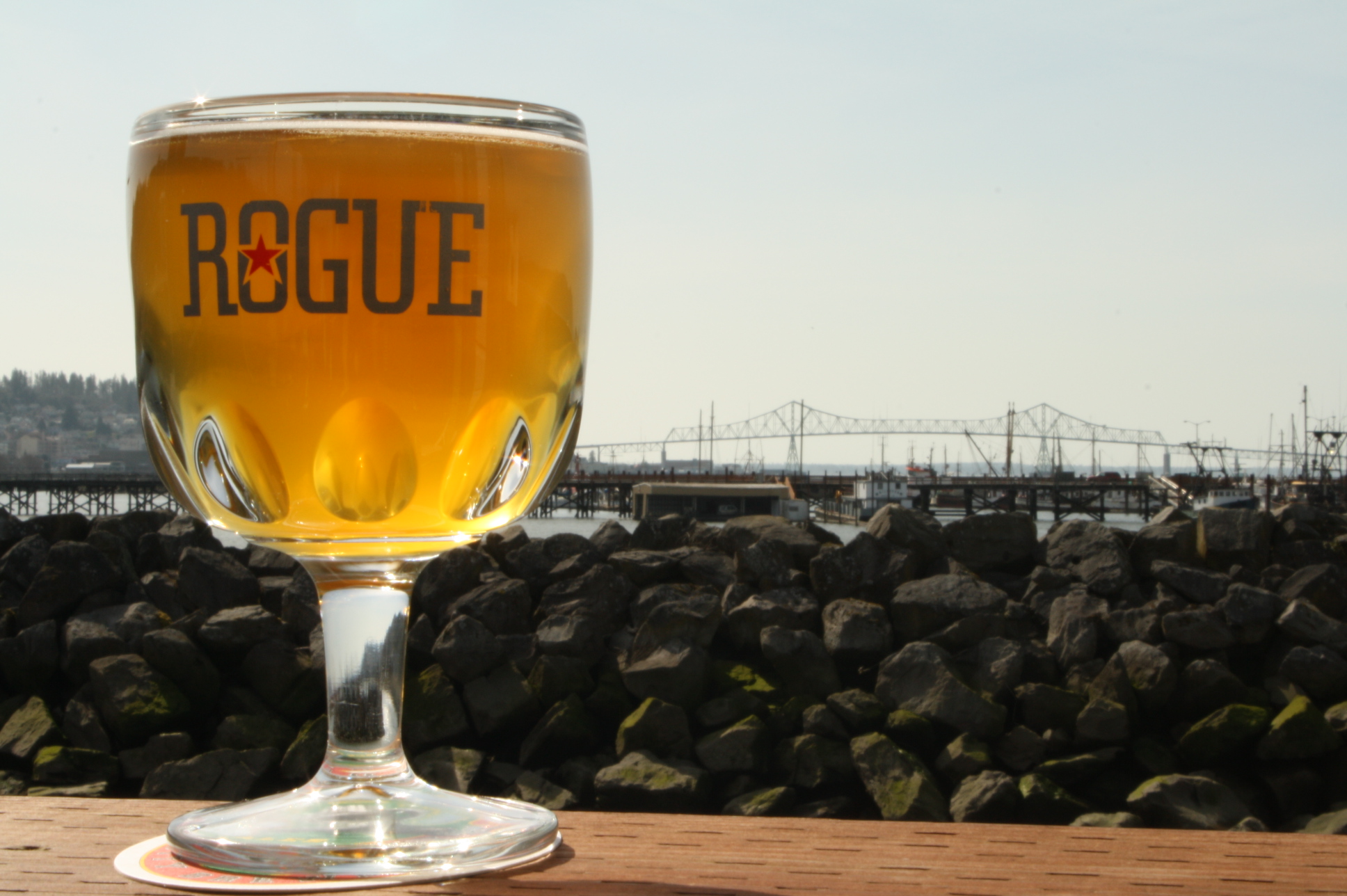 On Rogue’s outdoor deck, we basked in the revelry of great beer and great weather and reminisced on our short stay in this magnificent little city by the sea. The dogs barked in the distance with the delineative great bridge behind us and a hoppy treat at hand. Then, on to the Highway 30 and home to Portland.