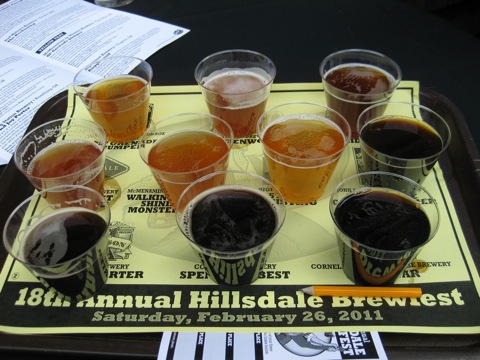 It might be hard for Beervana to follow up a weekend like Zwickelmania, but it does its best in the form of beer summits, competitions, and festivals as good as any city possibly could. To kick off the weekend, Roscoe’s on SE Stark and 81st Avenue held their monthly beer summit.  This month’s theme was Stouts. They really lived up to this one as you could find 12 stouts in house that would satisfy the biggest critic or the individual who was just in the mood due to our Nor’easter type weather (below freezing all day, etc.)  Some very interesting and unique stouts were on hand, including ones that some of you might be familiar with like Caldera’s Old Growth Imperial or Nectar Ales (Firestone Walker) Xantus, along with the harder to find types like Ninkasi’s Vanilla Oatis and Boneyard’s Sug Knight.  With so many choices and styles within a style it was hard to zone in on a favorite but the one that stood out seemed to be Oakshire’s Heart Shaped Box.  With the subtle cherry notes and milk chocolate flavor, it what was one of those stouts that seemed to ‘sooth the soul’ and was right up there in uniqueness with Upright’s Coffee Stout and Deschutes’ Murder by Mashtun.  This particular beer summit might well be dubbed Summit of the Year but hard to say since we still have ten more to go and I’m sure Roscoe’s wont disappoint with any of those. Not sure what is coming up next month but this monthly held event is becoming a can’t miss. 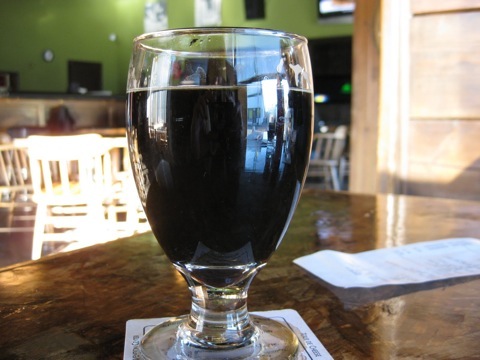 Moving into the meat of the weekend one of the big events held was the McMenamins Hillsdale Brewfest, 18th annual mind you.  This event comes down to a fierce competition between McMenamins as a ‘Battle for the Belt.’ What status does one gain 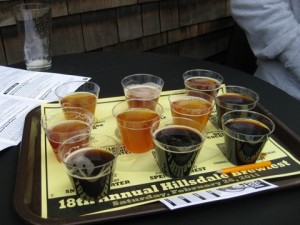 by winning the belt you ask?  Well only bragging rights for a full year and the right to serve your tasty brew at the kind of important, kind of popular, kind a the largest and most attended Oregon Brewfest, held in Portland each July. This battle includes 20 brewers with 20 different beers.  There is no shortage of unique beers, beers true to style and flat out wild beers with sought after ingredients.  So to go back and reiterated that there were 20 beers to taste it’s one of those brewfests so very few of us can keep up and taste all 20 and continue to differentiate at the end.  Luckily, they do a nice job of breaking it down into two trays notated by color.  This year’s trays were blue and yellow.  The yellow tray included a pepper beer, a black IPA, and two flavored porters.  The blue tray kept up with the yellow as it held two IPAs, a chocolate cream stout, and what seemed to be the dominate style of the day, a flavored porter.  This really showcases the talent in brewing within the McMenamins establishments.  As we moved inside to a table, you could feel the electricity and enthusiasm from the brewers in attendance along with locals, diehards and newbies to the festival. The Hillsdale establishment became filled to capacity by noon as some folks took up spots outside in the sub-freezing temps. The staff did a great job of keeping them warm though as they had ample heaters stationed at each table. All in all, it seemed to be a stiff, but friendly competition between the brewers with us the beer drinkers as the ultimate benefactors. At the time of this posting, the results are still not in, check in with the McMenamins Hillsdale website sometime soon to find out the winner. 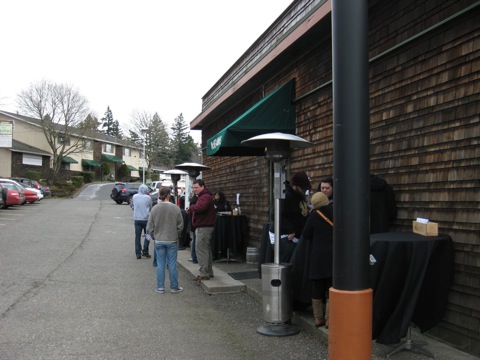 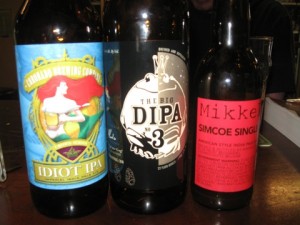 And what weekend would be complete without a Sunday afternoon stop at The BeerMongers on SE Division and 12th Avenue. This has become a favorite Brewpublic hangout and Sundays are a nice time to get down there. Not too busy, laid back atmosphere, great beer selection and maybe even some homemade treats make it a easy choice to have a pint. This can also be the best time to gain the ear of one of the Mongers or get involved in some good beer conversations with the other patrons. This past Sunday we tasted Coronado’s Idiot Imperial IPA, a San Diego beer that isn’t available for purchase here in Oregon. This was super bitter beer with plenty of hop punch coming in near 100 IBUs and 8.5% abv, definitely a good one to share. We also tasted the Mikkeller Simcoe Single Hop, the latest in their single hop series. The consensus was that it was a home run. Simcoe has become a favorite hop and this beer showcased the variety perfectly. This Danish brewery is cranking out some very special and impressive beers of late. 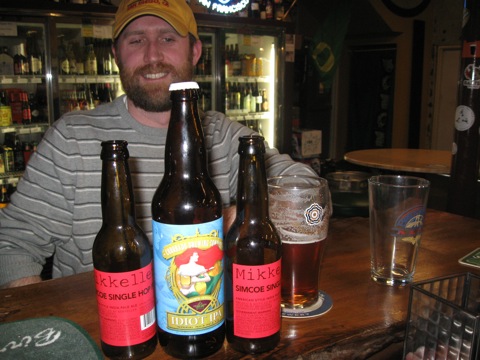 Well, the weekend has come and gone once again, but this doesn’t mean that Dan Culver won’t be hunting down more great craft brews throughout the week. Look for more features coming from Dan including updates from his Puget Sound Beer Adventure series.