Mmm… beer. Mmm… donuts were a couple of sayings made famous by the one and only Homer Simpson. Well his dream pairing has come true for the second consecutive year as Baker’s Dozen returns to Culmination Brewing on Saturday, March 12. Baker’s Dozen combines three elements of what Portland is known best for; beer, coffee and doughnuts. Our wonderful city has a plethora of breweries and coffee roasters so last year Brian Yaeger decided to launch a festival that features these two popular Portland exports along with the city’s growing doughnut scene. The pairing of these three items proved quite successful at last year’s inaugural Baker’s Dozen that capped off the 2015 Craft Brewers Conference that was held in Portland.

For the second year, festival founder Brian Yaeger has recruited breweries near and far to bring its coffee beer to be served alongside some of Portland’s best tasting doughnuts. Baker’s Dozen will take place during the brunch time hours of 10:00am to 3:00pm on Saturday, March 12. If you want to bring your little ones, Baker’s Dozen is an all ages event that will be featuring a Doughnut Decorating Station courtesy of Delicious Donuts with all proceeds benefiting Friends of the Children, a Portland organization that provides assistance to at-risk youth.

Baker’s Dozen is limited to 400 tickets. There are only so many doughnuts that can be scoured up on a Saturday. With over 75% of the tickets already sold do not delay and order your tickets now online at $24 each by clicking here. If there are any tickets still available the day of the event the price will be $27 at the door.

Admission to Baker’s Dozen includes a special Baker’s Dozen Passport that will allow patrons to sample 4 ounces of each of the 13 unique coffee-infused beers and every scrumptious doughnut morsel. And to save as much room so everyone can sample all of the offerings, most doughnuts will be quartered. Beer by the glass will be available a la carte.

Though some doughnuts will pair better with certain beers this festival is not designed to have strict guidelines on these pairings. The festival encourages attendees to find their own favorite combinations.

Kagan purchases his coffee in small lots from Royal Coffee, a coffee importer from California. He recently roasted beans from Santa Elena, Honduras and he used this roast in a coffee beer he collaborated on with Jason Webb of Portland U-Brew & Pub and local beer legend John Lovegrove. Badbeard’s Coffee Milk Stout is based on Lovegrove’s milk stout recipe that he has been homebrewing for the past eight years. This is a recipe that he based on Left Hand Brewing Milk Stout.

For fans of Modern Times Beer from San Diego, California, the festival will be pouring this out of market brewery’s Black House. This coffee stout is based on a an oatmeal stout that uses its own in house roasted coffee. Modern Times is the second brewery, behind Oregon’s own McMenamins, to roast its own coffee beans that end up in its beer. Last seen here in Portland during last summer’s Vegan Beer & Food Fest, Modern Times will have a few of its other offerings temporarily hitting the Portland market after Baker’s Dozen takes place on Saturday via General Distributing. Plus Modern Times Coffee will be selling its coffee beans during Baker’s Dozen on Saturday.

Here’s a complete list of breweries and the coffee roaster that each paired up with for Baker’s Dozen.

Below is the amazing list of doughnuts that will be available during Baker’s Dozen.

*Collaboration beers–that is, beers made by two or more brewers–aren’t new. But we believe this is the world’s first Collaboration Doughnut. With ideas coming from Penny from Delicious, Marissa from Coco, Victor from Tonalli’s, Dieter from Donut Byte Labs, and the actual baker himself, Steve from Staccato Gelato, behold the old-fashioned buttermilk doughnut made with Culmination Chocolate Stout, Ole Coffee espresso to make a Vietnamese coffee glaze, then topped with candied bacon bits.

If doughnuts are not your thing, Culmination Brewing’s chef, Carter B. Owen will be cooking up a few breakfast sandwiches. One that we have been told about is a sandwich made with maple ginger pork sausage topped with a fried egg and pimento cheese. It’s going to be best to come hungry to Baker’s Dozen. 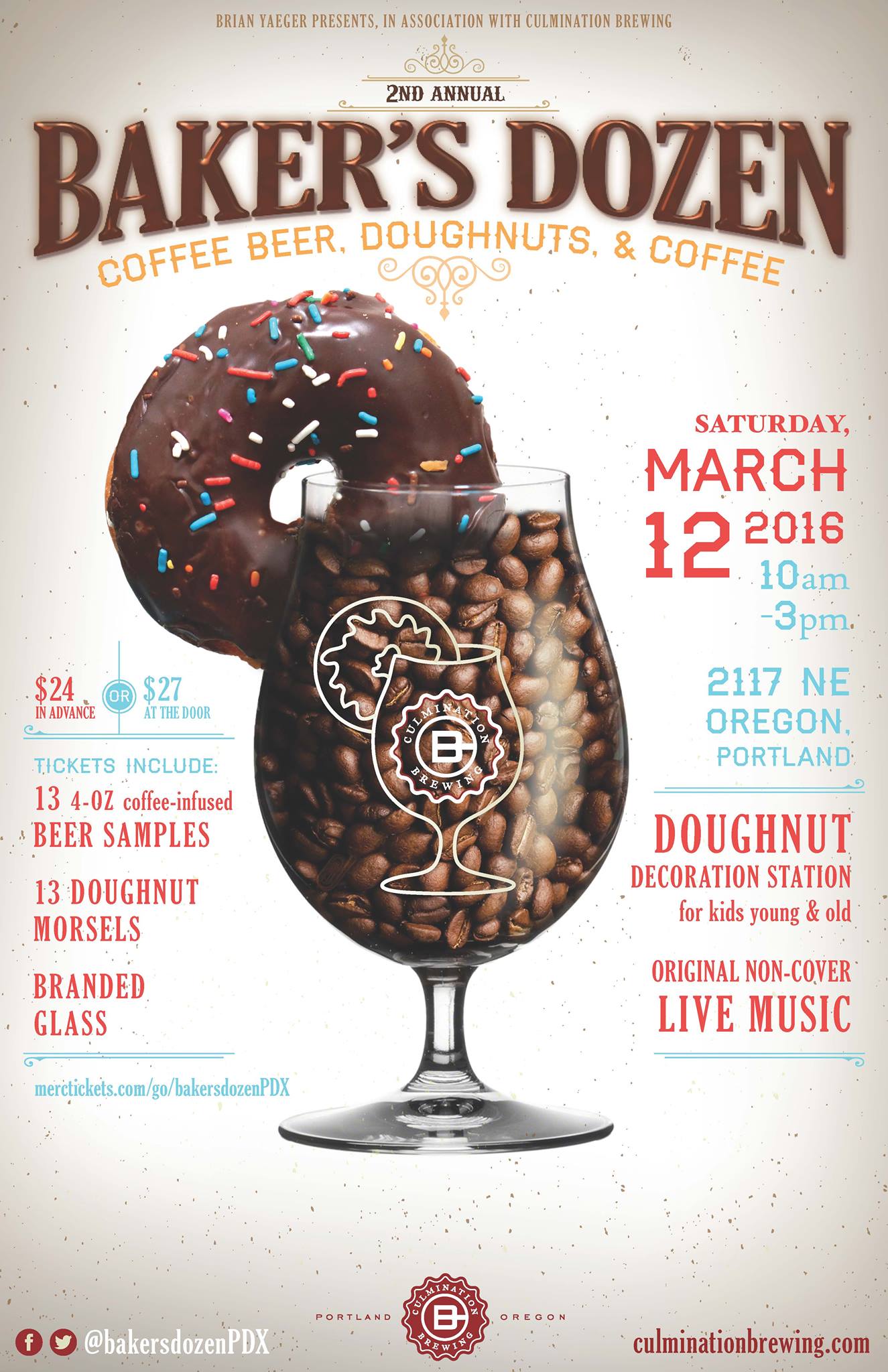