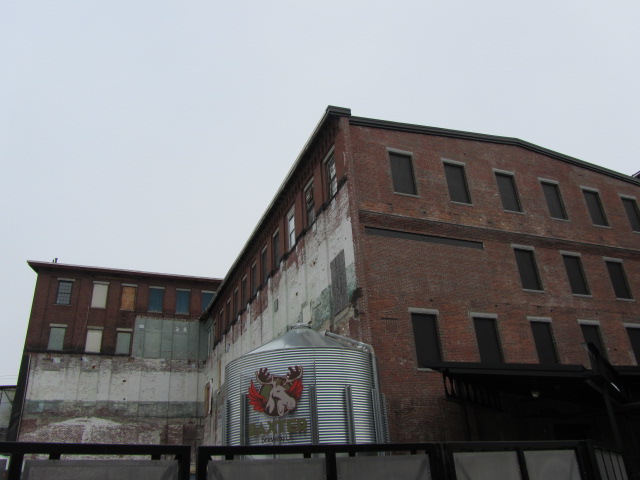 Lewiston, Maine has not been a destination for tourists in the Pine Tree State for quite some time. In fact, the Lewiston-Auburn (known locally as L-A) region, the hub of Androscoggin County and with a population about the same as the state’s largest city Portland (about 65,000 people), has endured a shaky reputation since the closure of many once thriving textile factories in the mid-20th Century.

Once at the forefront of textile production making goods such as Union Civil War uniforms and shoes, today the combined L-A metro is making strides in revamping what many Gen X’ers and even Baby Boomers have come to know as a deprived and especially  poverty-stricken region.  Basically known as a sector of Maine that you’d be better off avoiding not just for unsightly boarded-up buildings but for many of the despairing indications of exigency like crime and related malfeasance, Lewiston is pushing forth to extricate itself from the shadows of its polluted past. The post World War I decline witnessed many New England towns falling victim to a dearth of development and the region was sadly another example. However, in the period following the 1980s, the area has begun a cultural renaissance of sorts. In 1992 the city of Lewiston purchased the abandoned 5-acre (1.1 million square feet) Bates Mill after back taxes went far unpaid. 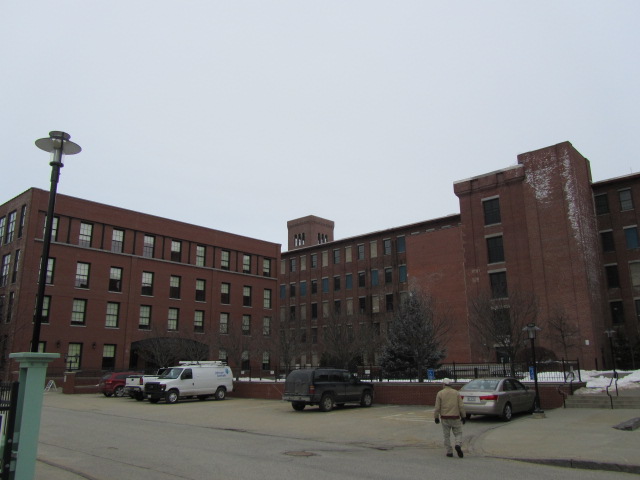 In 2001 the city sold three mill buildings to local developers. Platz Associates, then in 2003, sold the Bates Mill Complex and for the next four years, a number of business enterprises flourished after Platz redeveloped the mill building.

In May 2004 the city of Lewiston announced a plan for urban renewal near its downtown area. The plan has been on track to continually demolish several blocks of 19th-century laborer mill housing, pave new roads with updated infrastructure, to construct more owner-occupied, lower-density housing, and has built a boulevard through one neighborhood using federal Community Development Block Grant funds provided over a period of ten years. 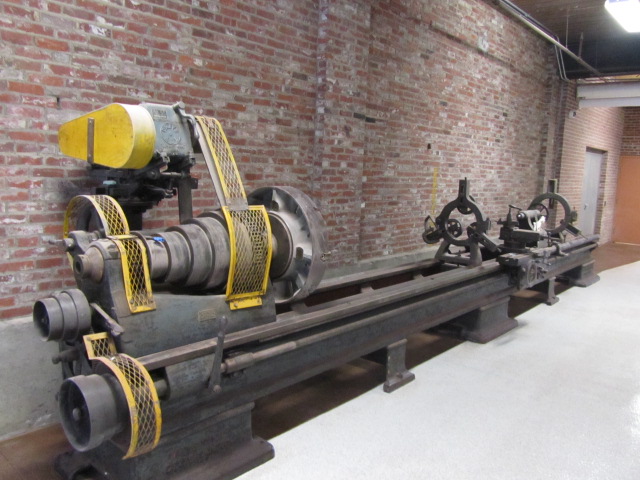 Though many residents of the affected neighborhoods felt that the plan was announced without much of their input, it would appear that, at least in the long term, the effort would revitalize this maltreated brick-laden community.

A neighborhood group called “The Visible Community”, was formed and has been actively involved in the planning process, which has resulted in a cooperation between neighbors and city officials to build community centers, basketball courts, and to provide feedback regarding the creation of the largest all-concrete skate park in Maine.

For enthusiasts of craft beer, Lewiston has recently emerged as a force thanks greatly to Baxter Brewing, which in 2010 occupied a portion of the old Bates Mill Building that laid unoccupied for some fifty years. The brewery was spearheaded by founder and maine native Luke Livingston who attested “The state of Maine is aching for full-flavored, American-style ales and the environmentally-friendly, beer-friendly and highly portable can.” The company’s President and CEO added “We are here to combine the two and reward the thirsty residents of Maine with the beer they want in the packaging they need.” 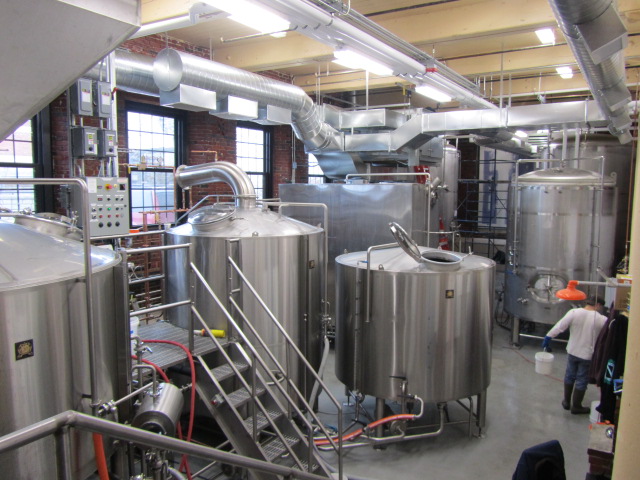 Since Livingston and Baxter’s announcement of revamping the space in April of 2010, much work and money has been poured into the brewhouse. Now, these efforts are coming to fruition thanks to a 30-barrel brewhouse manufactured by Newlands Systems Inc of Abbotsford, B.C., Canada and a state-of-the-art canning line – capable of filling thirty cans a minute – from Cask Brewing Systems of Calgary, Alberta, CA. The 30-barrel system was obtained in late 2010 from Ninkasi Brewing of Eugene, Oregon, who needed to accommodate their own unprecedented growth. The installation of a full-scale canning production system makes Baxter the first New England brewery to move to cans as a means of packaging their craft beer. 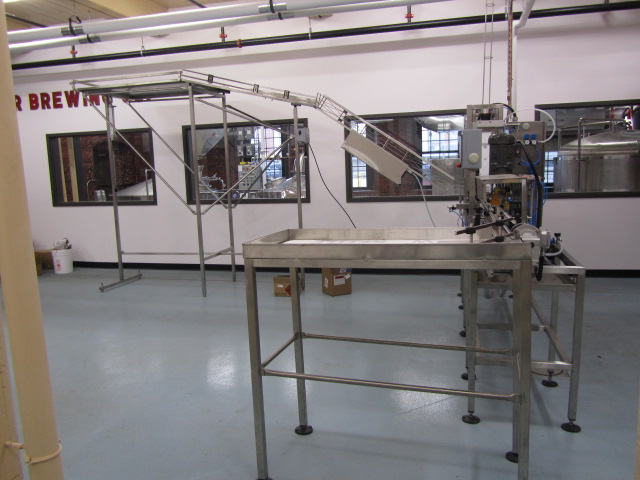 Just after New Years, we paid a visit to Baxter just in time to be some of the first to sample their first batch of beers slated for kegs and cans on January 21, 2011. We first met with Baxter’s Director of Brewing Operations Michael LaCharite while he was in Oregon to turn out some test batches of beer at Ninkasi before the brew system was dissembled and trucked east to Lewiston. The former Casco Bay brewer and co-founder (Casco Bay Brewing was founded by LaCharite and Bob Wade in 1994 before being obtained by Shipyard Brewing in 2008) was evidently enthusiastic about the undertaking and gave us an open invite to witness its potential first hand when returning to Maine. 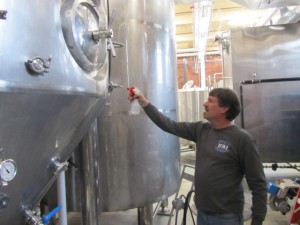 At Baxter we were quickly impressed by the amount of work put forth by the Baxter team to convert an abject space into a brick-walled handsomely spotless production facility replete with a welcoming front end gift shop and tasting room. From the brite tanks LaCharite sampled us on a young first batch of Pamola Xtra Pale Ale. An accurate commercial description: “Subtle, sophisticated flavors from choice barley and select hops combined with cold conditioning give this beer its exceptional drinkability.” Named for the mythical Abemaki legendary bird spirit causing cold weather, Pamola is from the Penobscot Indian peoples of Maine, to be found around Maine’s tallest peak Mount Katahdin. It was believed Pamola inhabited the mountain in present day Baxter State Park, and was said to be the god of Thunder and protector of the mountain. Described as having the head of a moose, the body of a man and the wings and feet of an eagle, this icon is used as the main branding for Baxter Brewing. A history indicates that Pamola was both feared and respected by the Indians, and his presence was one of the main reasons that climbing the mountain was considered taboo.

LaCharite described the Pamola Xtra Pale as a beer “you can drink a lot of in the summertime and throughout the year.” Cold conditioned in horizontal lagering tanks, Pamola (4.9% ABV, 26 IBU)which has been in the tank since December 21, 2010,offers a substantial hops character (five different premium malts including 2-Row grown in Aroostook County) that is balanced out nicely by the use of quenching pale malts (four different kinds, two from a small Willamette Valley, Oregon grower). “It worked out well that we got tanks in for Christmas and our first batch in for the winter solstice” said the brewmaster. “We didn’t exactly plan for it to happen on this date but we’re quite pleased that it did.” 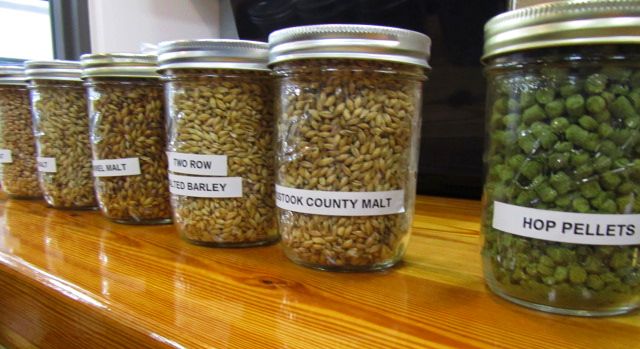 After inspecting the early incarnation of the Xtra Pale, LaCharite continued us on a thorough tour of the rest of the brewery, including the fully assembled canning line and grist room. Some additional space is available when and if further expansion is needed he said. Then, we were led back to the gift shop and tasting room where Baxter’s amicable tour guide and operations and retail manager Steff Deschene joined us while pulling off some tastes of their IPA. 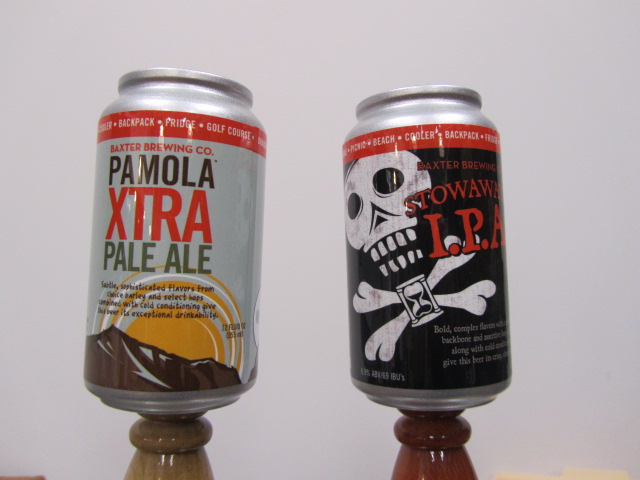 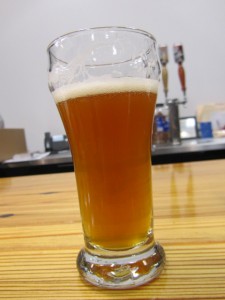 The Stowaway IPA makes use of five different premium malts including one from Aroostook County, Maine. Also, six different hops (the exact varietals are top secret), two from a small Willamette Valley, Oregon grower add an in your face West Coast attitude unlike most New England hoppy brews can offer. Along with aggressive dry hopping during the conditioning phase, the 6.9% ABV, 69 IBU Stowaway delivers one of it’s finest attributes through pure, soft water from nearby Lake Auburn. According to the brewer the PH is slightly adjusted, chlorine is removed and a bit of gypsum is added.  LaCharite said “I wanted to create the most complex hoppy flavor in this beer. That’s the purpose…” 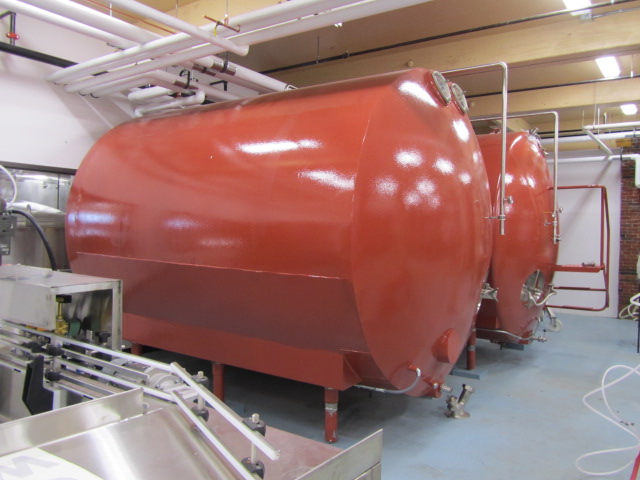 The area’s reception for Baxter’s undertaking, LaCharite said, could not have been better. “We’ve gotten great media attention. It’s really crazy to see this finally coming together,” he said. “We’re going to be pretty busy but I believe that having a great product in a can will absolutely set us apart.” 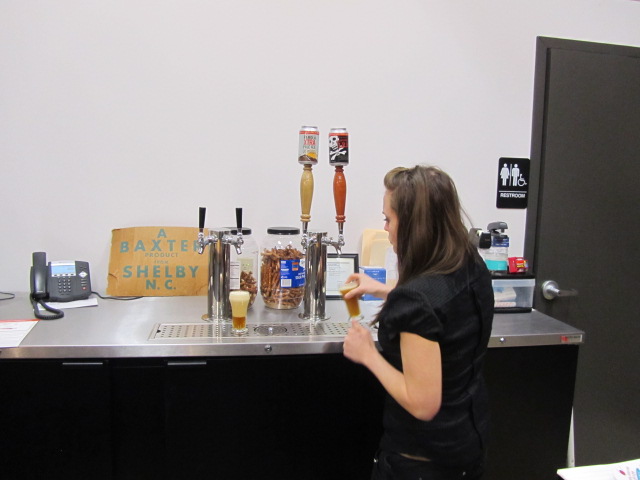 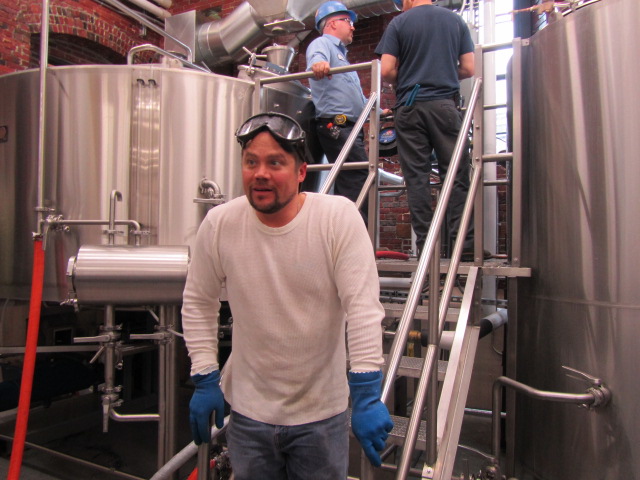 So why, like many other breweries across the county, did Baxter opt to can their beers? “There’s three things that give beer in a can an advantage (to bottled beer),” LaCharite said “It’s best for beer in that it offers lower dissolved oxygen levels. It’s more environmentally sound, and when you consider lower shipping costs, recyclability, and portability, it’s really a no-brainer.” When we jokingly asked him if being able to shotgun beer from a can was a part of the equation, LaCharite laughed, saying that the first person through the door mentioned the same thing. “Our beer is meant to be enjoyed, savored, so, we don’t really endorse that one.” 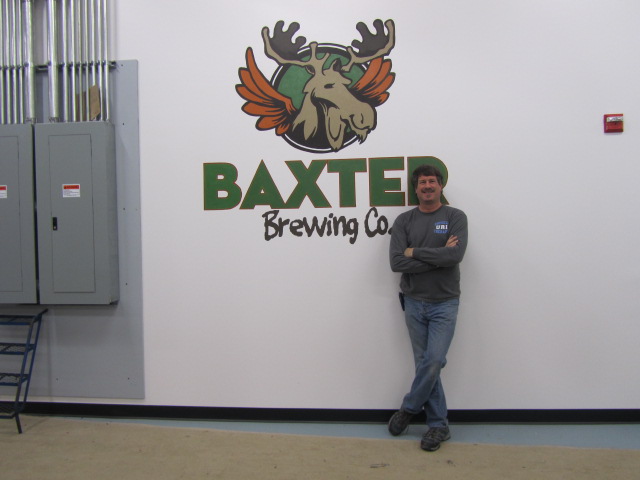 As far as other beer styles to find their way down Baxter’s pipeline, LaCharite said that they will initially focus on producing their first two brands but hope to play around with some other styles as time and capacity allows.

Baxter’s first batches will be kegged and canned on January 21, 2011 and available throughout the Pine Tree State. In 2011-2012 the company plans to have distribution to Massachusetts, New Hampshire, and Vermont. For more information on Baxter Brewing, visit their website at www.baxterbrewing.com.