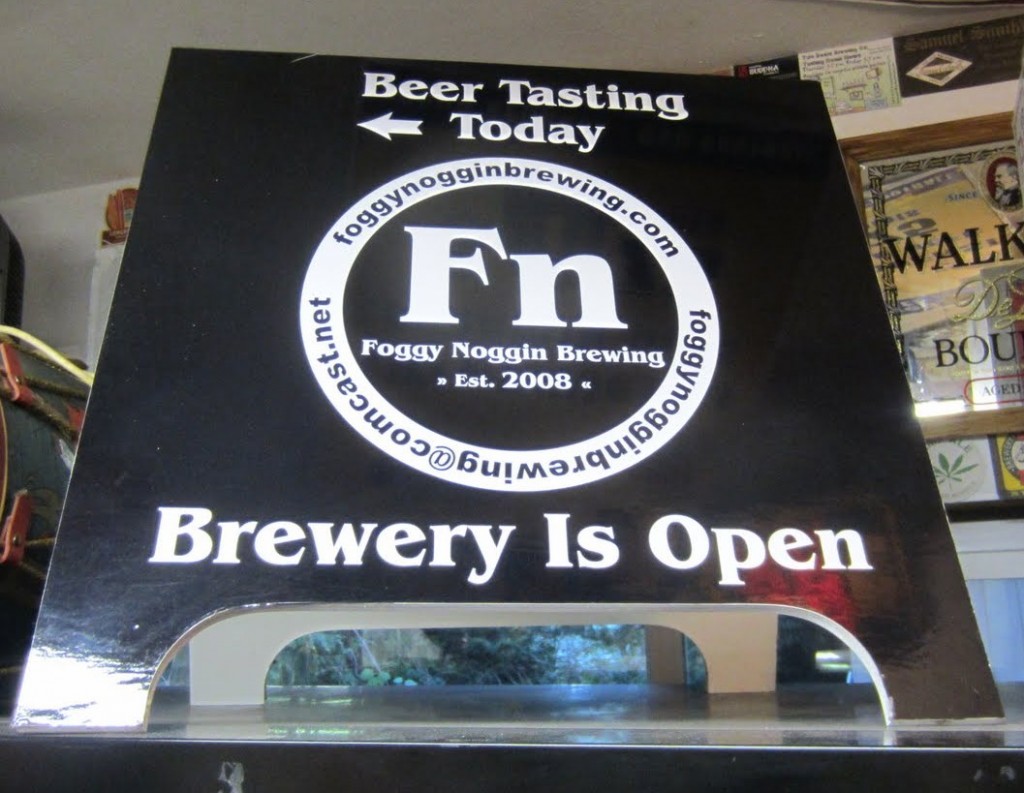 Welcome back to another edition of Puget Sound Beer Adventures.  “I want my Fn beer!”  That’s what you’ll hear when someone wants a beer from Foggy Noggin Brewing of Bothell, WA.  Nestled in a forested residential neighborhood for the past three years, this brewery is the definition of “nano.” 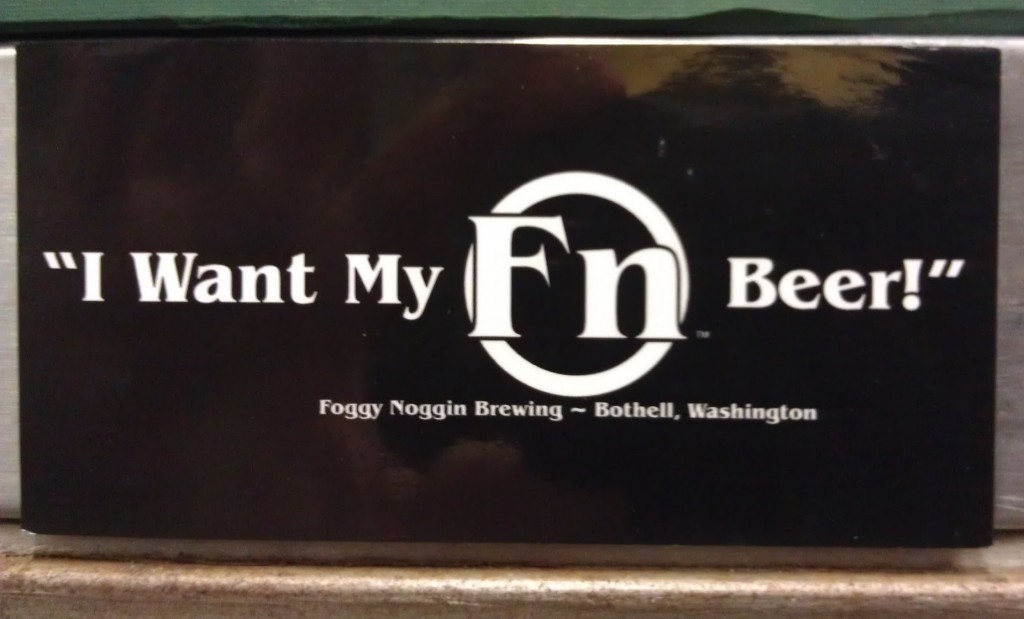 I arrived on a Friday evening, and my gracious host, brewmaster, owner, & operator Jim Jamison welcomed me for a visit during  typically closed hours.  Due to being a small operation and the proximity of neighbors, their hours open to the public are limited to Saturday afternoons.  I stepped inside the taproom, a converted  2-car garage, that now holds a nice serving bar, tables, fridges, and beverage coolers with growlers full of Foggy Noggin brew ready to go.  On Saturday afternoons the tap room is typically filled to capacity with a line out into the drive way of customers having pints or getting growlers. 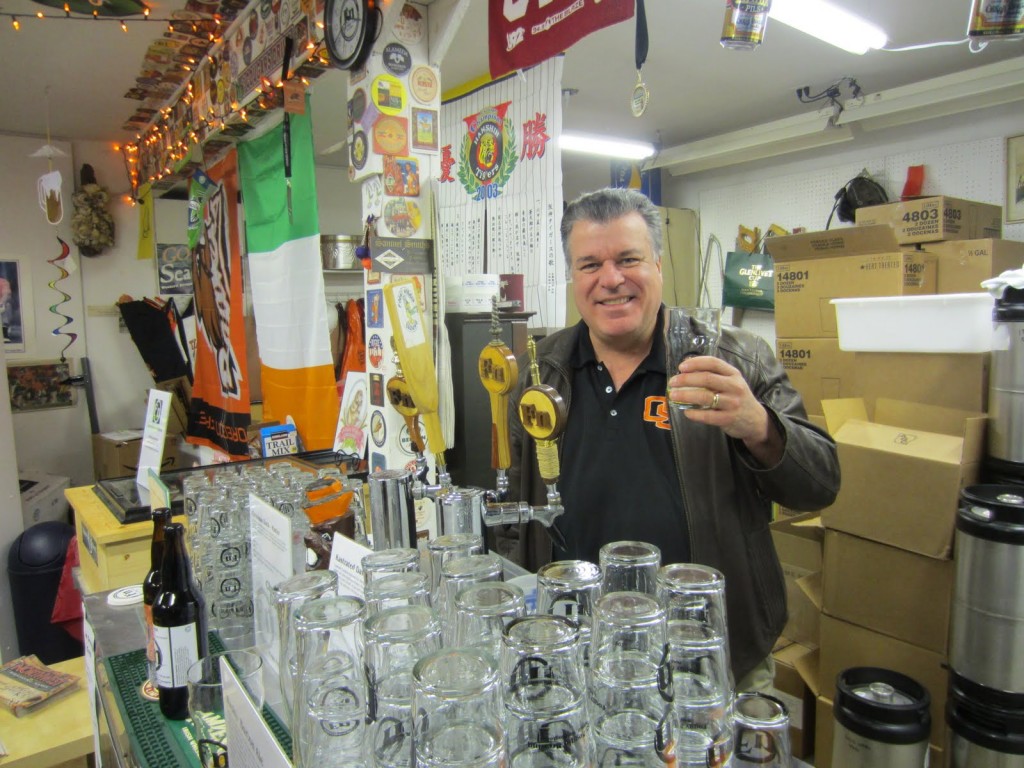 It was nice to have Jim’s undivided attention but at the same time I would have liked to have been there on a Saturday to mingle and chat with some of the regulars.  Jim actually hails from the Portland area and attended Oregon State and Portland State and cut his teeth on craft beer from around the world at Produce Row Cafe in Portland.  Here is a little more info on Jim. 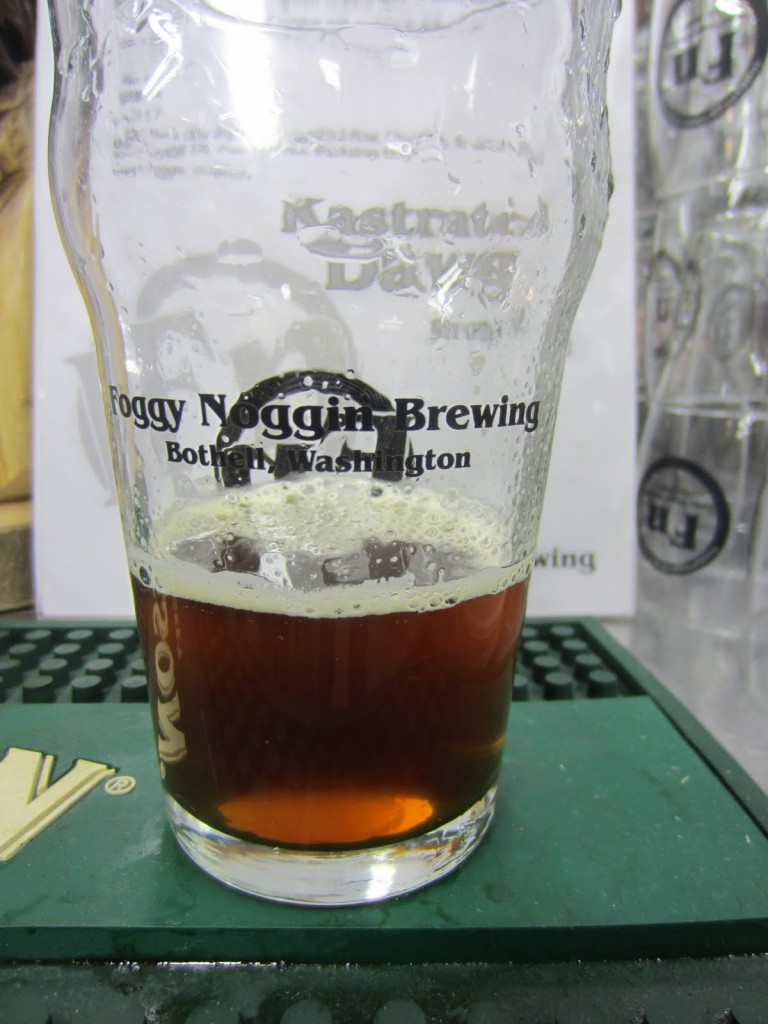 Jim wasted no time getting down to business, as he said it’s definitely easier to talk about the beer if we’re drinking it, and poured me my first sample of his British inspired brews.  We started with the Bit O’ Beaver, a sessionable English bitter.  It’s a beer made for those afternoons of multiple college football games where you like to be having a good tasting beer but would like to have more than just one per game.

The second one we tasted was a Burton style ale named Wasky, a relatively new brew for Foggy Noggin.  This was by far my favorite, it had the components of a good English IPA along with some unique roasty-sweetness from black-strap molasses.  With those flavors working together, along with a great mouth-feel and being on the high end of the IBU scale, this was one I definitely would like to have again.  The good news is that it will be for sale in bottles very soon. 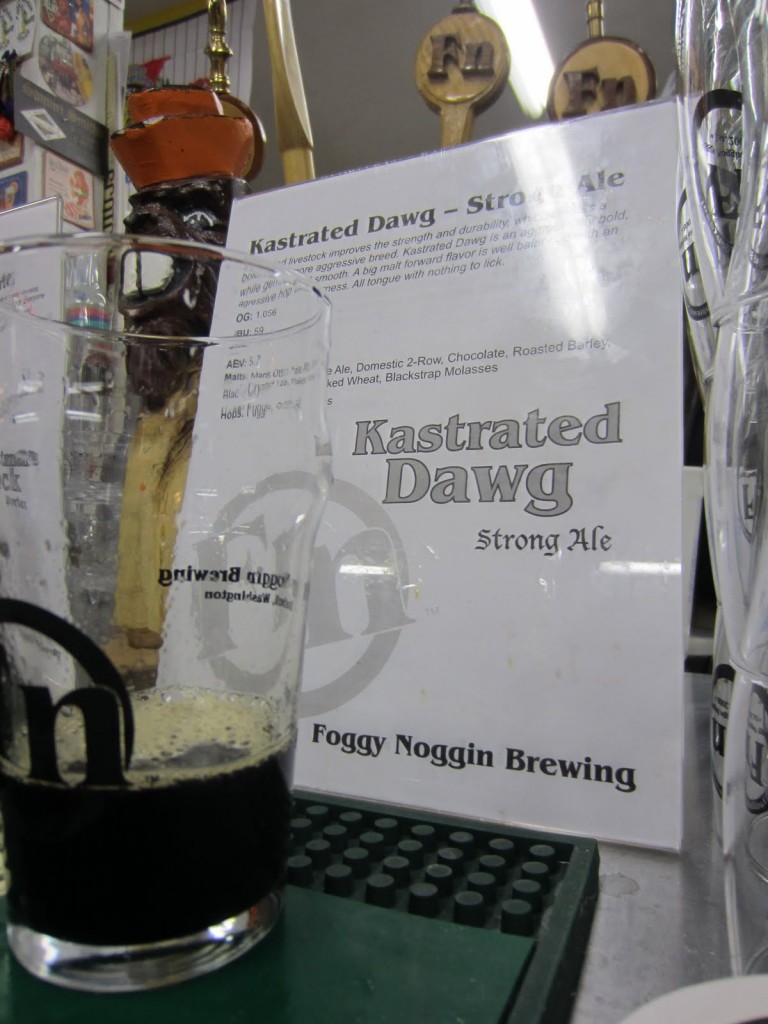 We then moved on to another constant in the Foggy Noggin lineup, Christmas Duck Porter.  It’s a very flavorful and drinkable porter and one of their more popular beers.  Next up was the strong ale named Kastrated Dawg (K’ Dawg to me).  If you know me at all you know I am a Huskies fan so this was one I had to call Jim on.  Of course him being a Beaver this makes sense, if you haven’t noticed he likes to have some fun with naming of his beers.  He said he has friends that are Huskies and come by and disapprove of the name but then they have a drink of the beer, and say “…Oh but it’s so good.”  So I guess they, along with myself let the name slide since the beer is so tasty.

We finished up with the XX Duck, (Double Duck) a straight up double (or imperial) version of the regular Christmas Duck porter.  This one had a kick to it and would be a nice one to savor on cold winter nights.

We then  progressed out through the back of the taproom with our beers in hand as he showed me the brew house. 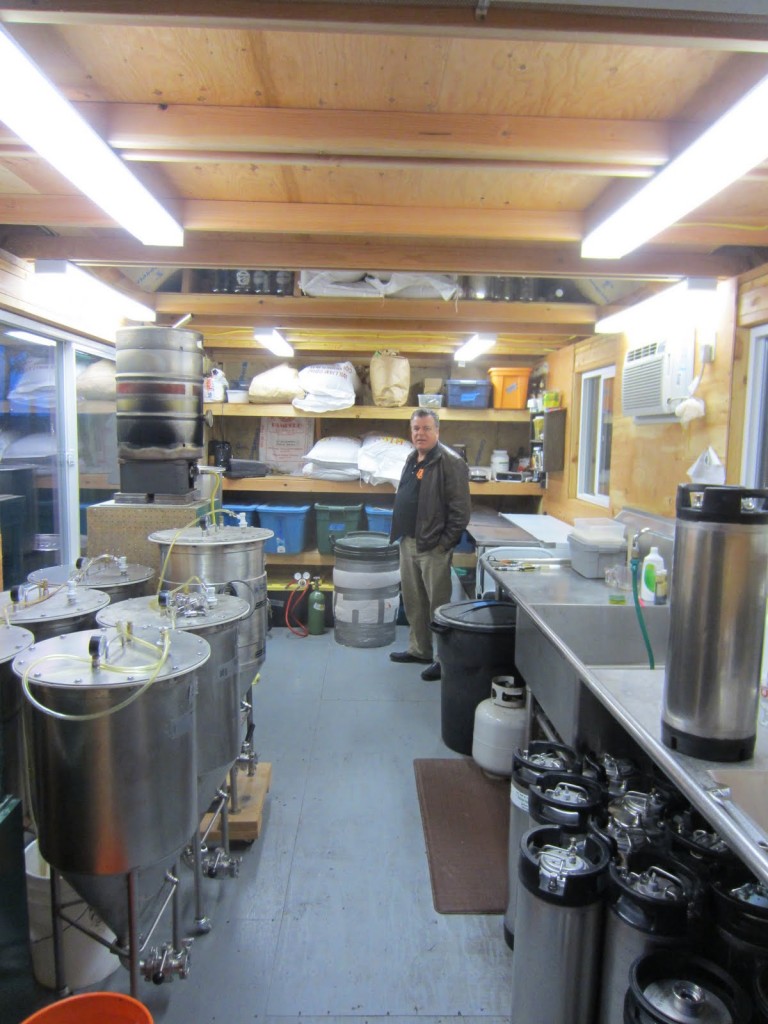 Which is exactly the best way to describe it, as a little detached house with a 1/2 bbl brew system.  It was cozy but with ample space for all the brewing tasks, and with what I though was a nice touch, some classical music playing relax the yeast while they perform their magic. 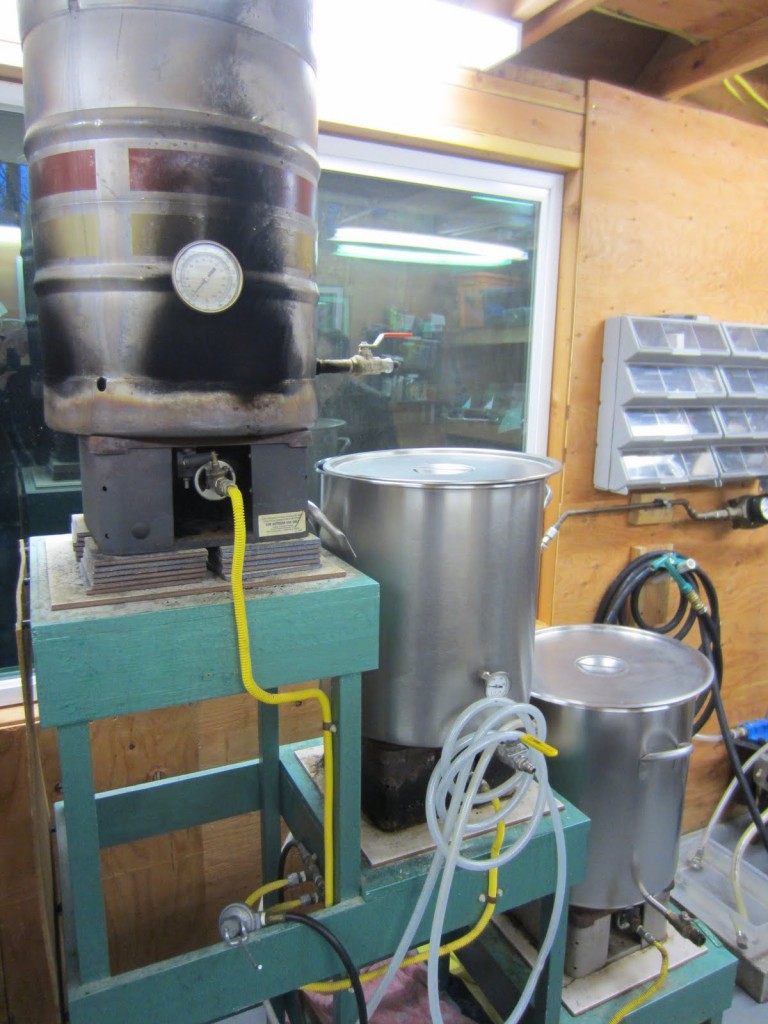 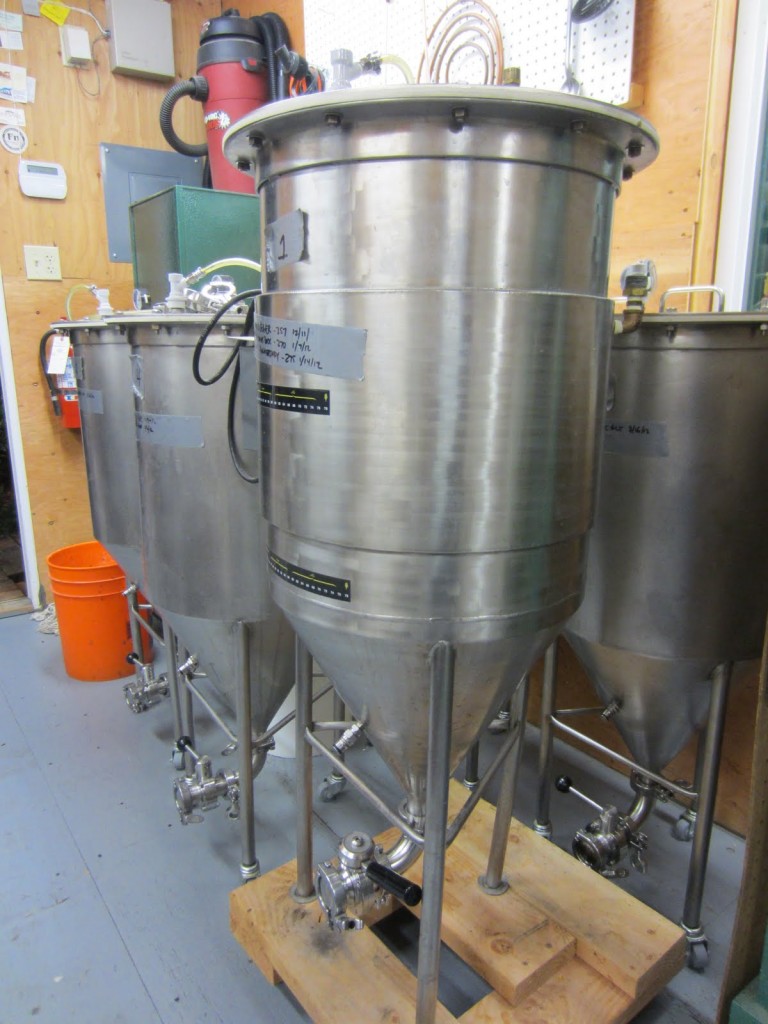 The brewery is a very nice set up with 7 fermenters from where  the beer is racked into sanke kegs for cold storage then (with a little help from CO2) into 1/6 bbl kegs for the draft handles.  He typically brews early Saturday mornings before they open up the taproom and then also on Sundays.

Back in the taproom Jim shared how happy he was to be doing this and how well things are going.  There could be some plans of expanding the size of the brewery and he has definitely been expanding the list of brews.  Foggy Noggin has produced many seasonal and special brews of late,  including and their Anniversary Ale, a full-flavored English old ale, and Olde Cruz, a wine barrel aged strong ale with the namesake of his late black lab Cruz.  Both were bottled and available at the brewery. 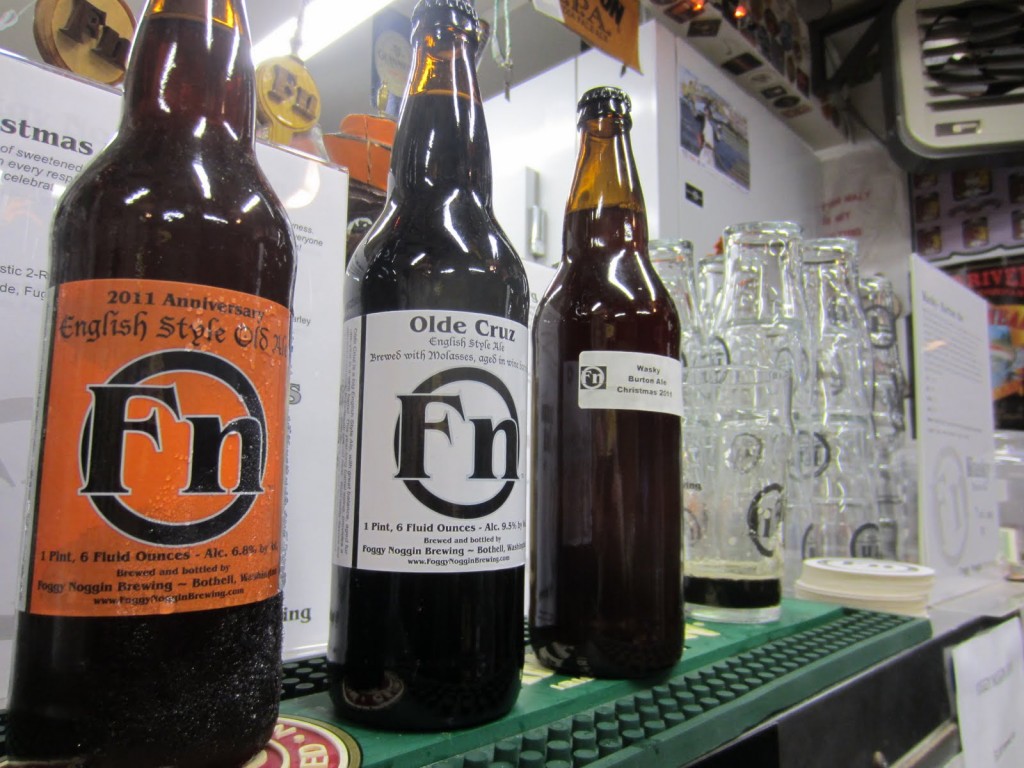 Jim sent me on my way with some beer gifts and a very enjoyable experience.  I look forward to returning and having a pint with him. 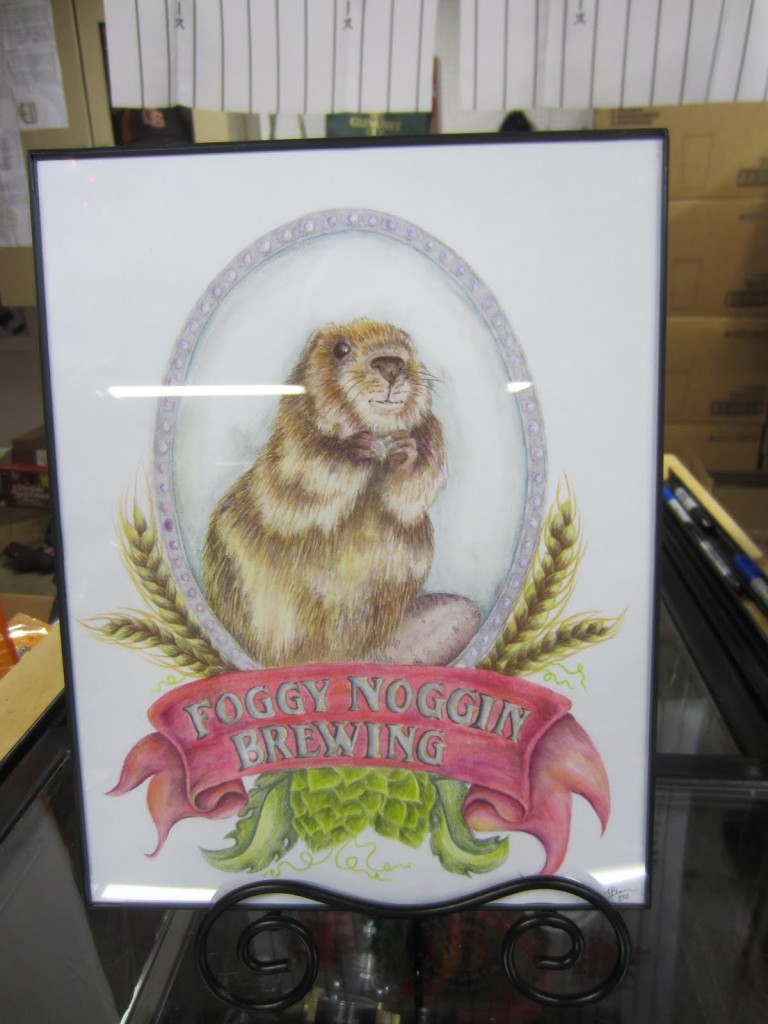