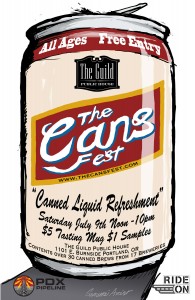 By now, especially if you are a craft beer lover, you have likely familiarized yourself with the various benefits of cans versus bottles when packaging. To celebrate the vast benedictions that canned craft beer offers, The Guild Public House is hosting The Cans Fest.

If you missed our previous post about the event. Here’s the details from The Guild’s founder Jesse Cornett with added finalized beer lineup:

The Guild Public House is pleased to announce The Cans Fest to be held during Oregon Craft Brew Month in partnership with Ride On Portland. The Cans Fest will be held at 1101 East Burnside in Portland and is scheduled July 9th from noon until 10 pm.  Admission is free and the event is open to all ages.  Tasting mugs are required to sample beer and will be on sale for $5 and tickets for 4 ounce tastes are $1.   The Cans Fest will feature beer from as far away as Colorado where Oskar Blues pioneered using cans for their product to local Oregon brewers, including Ft. George who just started selling beer in cans this spring.  We’ll have an array of brews that will satisfy the most novice beer drinker and impress the aficionados in the crowd.  We’ll be announcing the complete lineup soon, which will include beers not yet on the market.   The benefit of cans over bottles include better portability, being more environmentally friendly, keeping beer fresh longer, and getting cold much quicker than bottles.  More than 100 American craft brewers have recognized these benefits and more in choosing to can their product instead of bottling.   Unlike most Fests, if festival attendees like a particular beer they will be able to purchase that beer to go from The Guild as they leave the event.

Beers at The Cans Beer Fest

Back in Black IPA

Brewed like an American IPA but with the addition of rich, dark malts, this beer has all the flavor and hop character you expect with a smooth, mellow finish. ABV: 6.8% IBU:65

An imperial IPA aged in oak using Columbus, Centennial and cascades as the bittering hops and dry hopping with Simcoe, Ahtanum, Amarillo, and Cascades. ABV:9.7 % IBU: 94

Boont Amber Ale is an ode to balance, with a deep copper color offset by an off-white head.  The slightly sweet malty backbone is balanced perfectly with a subtle hop bite and aroma, and a wonderfully fruity yeast profile. ABV: 5.8% IBU: 15

This unique copper colored ale is smooth, malty, and lightly sweet, with a delicate hint of spice for that oh-so-drinkable, extra velvety flavor. ABV: 5.0% IBU: 4

Avery IPA demands to be poured into your favorite glass to truly appreciate the citrusy, floral bouquet and the rich, malty finish. ABV: 6.5% IBU: 69

A smooth, refreshing and well-balanced brew. Scape Goat is brewed with pale, crystal malts, and Kent Goldings and Crystal Hops.

Brewed with a unique, balanced blend of spices, Northwest Hops, and Montana honey. Light colored, light bodied, and very drinkable, Summer Honey sacrifices nothing to create a flavorful beer that can be enjoyed during the height of the summer.  ABV: 4.7% IBU: 15

Hazed and infused is “Hazed” in its natural unfiltered state, and “Infused” – dry-hopped with Crystal and Centennial hops – during fermentation for a big, bold, unique taste.

Hop, hops, and more hops! This ale has an intense aroma and a long lingering finish. A beer for the connoisseur, this is the Brewmasters choice.  ABV: 6.5%

Hand-crafted using Mariss Otter barley from England and hops from Washington’s Yakima valley. This big bold pale ale has a citrus aroma and a full malt body giving it a distinctive character. ABV: 5.0%

Generous additions of Simcoe, Amarillo and Cascade hops throughout the brewing, fermentation and conditioning phases, balanced with heaps of organic pale malt.

Pours with a light beige head on a dark amber beer. Aroma is of smooth malt along with a smoky background leading to a mouthful of deep, roasted malt flavor. Ends long and smooth with a sweet aftertaste. ABV: 5.4% – IBU: 25

Coconut Porter is a fresh handcrafted Robust Porter brewed with six varieties of malted barley, hops and hand-toasted coconut. This beer has a malty-toasted coconut aroma followed by a rich, silky feel with tastes of dark malt, chocolate and hints of coffee. Flavors of toasted coconut and hoppy spice help balance the sweet finish. ABV: 6.0% IBU:30

This India Pale Ale was brewed with Falconer’s Flight, which is a hop blend of several varieties of commercial and experimental hops commonly found in IPA style beers. The base is 2-row malted barley along with Crystal, Munich, and Dextrin malts. ABV: 6.8% IBU:68

Overall, a hazy wheat appearance with a pure white foam head and subdued lemon aroma.   Predominate Elderflower flavor with a slight lingering depth from the Grains of Paradise and a slight lemon presence. ABV: 6.2%

A hefty, dry hopped double-red ale with a nose full of aroma, a malty middle and unctuous hop flavors. G’Knight sports a surprisingly sensuous finish for a beer of its size. ABV: 8.7% IBU: 60

A hand canned beer that delivers a hoppy nose, assertive-but-balanced flavors of pale malts and hops from start to finish.

SanTan Hefeweizen is an unfiltered Bavarian wheat bear, effervescent and sweet, with an unmistakable banana-clove character. Often paired with a lemon or an orange.

A caramel overtone prevails with some tart fruit notes. The initial flavor is crisp, but then the sweet caramel tones prevail. A final swallow lends itself to balance with just a hint of chocolate in the finish. ABV: 5.7% IBU: 58

An India Pale Ale, the Euphoria is crafted with piles and piles of Golding hops to provide a unique spicy finish. ABV: 6.1% IBU: 61

A bright, crisp crystal wheat beer with a natural citrus flavor. Panorama Wheat is best served with a slice of lemon. ABV: 4.6% IBU: 12

This ale features a blend of whole licorice root and star anise to create an uncommon addition to that traditional export Porter’s hearty character. ABV: 7.8%

Golden State Ale blends the sweet bite of toasted poppy with the aromatics of an simple California yeast. It’s crisp and light, but carries enough body for the self-respecting beer drinker to think, “This is an uncommon ale.” ABV: 6.4%

It is a traditional Belgian-style Double seasoned with coriander and entirely uncommon Thai spices. At first surprising, the floral notes of lemongrass and sharper bite of kaffir lime blend with the deep malt of this double to produce a dangerously drinkable beer.