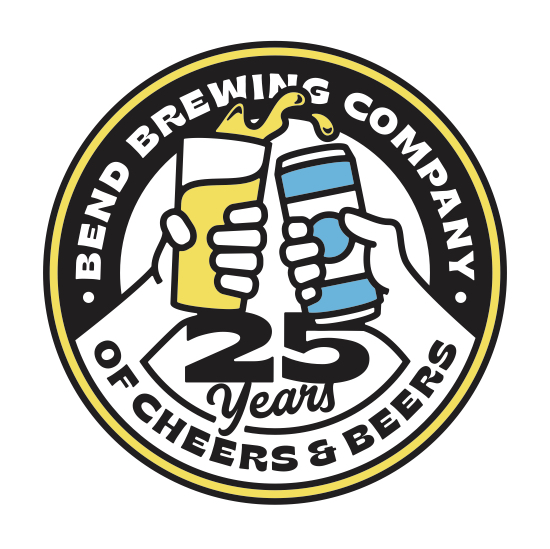 During this five-day celebration, Bend Brewing Co. (BBC) will donate 10% of beer and 25th Anniversary merchandise sales to local non-profit organizations. The week’s biggest celebration will take place on Friday October 23rd with the draft release of BBC 25 Alumn-IPA. This new IPA was brewed in collaboration with two former BBC brewers, Tonya Cornett and Ian Larkin, that now brew together at 10 Barrel Brewing.

To celebrate Bend Brewing Company’s 25-year anniversary we invited former BBC and current 10 Barrel Innovation Brewmasters Tonya Cornett and Ian Larkin back to brew a unique double IPA that bridges the gap between the past and the future. Made with 100% Mecca Grade malt from Madras, OR, BBC “25” blends old school hopping methods, like first wort hopping with Nugget hops, with new hop products and techniques like Eukanot Incognito in the whirlpool and a big Citra dry hop during fermentation for biotransformation. A final post fermentation dry hop with Simcoe provides classic pine notes that complement the newer tropical hop flavors.

Head Brewer Zach Beckwith says, “It was a real honor collaborating with Tonya and Ian on this beer. The spirit of this beer is what BBC is all about; respecting our last 25 years while focused on the next 25.”

While the ongoing Covid-19 pandemic scuttled the brewery’s plans for a large-scale celebration of this important milestone, it hopes to be able to hold one in the future when it is safe.

Bend Brewing Company opened in 1995 as Bend, Oregon’s 2nd brewery and over the last 25 years has won numerous awards at national and international beer competitions while building a reputation for quality and innovation. Bend Brewing Company beers are available in 16 oz cans and draft throughout Oregon and in parts of Colorado.