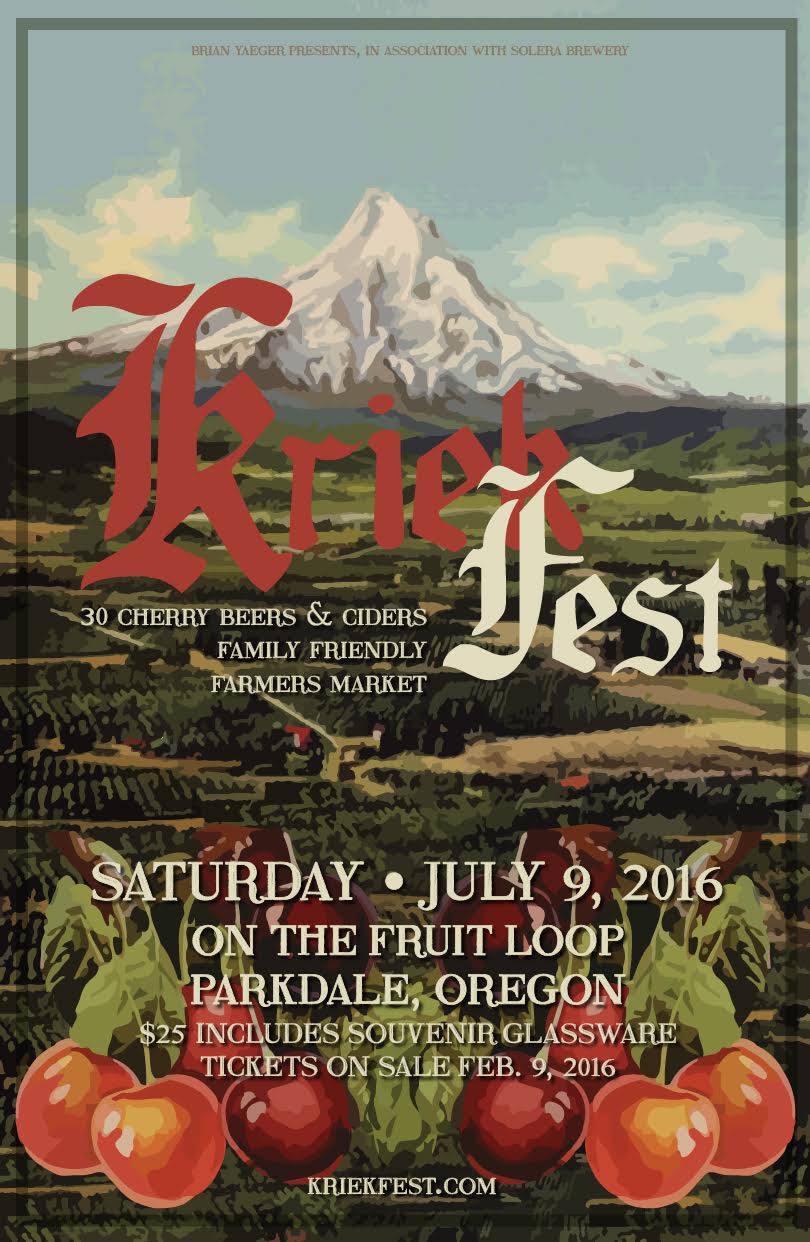 Here in Oregon we have copious amounts of beer festivals, probably many more than in any other area of the world. But what makes a beer festival truly unique and one that will be successful? How about holding the festival directly in the middle of where one of the beer’s prominent ingredients is grown.

Mark your calendars now, as we are only 365 days away from the inaugural Kriekfest. Surprisingly this highly lauded beer style has not had an event of this magnitude before. Kriekfest is a celebration of cherry beers, ciders, and baskets of the fruit itself held right in the heart of Oregon’s famous cherry orchards. The first ever Kriekfest will be held on Saturday, July 9, 2016 in Parkdale, Oregon, just south of Hood River.

The family-friendly festival will sure be one that will make the 1-1/2 hour drive from Portland to Solera Brewery worth one’s while. With the abundance of camping options in the area this is one that plan ahead for. Advance tickets will go on sale February 9, 2016 for this Oregon Craft Beer Month event.

Here are more details including the list of the amazing participating breweries from the festival’s press release that was sent to us yesterday.

PARKDALE, ORE – July 9, 2015 – As sour and wild ales grow in popularity, Lambic-style krieks are the showstoppers both among beer aficionados and those who proclaim, “I don’t usually like beer.” The inaugural Kriekfest will take place in one year—Saturday, July 9, 2016—in the small, rural town of Parkdale. Situated between Mt. Hood and the Columbia River Gorge that separates Oregon and Washington, Parkdale lies sixty miles east of Portland. Highway 35, which runs from the riverside town of Hood River, is nicknamed the Fruit Loop for its fertile farms including abundant cherry orchards. The festival’s setting next to host Solera Brewery offers striking views of iconic Mt. Hood and the surrounding orchards. The festival joins others around the state during July-long Oregon Craft Beer Month. Tickets go on sale February 9, 2016. The $25 cost includes five tickets and a commemorative glass with additional four-ounce sampling tickets available on site.

What is kriek? The word is Flemish for cherry and Kriek beers are a traditional style since at least the 17th century. They are spontaneously fermented lambic ales brewed in Belgium aged with local cherries (pits and all). World-class examples available at Kriekfest include Brasserie Cantillon and Brouwerij Drei Fonteinen. Today, beers soured with wild yeasts and bacteria are created the world over. Cherry-growing regions are natural birthplaces for such beers and ciders. Driving along the Fruit Loop passengers are treated to pastoral views of cherry trees protected against inclement weather by Mt. Hood. Combined with the fecund Willamette Valley, Oregon cherry farmers harvest over 13,000 acres of cherries and although seasonal harvests vary greatly, the overall value of production within the state has a five-year average of over $55,000,000.

The seed for Kriekfest was planted in 2013 when local beer author Brian Yaeger was talking to Solera brewmaster Jason Kahler at the rustic brewpub in Parkdale. Kahler mentioned that he had three different barrels of wild Kriek beers aging. Noting that two other nearby breweries make world-class Krieks—Logsdon Farmhouse Ales and Double Mountain Brewing—Yaeger suggested throwing a kriekfest behind the brewery. Solera co-owner John Hitt, who helps organize the annual SoLog festival, is instrumental in making Kriekfest not just a celebration of cherry-laced libations but a family-friendly event that supports farmers, culinary artists, and the whole hillside community.

Most participating breweries and cideries hail from Oregon. Several revered breweries from around the country and beyond will provide kegs. Some of the beers available will be highly limited annual releases while others pouring at the festival will debut at the event. Ticket sales will be limited to 500 while designated drivers and minors will be admitted free. Attendees coming from beyond the gorge are encouraged to camp at nearby campsites or find local lodging, found on the website Kriekfest.com

Breweries featured at the 2016 Kriekfest*:

Cideries featured at the 2016 Kriekfest*:

About the Organizer:
Brian Yaeger is the author of Oregon Breweries (December, 2014), a comprehensive guidebook for the state known as Beervana. He is a frequent contributor to national and local beer publications and contributor to the Oxford Companion to Beer. He lives in Portland where, along with his wife and son, he welcomes vacationing beer pilgrims Inn Beervana. Follow him on Twitter at @Yaeger

About Solera Brewery:
Solera Brewery is where brewmaster Jason Kahler has been creating excellent farmhouse ales, IPAs, and more including several wild cherry beers since 2012. It resides in an historical building that was built and operated as a movie theater from 1930 to the 1950s. Join owners John Hitt and Jason Kahler for a pint, delicious food and the most spectacular view of Mt Hood’s craggy North Face from the back patio. The brewpub is located at 4945 Baseline Rd. in Parkdale. Follow Solera on Twitter at @SoleraBrewery

About Kriekfest:
An all-cherry beer and cider festival was initially conceived in 2013 over a Solera beer. Awe-struck by the view of Mt. Hood’s glaciers looming over neighboring orchards, Yaeger suggested to Kahler that they their own festival of krieks. In 2015, Hitt, soon to present the 2nd annual SoLog Brewfest in collaboration with Logsdon Farmhouse Ales, tackled the festival’s logistics. Attendees are encouraged to camp in the valley for the weekend and explore the breweries, cideries, and farms along the Fruit Loop highway and throughout the Columbia River Gorge. Follow updates on Twitter at @Kriekfest