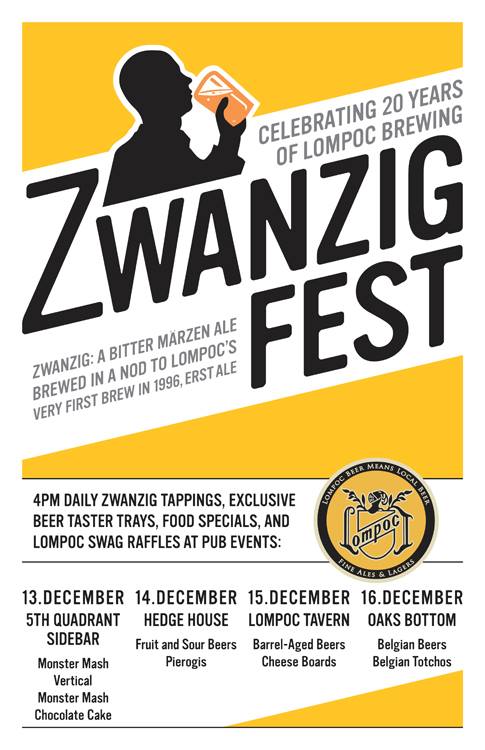 Twenty years ago in December 1996, Old Lompoc Brewery, as it was known at the time, began brewing its ales and lagers in Portland. A little over four years later in May 2000, Jerry Fechter, the brewmaster at Old Lompoc Brewery purchased the brewery with the assistance of legendary publican, Don Younger, and re-opened it as New Old Lompoc.

Then in 2006 Lompoc expanded its brewing operations to a more modern 7-barrel brewhouse at its Fifth Quadrant location as it changed its name to Lompoc Brewing. Five years later it expanded once again to a 15-barrel system in early 2011. Then when the original location of New Old Lompoc temporarily closed for one year during a building redevelopment, all brewing production moved to Fifth Quadrant.

Now twenty years later Lompoc Brewing is set to celebrate 20 years of brewing when it hosts its Zwanzig Fest. Taking the German name that means 20, Zwanzig, the four day festival will run from December 13 – 16, 2016 at its five Portland locations.

To celebrate its 20th anniversary, Lompoc Brewing did what other breweries do to celebrate; it brewed up a special anniversary beer. However, Lompoc took this one step further and created its own beer style to ring in 20 years. Brewed in homage to its first brewed beer, Erst Ale, Lompoc brewed Zwanzig Märzen Ale that will be tapped on December 13th.

Zwanzig is a beer that crosses boundaries and is described as a bitter Märzen ale. Yes, there is no such style as a Märzen ale, as a Märzen is always a lager. The brewery’s description on Zwanzig is that it’s pale orange in color, its full, malty body and eight hop additions will make you reminisce tipping back a few pints on the New Old Lompoc patio. (7.0% ABV).

Each day during Zwanzig Fest, Lompoc will tap Zwanzig at 4:00pm at a different Lompoc pub. Everyone that orders a Zwanzig or that day’s featured taster tray will receive a raffle ticket for a chance to win a variety of Lompoc swag. Owner Jerry Fechter and head brewer Bryan Keilty will be present at the events to share Lompoc’s history and talk about days past.

Stay up to date on the Zwanzig Fest happenings by following its Facebook Event Page. Also, make sure to use hashtag #LompocZwanzig in all of your social media tags!