Thirty-three years ago, at the humble Hillsdale Brewery & Public House in Southwest Portland, McMenamins signature beer was born as batch #37 and was called Hammerhead. This inspiring Northwest Pale Ale is well known and has inspired countless other beers since its inception back in 1986! 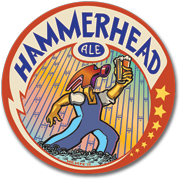 All day today, Friday, January 25th, McMenamins will celebrate the 33 year legacy of Hammerhead with a celebration at each and every McMenamins location in Oregon and Washington. Hammerhead specials includes $4.50 pints; $9 growler fills; and $2 cans to go. Plus, King Ludwig Returns, a Hammerhead brat on a pretzel roll overflowing with sauerkraut, cheese & ale sauce and bacon served with fries or tots.