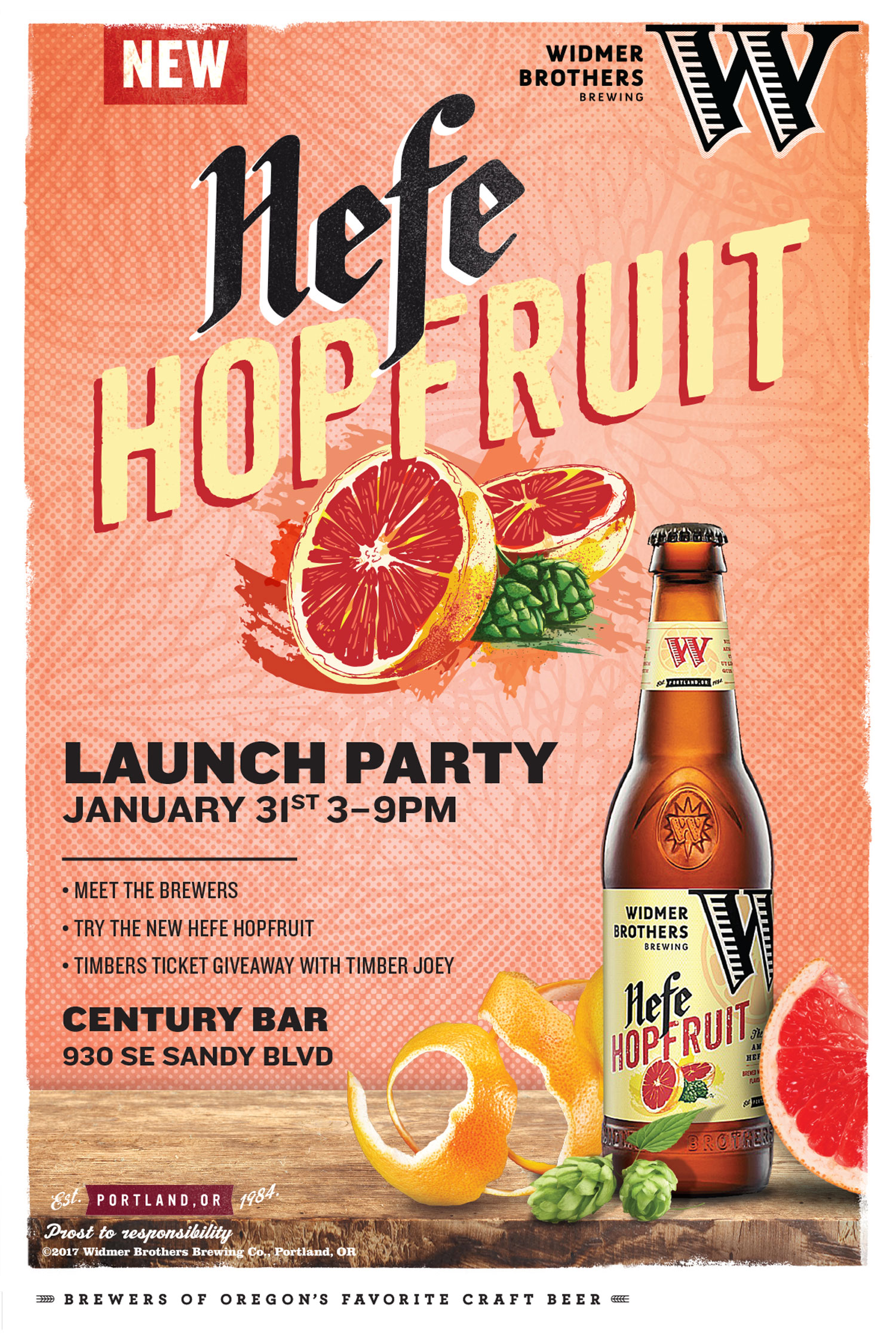 Expanding on the past two-year’s success with its Hefe Shandy, Widmer Brothers Brewing has announced three new releases in its trendy Shandy lineup. Available now through April is the new Hefe Hopfruit that will be followed by Hefe Berry Lime and then Hefe Blood Orange to end out the year.

“The goal of our new line of Hefe-inspired beers is to add interesting, complementary flavors to Hefe, while still staying true to the original,” stated Rob Widmer, co-founder of Widmer Brothers Brewing in a release. “We received great feedback on Hefe Shandy, which came out in 2015, and we wanted to continue to build on that with some new variations that are still wheat beers first and foremost, and not too sweet like some other fruit beers on the market.”

First out of the gate in its new Shandy lineup is Hefe Hopfruit that is described as a hoppy, citrusy twist on the Original American Hefeweizen, brewed with grapefruit peel and Citra and Chinook hops. At sessionable 4.9% ABV, this juicy, cloudy offering is a refreshing session beer for any occasion.

To kick off this new release, Widmer Brothers is hosting a launch party for Hefe Hopfruit on Tuesday, January 31, 2017, at Century Bar on SE Sandy in Portland from 3:00 – 9:00pm. Since Widmer Brothers Hefe is the Official Craft Beer of the Portland Timbers, Timber Joey and former player and current Timbers Director of Business Development Jack Jewsbury will be in attendance. Look for Widmer Brothers’ specials throughout the night on Tuesday. 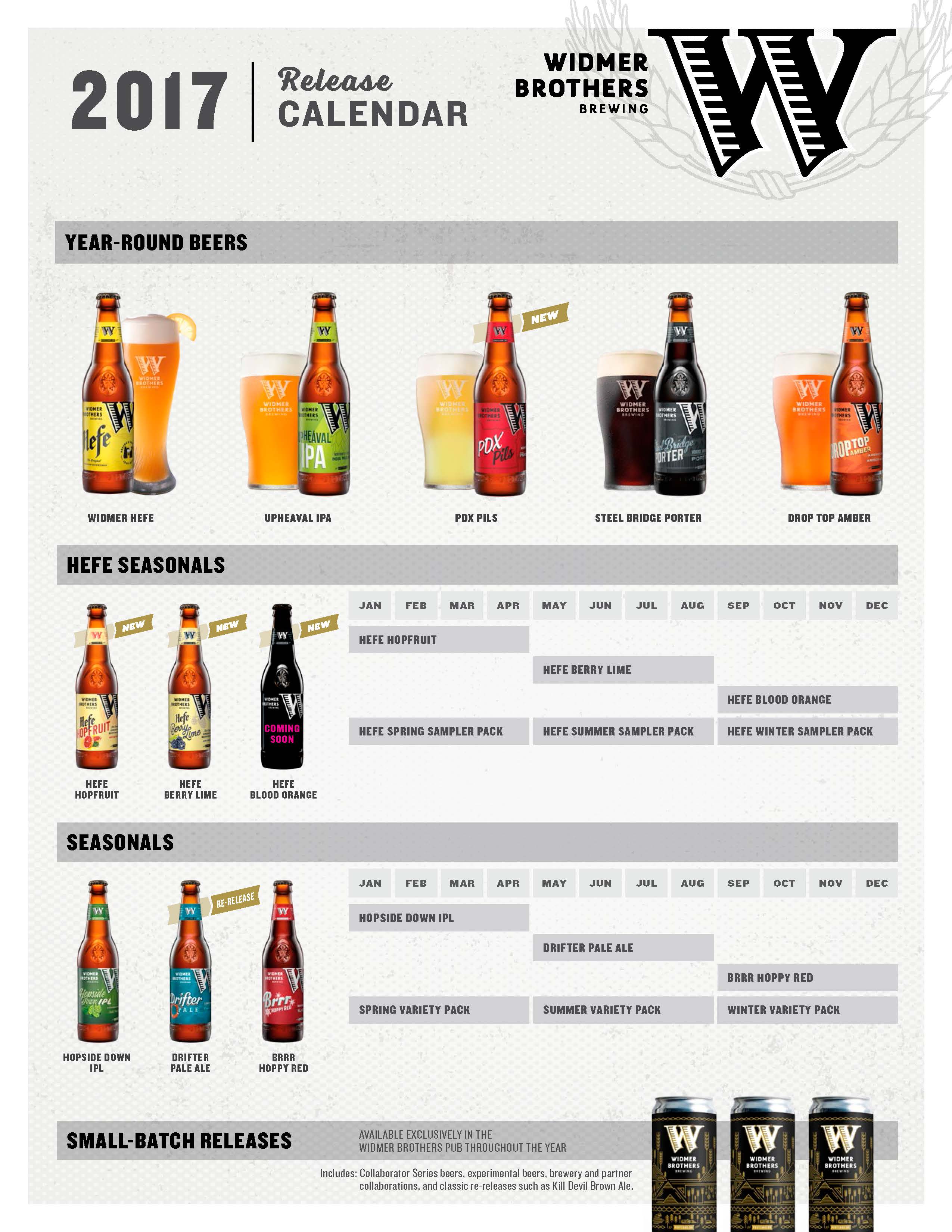 Hefe Hopfruit is not the only new release from Widmer Brothers as the brewery also has a few more new and rehashed beers and ciders ready for the marketplace in 2017. Here are additional details from the brewery’s press release that was sent out earlier today….

Square Mile Cider also announced a new seasonal offering, Ginger Pear, a semi-dry cider that is available now through July 2017. Ginger Pear is Square Mile’s original hard cider recipe with pear juice added to give it a tart complexity; after fermentation, ginger is added to give the cider a subtle spiciness. Ginger Pear will be available throughout the Pacific Northwest in six packs of 12-ounce bottles for the first half of the year.  The cidery is also unveiling new packaging across the portfolio of ciders in 2017, including The Original Apple Cider, Hopped Apple Cider, Ginger Pear, and Rosé Cider, which will be released this summer.

January 2017 is also spring seasonal time in the craft beer world, and Widmer Brothers is once again releasing fan-favorite Hopside Down India Pale Lager (IPL). Hopside Down IPL combines the hoppiness of a traditional IPA with the clean character and finish of a cold-fermented lager. This approachable lager captures the essence of spring with a blend of a crisp lager profile and the aroma and flavor of Cascade hops.

The official launch party for Hopside Down IPL and Square Mile’s Ginger Pear Cider will take place at the Widmer Brothers Brewery and Pub in North Portland on February 9, 2017. The party runs from 4:00 – 7:00 p.m. and will feature Hopside Down and Ginger Pear being poured side-by-side with special, infused versions of each running through Randalls.

The most notable newcomers to the 2017 lineup available later this year are PDX Pils and Drifter Pale Ale. PDX Pils is a hoppy pilsner first brewed in 2015, which will now be available in six packs. The beer quickly became a pub-favorite and it won Gold in the Pilsner category at the Oregon Beer Awards in 2016. Drifter Pale Ale is coming out of retirement in 2017 as Widmer Brothers summer seasonal, and is the classic, citrusy pale ale fans came to know and love while it was in Widmer Brothers year-round lineup from 2009 to 2013.

About Square Mile Ginger Pear
For the journey ahead, we bring you our newest seasonal release, Ginger Pear Apple Cider. We start by adding pears to our classic hard cider for a tart body, and finish with ginger for a perfectly subtle spice. We’re gingerly rooted in the Pacific Northwest. With this in your pack, you’ll have all you need to get out there and explore, one square mile at a time.
ABV: 6.7%

About Hopside Down IPL
We’re turning things deliciously upside down with an aggressively hopped, cold-fermented brew that brings together the clean, crisp finish of a lager with the hoppy aroma and character of an IPA. Prost! To turning convention on its head.
MALTS: Caramel 10L, Pale
HOPS: Alchemy for bittering, and Cascade for aroma
OG: 15.1 P
AE: 2.7 P
ABV: 6.7%
Color: 8.0 SRM
IBU: 65