This is the time of the year when Deschutes Brewery will host its release of its popular barrel-aged imperial stout, The Abyss. For 2019 the Bend brewer will also release two variants – The Abyss Port and The Abyss Old World. In addition to these three beers, Deschutes has also released The Dissident and Fresh Funk Wild IPA.

“We’re thrilled to have this diverse lineup of beers rolling out to our fans,” said Ben Kehs, assistant brewmaster of Deschutes’ barrel program, in a statement.  “There is something for everyone in here, whether you are looking for a big, flavorful stout, fruit forward sour ale, or a marriage of brett and hops.”

Here are descriptions on these five releases provided by Deschutes Brewery…

The Abyss
The classic Abyss is a deep, dark, barrel-aged Imperial Stout with hints of molasses, licorice, vanilla and cherry bark and is one of the brewery’s most recognized Reserves and award-winning brews since its first release in 2006. 11.2% ABV | 74 IBUs

The Abyss Port
The Abyss Port is the Imperial Stout 100% aged in Port barrels with all the familiar hallmarks of The Abyss like warming notes of coffee, smoky, chocolate, roast, molasses, licorice, vanilla, and cherry, but coupled with plum, jam, and grape notes as well as a distinct oak flavor from the Port barrels, some of which are over 30 years old and constructed from chestnut, South American oak, and Portuguese oak.  12%ABV | 70 IBUs

The Abyss Old World
The Abyss Old World evokes images of a 50 year old Spanish wine cellar. This variant is 80% aged in 30- 60 year old Sherry barrels and also includes all the familiar trademarks of The Abyss, but adds spice with a subtle black pepper aroma, coupled with raisin and fruit cake notes, and a very distinct oak flavor from the sherry barrels.  12% ABV | 74 IBUs. 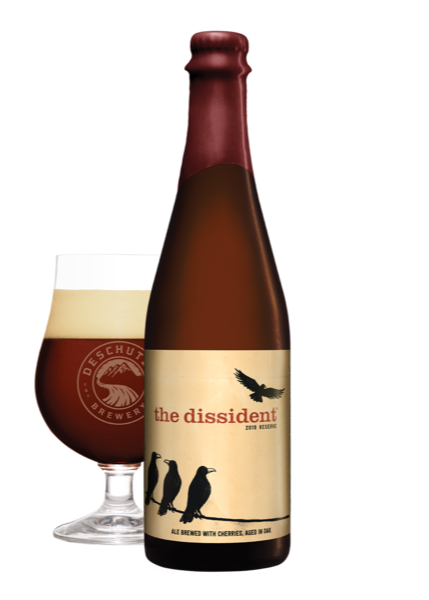 The Dissident
The Dissident is a distinctive barrel-aged Belgian-style sour brown ale that is brewed with fresh cherries, fermented with wild yeast and matured in oak. This special ale reveals unmatched complexity of flavor with a pleasant, bright acidity and is unlike anything else Deschutes Brewery brews, worthy of the name, The Dissident. 10.8% ABV | 40 IBUs