In time for the winter season that’s just a few weeks away, Laurelwood Brewing has four beers hitting the taps, three of which will be available in cans or bottles. This new lineup includes Kids These Daze Hazy India Pale Ale, Tree Topper India Pale Ale, Hopped Up Amber, and Strong Scotch Ale.

Kids These Daze Hazy India Pale Ale
Pub Favorite, and Oregon Beer Awards Gold Medal-winning Hazy IPA is back! Kids These Daze is brewed with a combination of Northern & Southern hemisphere hops creating a well-balanced ale with juicy, tropical hop bitterness and pineapple/passion fruit aromas.
ABV: 6.5%  IBU: 45
Available only at the Laurelwood Pub on Draft and in 4pk/16oz Cans.

Tree Topper India Pale Ale
This easy-drinking IPA smells of pine and orange blossom. It has a smooth pleasant bitterness balanced by malty notes of almond and honey.
ABV: 7.0%  IBU: 74
Available at the Laurelwood Pub on Draft and in 4pk/16oz Cans. Cans are also available in select bottle shops as well as Costco stores throughout Oregon.

Hopped Up Amber
Questing for the ever elusive perfect IPA/Lager crossover, we’ve hopped up this golden amber lager with plenty of front-end bittering hops and an intricate blend of tropical, herbal, floral flavor and aroma hops. Smooth yet pronounced hop bitterness pleasantly lingers through complex hop flavors backed by crisp amber lager base.
ABV: 6.0%  IBU: 60
Available only at the Laurelwood Pub on Draft. 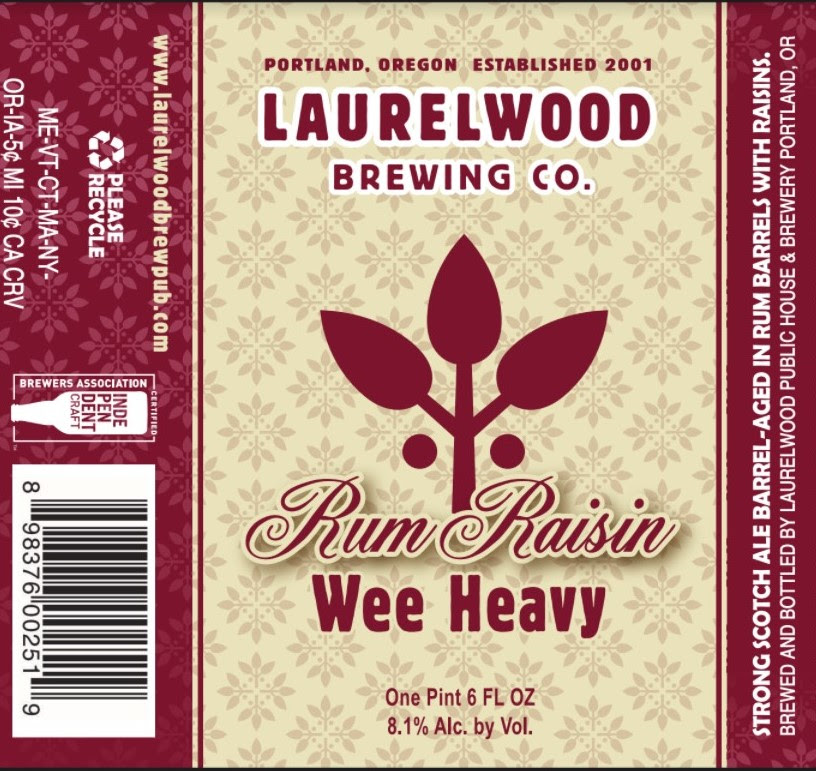 Strong Scotch Ale
Seducing the senses with deep ruby highlights, frothy head, aromas of toffee and honey-dipped figs; this Wee Heavy’s luscious mouthfeel and deeply complex flavors are the stuff dreams are made of…and that’s just the start! We took this beautiful base beer and added loads of raisins and aged the beer on Rum Barrels.
ABV: 8.1%  IBU: 30
Extremely limited availability on Draft and in 22oz Single Bottles. Available only at the Laurelwood Pub.