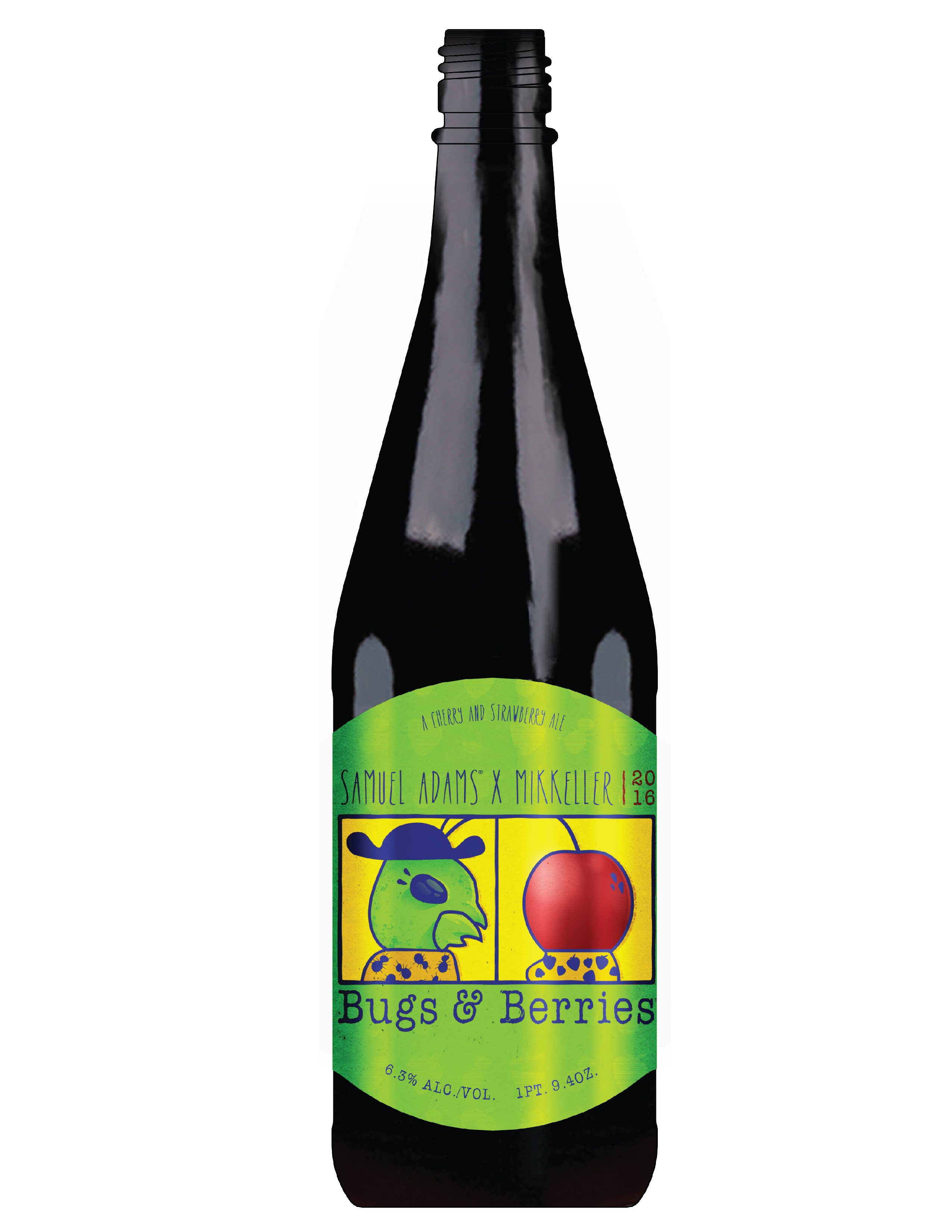 BOSTON, [July 28, 2016] – To commemorate the first-ever Copenhagen Beer Celebration (CBC) in Boston this September, the brewers from Samuel Adams and Mikkeller, both celebrated for their passion for innovation, experimentation, and collaboration teamed up to craft Bugs & Berries.The distinct brew incorporates ingredients native to the regions where both brewers call home.  The CBC (Copenhagen Beer Celebration) beer festival has been held for years in Copenhagen, Denmark and features many craft breweries from around the world.  The brewers are now bringing the festival to the U.S. for the first time September 23-24.

Bugs and Berries is an American wild ale brewed with a wheat base and wild yeast strains with an addition of sour cherries from Denmark and strawberries from New England. In Denmark, the brewers visited the cherry orchard and wine farm, Frederiksdal Estate, to collect wild yeasts and cherries. In the U.S., the yeasts come from New York, and the strawberries from a variety of strawberry patches in New England.

“When we decided to bring the Copenhagen Beer Celebration to Boston, we knew we wanted to offer craft beer fans something extra special, and wanted a partner in crime that shared our same passion for innovation and experimentation in beer,” said Mikkel Borg Bjergsø, founder of Mikkeller.  “One of the things we wanted to focus on as part of the collaboration was the role that the different wild yeasts would contribute in the fermentation, which is part of the inspiration for the name Bugs & Berries. We look forward to making this unique and complex beer available this September, made from the best raw material ever: ‘curiosity.’”

“Much like Samuel Adams in the U.S., Mikkeller has been an innovator and pioneer of the Nordic craft beer movement for years. And like myself, they got started by brewing crazy experiments in their kitchen,” said Jim Koch, founder and brewer of Samuel Adams. “Together we’ve had a lot of fun experimenting over the past few months with different ingredients and in the spirit of collaboration we’ve sourced ingredients from both countries making this beer a true international collaboration.”

Additional Details About the Brew
Yeast is a critical component in beer and converts the sugars from grain and fruit into alcohol. The wild yeasts, or “Bugs,” in Bugs & Berries were carefully harvested and underwent thorough analysis before being sent. During the review, the brewers chose the strains and organisms that would produce the most desirable, pleasant and interesting flavors and aromas.

The resulting beer pours like a hazy wheat ale and tastes tart and fruity from the combination of wild yeasts, sour cherries and strawberries.

Availability: This limited release brew will only be available for a limited time in September during CBC and at the Samuel Adams Brewery in Boston.

ABOUT THE BOSTON BEER COMPANY:
The Boston Beer Company began in 1984 with a generations-old family recipe that Founder and Brewer Jim Koch uncovered in his father’s attic. Inspired and unafraid to challenge conventional thinking about beer, Jim brought the recipe to life in his kitchen. Pleased with the results of his work, Jim decided to sample his beer with bars in Boston in the hopes that drinkers would appreciate the complex, full-flavored beer he brewed fresh in America. That beer was aptly named Samuel Adams Boston Lager, in recognition of one of our nation’s great founding fathers, a man of independent mind and spirit. Little did Jim know at the time, Samuel Adams Boston Lager would soon become a catalyst of the American craft beer revolution.

Today, The Boston Beer Company brews more than 60 styles of beer. It relentlessly pursues the development of new styles and the perfection of classic beers by searching the world for the finest ingredients. Using the traditional four vessel brewing process, the Company often takes extra steps like dry-hopping, barrel-aging and a secondary fermentation known as krausening. The Company has also pioneered another revolution, the ‘extreme beer’ movement, where it seeks to challenge drinker’s perceptions of what beer can be. The Boston Beer Company has been committed to elevating the image of American craft beer by entering festivals and competitions around the globe, and is one of world’s most awarded breweries at international beer competitions. As an independent company, brewing quality beer remains its primary focus. Although Samuel Adams beer is America’s leading craft beer, it accounts for only one percent of the U.S. beer market. The Boston Beer Company will continue its independently-minded quest to brew great beer and to advocate for the growth of craft beer across America. For more information, please visit www.samueladams.com.

ABOUT MIKKELLER
Once upon a time Mikkel Borg Bjergsø was a math and physics teacher that started experimenting with hops, malt and yeast back home in his kitchen in Copenhagen. Today Mikkel Borg Bjergsø exports his micro brewed beer to 40 different countries and is internationally acclaimed as one of the most innovative and cutting edge brewers in the world.