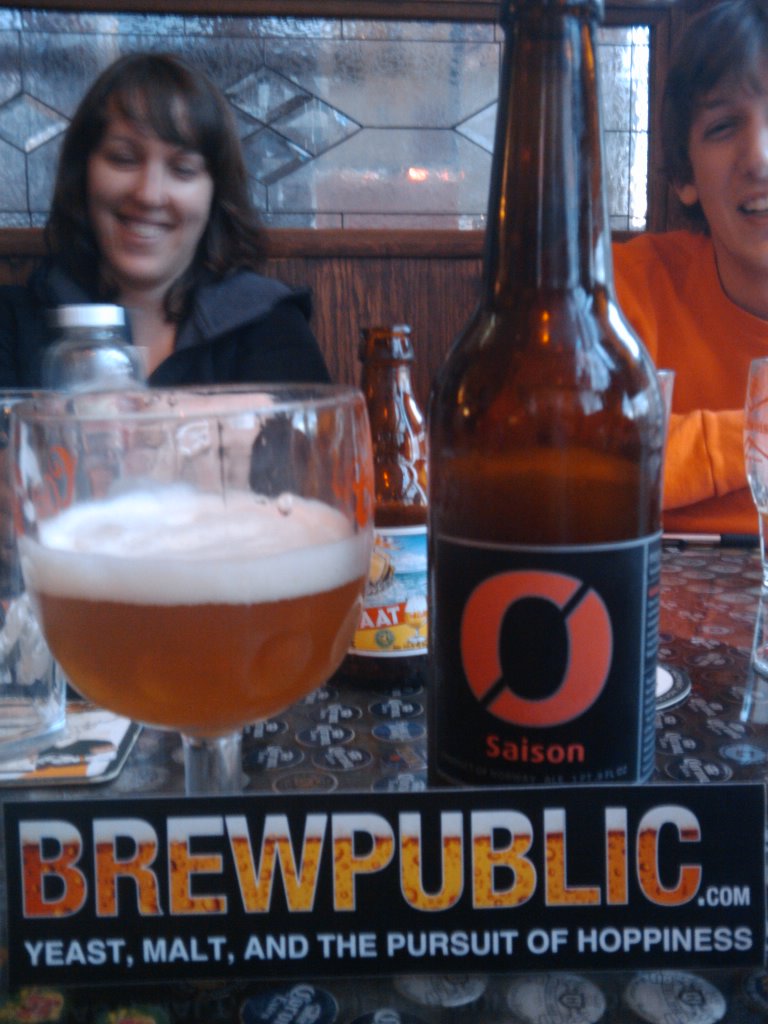 Here in Beervana there’s always something going on concerning craft beer. We’ve been informed of a few upcoming events around town that you might want to check out.

By The Bottle Big Beer Fest

Over the river and through the wood barrels we go to Vancouver, Washington’s finest craft beer destination. By The Bottle not only features a vast array of beers (many of which are not distributed in Oregon), but are now pouring some delectable tap offering in the back taproom. The owners of the shop have extended the hours this weekend to accomodate your winter warming needs and holiday purchases. Bottle Shop & Tap Room hours: Friday/Saturday: Noon to 11PM; Sunday: Noon-8PM

Here’s a look at what you can expect to find on tap this weekend at BTB: 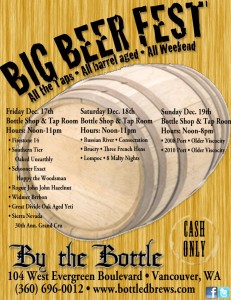 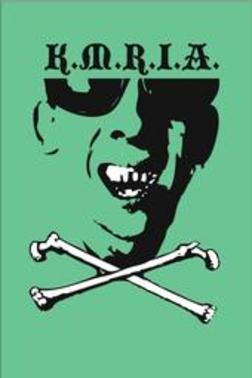 Friday night you can try a new HUB brew designed by beer geek and scribe Abram Goldman-Armstrong. Going down at the Secret Society Ballroom in Portland, this event will also feature the music of K.M.R.I.A (Kiss My Royal Irish Arse), a Pogues cover band. The brew known as “Celtopunk” is described by Goldman-Armstrong as “a Cork-style Dry Irish Stout.” Goldman-Armstrong says the beer is from a recipe he’s been homebrewing for the past 15 years. This one-night only brew was made at Hopworks’ newly acquired Hopomatic nano brew system, so supplies are extremely limited. Taps at 9PM. Oi!

K.M.R.I.A plays POGUES music. Nothing but, and are a celebration of their virtuosity, songcraft, and spirit.

The band features an all star cast of Pacific Northwest rock – Chris Funk and Jenny Conlee of the DECEMBERISTS, Ezra Holbrook of DR THEOPOLIS, Scott McCaughey of THE MINUS 5, YOUNG FRESH FELLOWS & REM sideman, Hanz Araki of THE WHYOS & PAPERBOYS, Jesse Emerson of AMELIA, singer CASEY…

K.M.R.I.A plays POGUES music. Nothing but, and are a celebration of their virtuosity, songcraft, and spirit.

The band features an all star cast of Pacific Northwest rock – Chris Funk and Jenny Conlee of the DECEMBERISTS, Ezra Holbrook of DR THEOPOLIS, Scott McCaughey of THE MINUS 5, YOUNG FRESH FELLOWS & REM sideman, Hanz Araki of THE WHYOS & PAPERBOYS, Jesse Emerson of AMELIA, singer CASEY NEILL, and DEREK BROWN of the EELS, and FERNANDO.

The show features as much grit, bluster, and drunken glory as can be mustered without sacrificing the intricacies of the material. The name KMRIA is an acronym for “Kiss my Royal Irish Ass” excerpted from James Joyce’s Ulysses and used in the Pogues song “Transmetropolitan”. KMRIA only plays shows around XMAS and ST PATS, and this year due to scheduling conflicts, the band is only able to do an Xmas show. Come and get it while you can!

Hopworks Tastings in the Central Valley

Hopworks brewer Jaime Rodriguez will be around Eugene on Friday and Saturday for some interesting tastings. 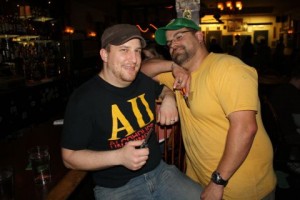 On Friday December 17 at the Bier Stein in Eugene from 4-7PM, folks in the Eugene area will be able to get a taste of the only Kentucky Christmas bourbon barrel-aged brew in town. Rodriguez will also be bringing a special keg of Pig War English-style Imperial IPA grown with estate hops from the San Juan Islands.

Looks like this could indeed be the weekend to venture to Eugene for great beer. Relatively new bottle shop 16 Tons will be hosting one awesome event for beer geeks and sour lovers. Some of the best tart and wild ales from Oregon pouring on tap as well as an assortment of bottled specialties to pucker your palate. Read the complete details in our previous post here.