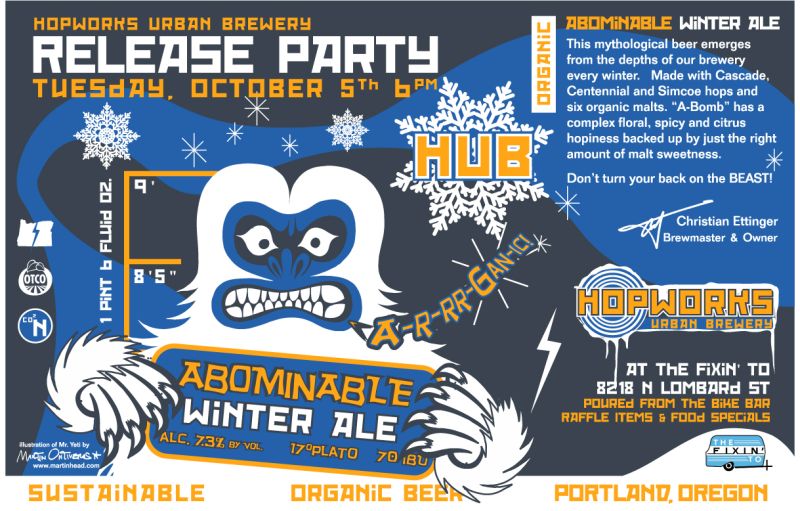 With a growing chill in the air, and a slowly growing howl in the wind, it could mean one thing… Hopworks Urban Brewery‘s (HUB) Abominable is coming!

This mythological beer emerges from the depths of Hopworks’ brewery every winter.   Made with Cascade, Centennial and Simcoe hops and six organic malts. “Abomb” has a complex floral, spicy and citrus hopiness backed up by just the right amount of malt sweetness.  Don’t turn your back on the BEAST!

HUB will be doing a special release at The Fixin’ To bar at 8218 N. Lombard in St. Johns on Tuesday, October 5th from 6-9 pm.  Abominable Winter Ale will be pouring from the Bike Bar on their recently covered patio, while the kitchen will be featuring some food specials concocted just for that night.

Hopworks’ in house release will be the following evening, Wednesday, October 6th starting at 4PM.  So stop in either night for a pint of this grizzly, delicious Northwest Winter Ale… or both nights!  Or, if you’d rather have an Abominable in the comfort of your own den, check out their new bottles hitting store shelves in the coming weeks.  The design is almost as ferocious as the beer.

It’s time!  It’s here!  Hopworks received their nano brewing system last month, and now they’re ready to break it in!  But first, a name!  We’re opening up the naming to all Hopworks patrons in a contest of epic, (or, maybe nano?), proportions. Send your name suggestions to NameTheNano@HopworksBeer.com with ‘Name the Nano’ in the subject line.  They’ll be choosing the winner on Tuesday October 12th.

And what will the lucky person get?  None other than one year’s Mug Club membership!  Already a member?  Next year’s on HUB!  Not yet a member, well here’s your chance to get the big pint, save on all those you’ve already been drinking and enjoy all the perks your barmates have been digging on since the beginning, (parties, merchandise and the beer…  the beer!).

So help Hopworks out, email in your name suggestion or grab a slip at the bar today and submit your clever name for their bouncing baby pilot system.