Pendleton, Oregon is probably best known for its Round Up Rodeo held each year in mid September. Hundreds, maybe even thousands come out and watch Professional Bull Riding (PBR), pageants and parades. Something will be different at this year’s Round Up. This will be the first year that visitors and locals alike will be able to enjoy beer from the town’s first microbrewery. Prodigal Son Brewing opened its doors about three months ago and has been converting the local Coors drinkers into craft beer drinkers. 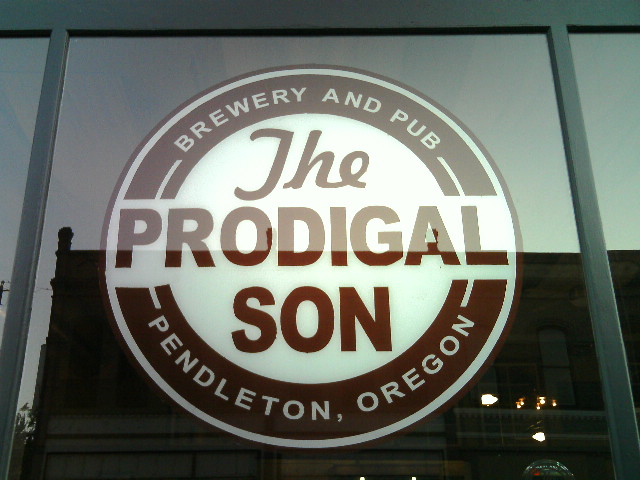 An early glimpse of Prodigal Son was provided by fellow blogger Jason Wallace in a post he contributed to Brewpublic back in May 2010 (originally appearing on Jason’s Beer & Music blog). Making the three-hour drive from Portland to Pendleton, we greatly anticipated experiencing the brewpub first hand. Upon entering downtown Pendleton, the first building we see to our left is Prodigal Son. The huge storefront had a great presence on the street. Walking into this spacious restaurant with pub in the back it is hard to image this space use to house a Packard Dealership back in the day. Rustic looking with old murals on a brick wall, thick wooden pillars hold up a vaulted ceiling making the space appear even more imposing. Instantly we knew that this is great spot for families and friends to gather and enjoy a meal and a beer. 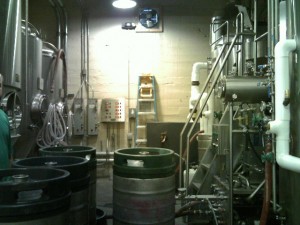 Operating on a 10-barrel brew system from a now defunct Bell Tower Brewery of Vancouver, Washington, the system sat unused in storage until it was obtained and revitalized by Prodigal Son. Brewmaster Brian Harder attended Siebel Institute in Chicago before becoming a brewer at Rogue in Newport, Oregon. When approached by childhood friend Tim Guenther and Guenther’s wife Jennifer, Harder knew opening a place of his own would be the right move. The three, along with another long time friend, Matthew Barnes moved forward headlong into this venture. Excited to be apart of history in Pendleton, Barnes accepted the position of Prodigal Son’s chef and kitchen manager.

While Pendleton might not be the first location one might think of when wanting to open a brewpub, it made perfect sense for these four friends who wanted to bring a part of Oregon culture to their hometown. Further, still having family in the area made the move a little easier for each of them. To make matters even better, the City of Pendleton has been continually undergoing considerable urban renewal efforts. According to the city’s website, “Pendleton’s Urban Renewal Plan was created by members of city council, citizens, business leaders, and government officials in 2003 to increase the vitality of downtown and to connect the Urban Renewal District to the Umatilla riverfront. Its focus is to rejuvenate Pendleton as a convention and tourism destination and to develop a range of housing options in order to create a mixed-use downtown.” With the city offering grants and loans to improve the historic downtown area the dream of Pendleton’s first modern day craft brewery was born.

On a recent visit, we sat down with Tim Guenther (Proprietor) Brian Harder (Brewmaster) and Matthew Barnes (Chef & Kitchen Manager) to find out more about this up and coming brewery. 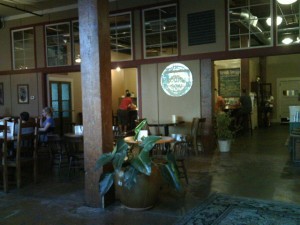 How did Prodigal Son Brewing begin in Pendleton, Oregon?

Tim Guenther: We got started in Pendleton because there are no other breweries or brewpubs here and that was the original motivation for getting started here. My folks live in Pendleton and I was living in Portland at the time. There would be no place really to go when I came to visit. Brian (the Brewmaster) was living in Newport, OR and we started talking to him. There was an urban renewal project happening in Pendleton to renovate some of the old buildings downtown. There seemed like there was great potential for a pub with good atmosphere, somewhere where I wish I could go and drink beer. That was the motivation for getting something started here.

Tim, how do you know Brian and Matthew?

TG: We actually all went to school together. Matthew was in the same class and Brian was friends with my younger brother. 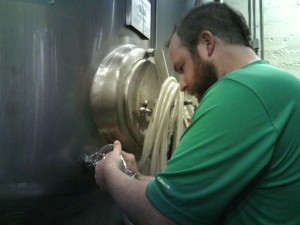 Brian, living in Newport, Oregon, you must have been working at Rogue?

Brian Harder: That is correct. I spent some time brewing down there. It is where I cut my teeth, it is where I learned to brew. I really enjoyed working there, I worked with some of the best people in the business. They have an incredible brew staff and everyone there I learned a lot from.

Tell us about the beers you have on tap at Prodigal Son.

BH: To start off, I am a big fan of Porters. I guess that comes from brewing on the coast too, you get use to having stormy weather nine months out of the year so you really need a dark style beer to get you through the winter time. So that is were I got my affection for Porter from. That and the first really beer I got into was a Porter. Having that first sip you don’t think this is normal beer, like the stuff you drink at parties or the stuff your parents drink. Porter was the gateway beer for me. There is a special spot in my heart for Porters.

Being from Pendleton, we thought it was important to have a wheat beer on tap because this is a big agricultural community. There are a lot of wheat farmers out here so our beer should reflect what is being grown out here as well.

We have an Amber and an IPA. Being from the Northwest you have to have an IPA, there is no excuse.

The Amber was one of our first adventures. We decided to experiment so we decided to use Rye to set it apart from other beers. We ferment really dry. That is my goal as a brewer, I like drier beers, I love hops as well. My purpose as a brewer is to make a drier beer that exenterates the hops but keeps it from being astringent. 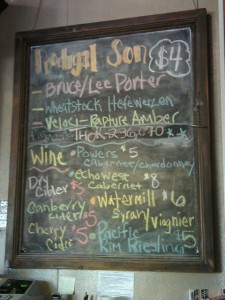 Matthew, as the head chef, do you try to incorporate the beers into the recipes or offer pairing suggestions with the specials on the dinner menu?

Matthew Barnes: I try to do a little bit of that. Right now we have a Porter marinated flank steak sandwich. Something we have started doing and will continuing doing is a three-course dinner where we pair the beers with each course. There are a lot of great agriculture resources out here. I grew up here and there is a lot more available, a lot of farmer’s markets to go to and it is fun to pair with the beer that we have.

We heard mention of experimental grains that may be made available to you. Tell me more about that.

BH: OSU has an experimental grain program in the area and we hear a lot about it. I was out there a couple of weeks ago talking to some folk and the problem is there is a lot of grain but there is no micro-maltery. So what we need to do is get the micro-patches to a micro-maltery so it can be transformed into something that as a brewer I can turn into microbrew. I have been hearing a lot about a malt called Charles and am excited to use it, once we are able to malt it that is.

You decided to open the brewery out here because you have family here. How has the community been receiving there being a brewery in town.

TG: So far amazingly well. People will come in and have a couple of beers and think “Wouldn’t it be cool to open up our own brewpub.” But so far no one has carried it forward. I think that many people have had the idea to do this here but for whatever reason no one has quite carried it there. So by the time we did there was definitely a backlog of anticipation and interest of having something like this here. I thought we were going to have people come in and want to order a Keystone or Coors light or whatever and think what is this microbeer stuff. Instead they come in try the Porter and the Hefe, the Hefe is probably their favorite and they seem impressed by the taste.

MB: It’s neat to see people come in from a wide range of backgrounds, all walks of life and drink the beers. The stereo-typical person you see come in here is usually a Coors light kind of guy but then they order a Porter and talk about how much they love it. It is really neat to see.

BH: I do have to say I was really surprised how much people like Porter out here. I thought I was going to be the only one and I was like “Tim, please let me brew a Porter. I’ll drink it if no one else does.” And as much as the locals like the Hefe, they really like the Porter too. Even out here is Coors light country. We are out of IPA today so they even really like the hoppy beers. The funny thing is people started to order their Hefe with grapefruit. That is the new thing in Pendleton. It has always been popular to put lemon or an orange wedge in your Hefe but now grapefruit. Maybe people are just starting to run out of citrus to put in their beer. It’s not gimmicky but it works, it is actually a good pairing. It’s unique, it’s quirky.

Is there any history to the building you are located in?

TG: It was built in 1915 and was a Packard dealership. They sold Packards and other high end luxury cars until the depression and then, I’m not sure of the exact history but they started selling GMCs and Buicks in the 1940s and then Studebakers until the 1950s. Then they started selling Caterpillars, John Deer and other heavy farmer equipment. After that it was a second hand store and really no one has really loved it since it was built. We kept it pretty rustic. The mural behind us was covered over, painted over and was on the neighbors building. It was for the Albers Brothers Milling Company, which is an actual brand that is still around. There was a bakery next door when the building first went up and the first thing you would see as you drive into town was this mural. Since, it has been preserved indoors for 90 years until we uncovered it when getting our place ready.

Any closing comments that you would like to make about Prodigal Son?

TG: I just really wanted to bring good beer to Eastern Oregon besides Terminal Gravity, which is the domination for beer over here.

MB: We are glad to bring it back to our hometown. It is kind of exciting to be a part of something here.

BH: And we never thought we would come home again but here we are. That’s why we are named Prodigal Son.

TG: It is a kind of returning home story. It is the story of our lives.

BH: Thanks for coming all the way out here.

Hey, anything for beer! Cheers guys!!