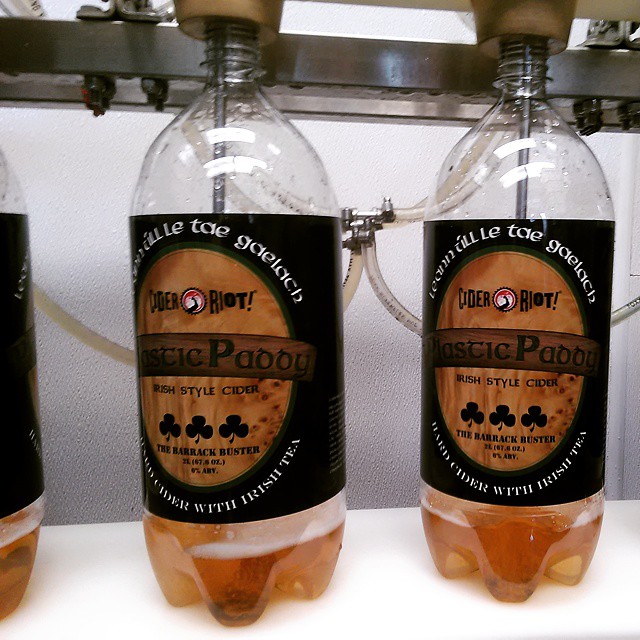 Cider Riot! makes some serious ciders from rare cider apples. They also like to have fun. Plastic Paddy is a fun-loving easy drinking cider released in honor of the 2-litres of Irish cider that Cider Riot! founder and cidermaker Abram Goldman-Armstrong enjoyed so much as a student at University College Cork.

American dessert apples lack the characteristic tannins of European cider apples. In order to replicate the flavor profile of a dry Irish cider, we use Barry’s Gold Blend tea from County Cork to infuse the cider with just enough tannins to balance the natural acids of the Hood River and Yakima grown dessert apples used to make it.

Plastic Paddy is packaged in the traditional 2-liter Irish flagon, making it the perfect package for picnics and the old Cork tradition of gatting (drinking in parks)*. A flagon is the perfect size to share with friends and family, translating to 67 ounces, or just larger than a growler, a two-liter holds 4.2 US pints.

Plastic Paddy is released in February for Paddy’s Day, and is available through the end of May in flagons. Limited draught will be available at select Portland pubs in March.

Cider Riot! is an urban cidery located in Portland’s North Tabor neighborhood just off East Burnside Street, dedicated to the production of refreshing dry ciders. Cider Riot! was founded in 2013 by Abram Goldman-Armstrong, after 18 years as a home cidermaker and home brewer. Cider Riot!’s dry ciders are currently available on draft, and 500ml glass bottles in Oregon and British Columbia.

For more information Call Abram Goldman-Armstrong at 503-662-8275, or email ciderriot@gmail.com

*Cider Riot! reminds cider lovers that Portland Parks require a picnic permit in order to consume alcohol in a park. Permit applications are available from: http://www.portlandoregon.gov/parks/49142