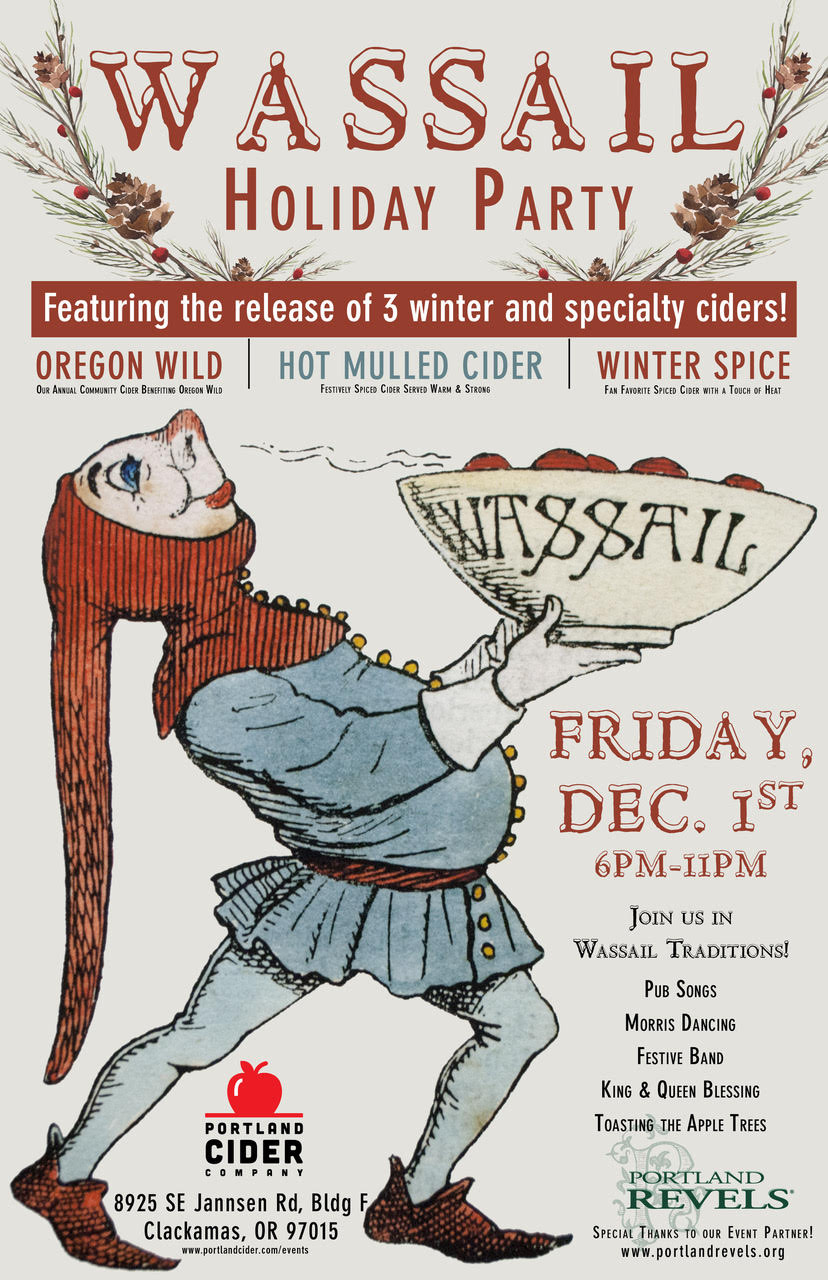 CLACKAMAS, Ore. – Nov. 13, 2017 – Portland Cider Company will host its annual Wassail Holiday Party – an event open to all ages of the public – on Friday, Dec. 1 from 6pm to 11pm at its Clackamas Pub & Cidery, located at 8925 SE Jannsen Rd., Bldg F. The Wassail Holiday Party features the release of three winter and specialty ciders, including Oregon Wild, a community cider hand pressed earlier this fall with donated apples collected from the backyards of neighbors in the Portland Metropolitan area.

The family friendly event will also feature entertainment provided by the Portland Revels, including Morris dancing, pub songs lead by festively dressed carolers, and live music. A King and Queen of the Wassail will lead guests through a proper “Toastings of the Apple Trees,” a Wassail tradition that stands the test of time, in which attendees help Portland Cider Company toast apple trees with cider to ensure a good apple harvest in the coming year.

One hundred percent of the net proceeds of the sales of the Oregon Wild cider will be donated to the Oregon Wild nonprofit conservation organization by way of the Oregon Brewshed Alliance, an outreach initiative made up of a coalition of brewers that works to protect the public and wildlands in the Northwest. Portland Cider Co. was the first cidery to join the Oregon Brewshed Alliance, and its PDX apple recycling collection program is its annual fundraiser for the organization.

About Portland Cider Company
Portland Cider Company was started in October 2012 by an Oregonian and a family of British expats with the mission of bringing cider, handcrafted in the English tradition, to the Northwest. It has two taproom locations: Portland Cider House at 3638 SE Hawthorne Blvd., Portland, OR 97214; and Taproom & Cidery at 8925 SE Jannsen Rd, Bldg. F, Clackamas, OR 97015.