The Fort George’s canning line will be rolling off the first cans of 1811 Lager for statewide distribution, providing rich visuals and audio.  The brewery, which happens to be on the grounds of the original settlement of Astoria, created this brew to commemorate Astoria’s 200-year history—the oldest US city west of the Rockies.  This pre-prohibition-style can of lager carries the official bicentennial seal and $10 thousand in proceeds will go toward bicentennial festivities, which begin in April. 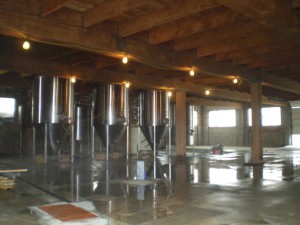 As the beer caning line itself is a reinvention of traditional Astoria canneries, it is this kind of resilience that has allowed the region’s heritage to survive two centuries. In spite of a decline in fishing and logging, Astoria has been in a renaissance.  The building the new brewery is located in, a former auto dealership, scarred downtown Astoria, empty for a decade.  This rebirth can be seen on surrounding blocks of downtown.

The Fort George’s grand opening event will take place at the new brewery, located in the Lovell Building, which has an entrance on 14th street in-between Duane and Exchange Streets in downtown Astoria.  Refreshments will be served.  The event should wrap up by 3:00 p.m