To celebrate Oregon Craft Beer Month, Full Sail will release a new beer in their Brewer’s Share Experimentalline up: Clinton’s Wertzbier brewed by Brewer Clinton Wertzbaugher. Wertzbier is a Rauchbier which is a traditional German beer style using smoked barley malt. In fact, rauch means smoke in German. Used modestly in this recipe, the smoked malt imparts a delicate smoky character to Wertzbier. Munich malt complements with a pleasant sweetness. At 5.6% ABV and 17.5 IBU, this lager has a light body with a spicy hop nose from Czech Saaz hops, and finishes clean and crisp with a hint of smoke.

“I made this beer to celebrate the good times of summer. Two of my favorite things about the season are campfires and barbeques with friends.  Since I can’t always be around a glowing fire with buddies, I wanted to brew a Rauchbier to remind me of these good times. In just a sip, the smokiness transforms my bar stool into a camp chair. As a summer beer, it is brewed lighter in alcohol and less smoky than a traditional Rauchbier.  I used my favorite hops, Saaz and Crystal, and balanced it with Smoked, Munich and pale 2 Row malts. It makes for a unique and easy-going summer companion,” said Wertzbaugher. 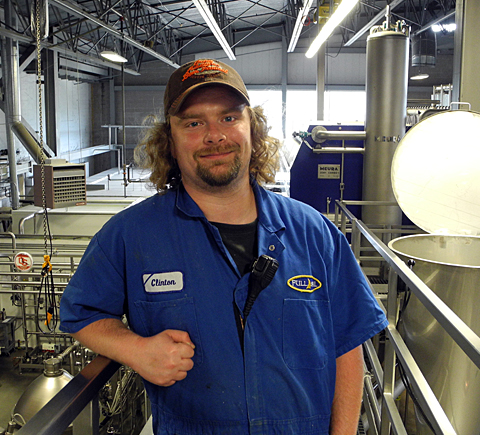 With each Brewer’s Share series beer, Full Sail picks a local charity to receive a portion of the proceeds from the sale of the beer. Clinton has chosen to support the Oregon Chapter of the National Multiple Sclerosis Society and every keg of Clinton’s Wertzbier benefits this organization. The National MS Society funds more MS research, provides more services to individuals with MS, offers more professional education and furthers more advocacy efforts than any other MS organization in the world.