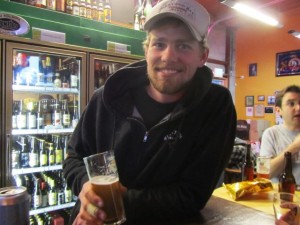 BREWVANA Brewery Tours is hosting a Connoisseur Tour for local craft beer enthusiasts.  The tour features Mike Branes,  Migration Brewery’s head brewer, who will be leading the tour to two breweries, a public house and an English- style pub. Taking place this Sunday, February 12th from 1-5pm, the tour is $69/ person and is all inclusive.

The tour begins with a beer sampling at Migration Brewery and a tour of the facility, where Mike will introduce his brewery and discuss the beers that he brews. The next stop is the NW Lucky Lab where head brewer Ben Flerchinger will give a tour of his brewery and participants will taste their beers.  Lunch and beer will be served at East Burn, a public house that focuses on craft beers with 16 rotating taps. The final stop will be the infamous Horse Brass Pub featuring over 50 different local, regional and international varieties of beer in a traditional English-style pub.

Ticket’s for BREWVANA’s Connoisseur Tour with Mike Branes are $69 per person and are all inclusive, consisting of the tours, beer tastings, and lunch.  Register online @ http://www.experiencebrewvana.com/register/?regevent_action=register&event_id=201

Mike Branes started his career at Barley John’s in Minnesota where he learned and was inspired by head brewer and owner John Moore. There he cleaned kegs, and other brewery tasks in his 3-year internship, receiving a wealth of knowledge as his payment for these laborious tasks.  Mike took this knowledge and harnessed his craft for the next 8 years as a home brewer, while working as a pubster for the Lucky Labrador and distributing for Mt. People’s organic beer and wine distribution.  In 2008 Mike took the leap of faith and trust in his ability to become the head brewer and partner of Migration Brewing Co.

Each month, Brewvana’s Connoisseur Tour gives a different local brewer the opportunity to showcase the beers that they live to brew and create their own tour based on their favorite places around town. It is their chance to share their knowledge of beer with their community.

BREWVANA is the Ultimate Beer Tour Experience, committed to embracing the history and culture of the craft brewing industry in Portland, Oregon. Transportation is provided on a 14-passenger bus equipped with cup holders, a beer inspired mural and the Beeriodic Table for reference.