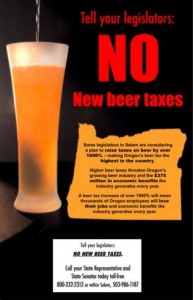 Why is the latest Oregon beer tax proposal (House Bill 2461) a good idea?

Some folks in Salem, like Oregon District 46 Rep. Ben Cannon (as well as Sen. Dingfelder, Sen. Morrisette, Sen.Rep. Dembrow, Sen. Rosenbaum) believe raising the current tax of $2.60 per barrel to $49.61 (~1900%) to pay for drug and alcohol treatment programs is a sound idea.  It has been said by several opponents such as myself, that it sounds like these proponents of the bill need treatment, because whatever they are on is hazing their view of what craft brewing means to the economy, industry, and identity of our state .  The reality is that craft brewing is such an important part of Oregon’s economy that raising the tax on it would likely stunt the development of mom and pop brewers and squander a unique trend in the Beaver State.  The proposed 1900% increase would move Oregon’s beer tax from 43rd in the country to #1.  Oregon’s beer tax rate is already higher than beer tax rates in Colorado (home of Coors) , Missouri (home of In-Bev) and Wisconsin (home of Miller). Oregonians currently consume more of their own craft product than any other state in the country. According to the Oregon’s Brewers Guild, over the last 5 years Oregon-brewed beer consumed in Oregon rose from 9.9% to 12%.1. Passing this purported tax, many believe, would heavily impede start-up breweries and discourage consumption of both Oregon craft beer,craft brews from other states, and innovative imported beers. Taxes such as this also will perhaps undermine the spirit of craft brewing and sustainability in our fair state. 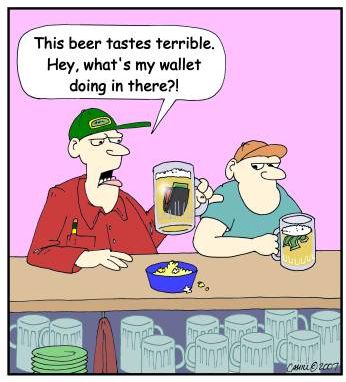 I just got off the phone with Rep. Cannon’s legislative aid Christy Splitt.  Splitt claimed that the tax is necessary to pay for drug and alcohol treatment and education.  House Bill 2461 uses language that excludes “craft brew” and rather summates all beer sold in Oregon as “malt beverage(s)”.   Splitt, when asked about what beer she drinks, stumbled for a moment before admitting “I am a cheap beer drinker.”  When she was asked what craft beer she has purchased, could only site Full Sail Session.

Turning to craft brewers to provide money to treat and educate folks drugs and alcohol many believe would halter a sizable portion of the state’s economy.  The Oregon Brewers Guild points out that the total economic impact from the beer industry on Oregon’s economy is $2.25 billion, and and 37% of all draft beer consumed annually in Oregon is brewed in Oregon.  Also, over the last five years, more than 2300 jobs statewide were created from Oregon craft breweries. Sorry, Cannon, and company, while we support your support of education and the environment, this measure is just not going to cut it.  Not here.

Help keep craft beer in Oregon by opposing this measure.  You can contribute by signing a petition here: http://petitionspot.com/petitions/NoNewOregonBeerTax

If you would like to voice your concern via telephone, you can call proponent of this high tax, Rep. Ben Cannon at 503-986-1446 or email him at rep.bencannon@state.or.us

If you are a member of Facebook, you can also show your support online by joining the No New Oregon Beer Tax group set up by proponent Kerry Finsand.

Also, you can garner a better understanding of the significance of Oregon’s craft brewing by visiting the OBG’s fact sheet.

Also, here’s a video from KGW that touches on tsome key points surrounding this proposed tax: