Here we conclude part five of five in our exclusive interview with Rob Widmer. We hit Rob with some questions about fruit in beer, the political connotations of the “W” Series beers, and even squeeze a German joke out of him. This month marks Widmer Brothers‘ 25th Anniversary.

Rob Widmer: Obviously Germans didn’t have lemons 100 years ago. So, I still don’t know how it really started over there. In Germany, they don’t put lemons in hefeweizen. And, depending on where you are, you might get one in your Kristalweizen. We just went ahead and used ’em. Lemons are a nice flavor. Lemons are a nice flavor enhancer. I had my cesar salad today I threw in a wedge of lemon. Fish, lemon. It works to bring out the flavors of food. Cascade hops are very citrusy on their own. So I think that beer is good food. Lemon is a food flavor enhancer. It’s always served on the lip of the glass. The way I do mine, is I just rub some around the rim (demonstrates)…That’s the way I personally like (my hefeweizen). I see a lot of people squeeze it in. For me, that’s too much. It’s like how you drink a margarita.  That kind of thing. That way, it gives you a little citrus as your first drink. It’s personal preference. I’ve seen people put orange in it now because of the who Blue Moon thing. But honest, I think what’s going on there is there is a lot of orange and it is then a sweet alcoholic beverage.

What do you think about putting grapefruit in a beer?

RW: For me, if it tastes good do it. My uncle puts salt in his beer. And, I know there are folks in the hispanic community who use salt and Tabasco, and you know what…it’s pretty good. Here at the bar, a lot of our employees make a lot of cocktails by blending different beers. Whatever. It’s all about personal taste. There are no rules. If someone wants to use grapefruit, lime, bananas…whatever…if that’s what they like.

What is behind the name and the history of the “W” Series beers? I have heard people likening those to George W.

RW: We used that before those bumper stickers started showing up. So, we thought about suing them. “W” is our logo, but it was funny that there was this outcry. There’s still some people…actually, I don’t know if we got any calls on this last run…but there were people who were just irate and there was no convincing them. They thought it was some sort of conspiracy. 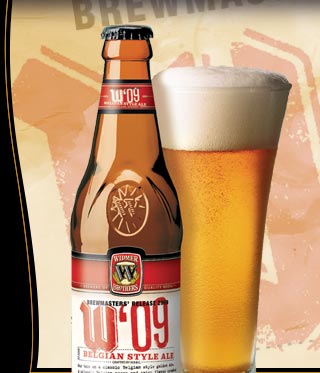 Did it sell better in the red states?

RW: That was the funny thing. Boise is really conservative. I was thinking “We’re gonna get spanked in Portland, but somewhere it’s got to work in our favor.” Nothin’. My own sister was hammering on us. There was so many people who had a problem with the former president. There was a guy I was talking to on the phone. He was an attourney-a smart guy. He had heard that part of our proceeds were going to the Republican party. You can check, Kurt and I are both registered Independent. I finally got the guy to believe that I was not lying. We used “W” first. We’ve been using it for 25 years…23 years at that point. At the end of it, he said (troubled voice) “I’m still not gonna drink it!” He was so angry with what was going on years ago.

It didn’t stop me from drinking it. I was just asking.

RW: It was funny.

How many brewers do you have working here in Portland?

RW: (Counting on fingers) Eight. We just hired one.

How involved are you in brewing? Do you ever get back in the brewhouse and get down with it?

Do you get the boots on and…

RW: For us it’s very automated. I couldn’t brew. Today, we were just talking to Andrew Zimmerman of Bizarre Foods (Travel Channel) and we started in the pilot brewery with him. That’s the kind of brewery Kurt and I started on. It’s much nicer now. I can still work on a batch down there. I still have my boots and gloves.

You ever get back to homebrewing?

RW: Not a day since we started this.

You’ve got some pretty funny commercial. I haven’t heard one in a while, but the Lemon Your Widmer campaign and those on the radio illustrate that you and Kurt have a healthy sense of humor. How do these come about? Do you guys conceive any of these ideas or use a marketing team?

RW: We’ve got a marketing team. More and more, so much stuff got too crazy. I am glad to hear it, and I do think I have a sense of humor. We live in this community, too, so we want to keep our dignity. But the current advertising that we really like, is the one that uses the nostalgic photo. Kurt and I really like it. The cool thing is, is that it has sort of come full circle in that we are always trying to speak to the younger beer drinkers in their 20s and 30s. They can’t relate to this (points to himself), but those pictures they can. The sort of cool thing is that that clothing has sort come back around and what we have found that makes sense was a term that I hadn’t heard until last year: quarterlife crisis. There’s so many twentysomethings who have gone to school and are like “Crap, I took the wrong thing. Now what do I do with my life?” It’s kind of what Kurt and I went through. We certainly didn’t call it that back then. So people know what I’m getting at. It does seem that are story is meaningful because a lot of those folks are wondering what they’re going to do and may be thinking about taking a risk and following their hearts. We’re fortunate enough to have done that and it worked out.

Ok, last two quick questions.  Do you know any good beer jokes, or any good jokes in general?

RW: My best joke really isn’t a beer joke. Do you want to hear it?

RW: So…there’s this German WWII fighter pilot who is retired, being interviewed. He fought for the allies. He’s being interviewed on this talk show. The talk show host asks him to describe the most terrifying dog fight that he was ever in. So, he gets this far away look in his eyes and he says (in German accent) “I remember the day like yesterday. There we were…flying in cloud formation. When we flew out of the clouds, there they were! Fokkers to the left of us!  Fokkers to the right! Fokkers above and fokkers below!” Talk show host goes “Excuse me for a moment. I just have to clarify for the audience that a fokker is a WWII fighting aircraft.” The man says “yes, but these fokkers were Messerschmidts!”

RW: Well…to keep living and enjoy the ride. That’s it.

Not a bad goal at all.  Thank you, Rob for taking the time to conduct this interview, and for the fokker joke. Join Widmer brewers at Saraveza on May 8 from 6PM-8PM for a Quarter Century party featuring the original Alt on tap as well as the ’84/’09 Alt in limited bottles. 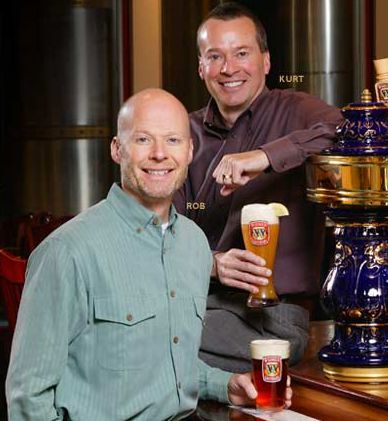