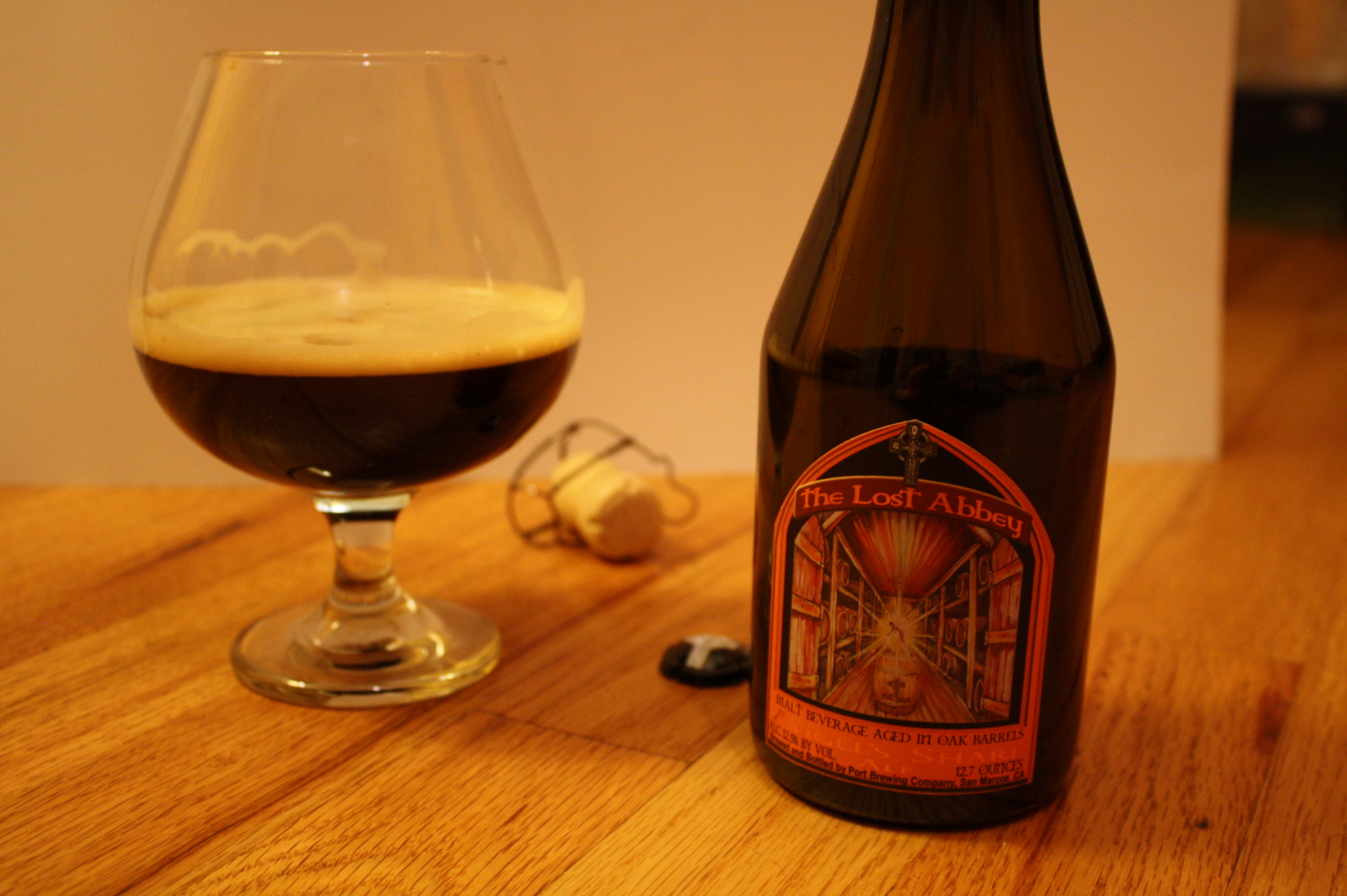 Ok, so not every weekend can be a wild craft beer drenched adventure. We most certainly strive for that goal, but sometimes the old body just won’t concede, and it’s good to take a break here and there. Following a three

day no-beer detox due to a string of allergies and cold-like symptoms, I figures I’d hang my beer shoes up for a spell and drink a grip of H2O, juice, tea, and nurse myself back to beerdom with some homemade veggie soups. Most of the weekend’s activities consisted of yard work and movie watching from the couch. However, being a beer nut, I did get to include craft beer in my schedule to a degree. After clearing a strip of land to the north of our house on Friday, Saturday involved my pal Jean-Paul helping me install posts for a hops trellis. In an area with a great southern exposure the trellis, now simply two twelve foot posts cemented in the earth will soon become a forum for Cascade, Willamette, Mount Hood, and Centennial hops to reach for the high heavens and aid in our home brewing needs. In addition to the trellis, we also threw up a barrier around our raspberry bushes to keep them from wondering into the driveway. It was a good to get the hands dirty and enjoy the nice mild, partly sunny weather we’d experienced for most of the weekend.

After the ground work for our project was laid, we retreated inside for a couple bowls of Margaret’s homemade barley and bean soup. I even snuck a small pour of refreshing Kona Longboard Lager, that just hit the spot after the afternoon of hammering, nailing, cement mixing, and digging in the dirt.  We finished up around 3 pm and after a quick shower we rushed over to the Hair of the Dog Earth Day Sale to see if there was any chance in hell of scooping up a bottle of Matt, the dark sour brew made to honor Bottleworks‘ Matt VandenBerghe. Unfortunately, we waited to long and the beer, even at $14 for a 12-ounce bottle, was completely gone.

After leaving a little disheartened, we headed over to Belmont Station to pick up some beers for my cousin Wes’s  birthday. My Italian-American family had reservations at Piazza Italia in Portland’s Pearl District to celebrate the event. At Belmont Station, I opted for a mix twelve pack for my cousin, who is a hop head. Recently he had discovered an assortment of DIPAs new to his palate, and I wanted to bring him a selection of some of the best India Pales that the Pacific Northwest had to offer, as well as an obvious choice in the Green Flash West Coast IPA.

After a wonderful dinner at Piazza Italia that included a few bottles of fine Italian red wine (don’t ask for details, I am a beer guy, ok) and an Art Alexakis sighting, we presented Wes with this phenomenal case of hoppy monsters before deciding it was time to cut the bull and get one for ourselves. After finally getting a parking spot by the River Place Brewery, we entered to enjoy a couple glasses of Full Sail‘s Brewers Share

handle known as Kyle’s Broken Paddle IBA. The beer was a deep, ingredient laden black IPA with a citrusy zing and lots of chewy malts to accompany the ripping IBUs. We had been meaning to quaff this brew for about a month since our friend Kyle Larsen had made it. It was hearty and delicious. After returning home, we opened a 2007 Lost Abbey Angel’s Share. This viscous 12.5% ABV bourbony, oaken beast was a great night cap for our relaxing night about town.

On Sunday, I found myself working the beer counter at By the Bottle, Southwest Washington’s premiere beer stop for over a thousand different selections rotating throughout the year. Lots customers came by to get the Oak-age Un*Earthly and Oak-age Cuvee from Southern Tier. I was also please to find a taste a few other beers currently unavailable in Oregon (but not for long): Oskar Blues Mamma’s Little Yeller Pilsner, and the Port and Bend Brewing collaborator beer called Hot Rocks Lager. Brewed by Tomme Arthur and Tonya Cornett, this brew was made in an age-old manner using malten stones that were thrown in the kettle to produce a dark, chewy, hoppy 6.5% brew. I found it a bit ironic that this beer produced by an Oregon brewer is not yet available in Oregon. However, rumor has it that Maletis Distributing will soon introduce the beer into the Oregon market.  A few Canadian folks came by the shop enamored by the presence of Stone Double Bastard in mammoth jeraboams. “I wish we could get this past customs” said the lady. And this is the kind of beer we take for granted here in Beervana.

After five hours at By the Bottle, we made a pit stop at Saraveza to see what was cracking. We were happy to see the amazing Jonathan at the bar as well as the woman who started it all, Sarah Pederson working to get great beer to a crowd of folks geared up to watch another heartbreaking Trailblazers playoff defeat. However, there was nothing but cheer for the wonderous beers on draft this night. A special DIPA, from new brewery Lat 44, served only in half-pint glasses. The beer is a tremendously floral and fruity beast of an IPA brewed at Full Sail Brewing in Hood River. Here is a blurb about the beer, we found on John Foyston‘s The Beer Here blog:

LAT44’s IPA is brewed using ingredients sourced exclusively from the Pacific Northwest, including a balance of premium caramel malts, two-row barley and hops.

A refreshing beer with an aromatic full-hop flavor, every ingredient used in the new LAT44 IPA was carefully selected to yield flavor complexity and a multilayered aroma.

The IPA is the first addition to the LAT44 portfolio and is an all-malt brew with no adjuncts or other grains.

Availability: The LAT44 IPA will be available on tap in select Idaho, Oregon and Washington restaurants, bars and pubs.

About LAT44:
Brewed in Hood River, Ore., LAT44 is a Pacific Northwest beer brand that embodies the spirit, passion and originality captured by the people that call Latitude 44 home. LAT44 is dedicated to using fresh, locally grown ingredients for its flavorful and aromatic ales.

Excellent.  After Margaret and I shared a glass of this and a goblet of Cascade Brewing’s Mouton Rouge (Red Sheep). Wow, what a complex and delightfully tart beer. According to brewmaster Ron Gansberg:

This Northwest style sour red is a blend of barrels with up to 16 months of oak barrel lactic fermentation and oak barrel aging. Dark fruit, sour, oak and funk flavors sweep over your taste buds like an incoming tide. 7.5% ABV, 9 IBU.

At Saraveza, Sarah kindly offered us a pickled plate. For some reason, Midwesterners really enjoy their picked items…and we can taste why. Pickled apples, carrots, olives, and cabbage amongst other items were refreshing a helped to cleanse the palate amidst these hoppy and sour ales. Sarah also gave us a few samples of Samuel Smith‘s latest organic fruit beers: a raspberry ale and a strawberry ale were quite good. There is also word that they have a cherry ale as well. A very nice twist on typical fruit ales, these beers are worth a try, even for those who don’t think they appreciate fruity brews.

After Saraveza, we headed home to witness the end of the Blazers defeat before calling it a weekend. We are looking forward to next weekend and the 3rd Annual Cheers to Belgian Beers event at Lucky Lab.  Stay tuned…