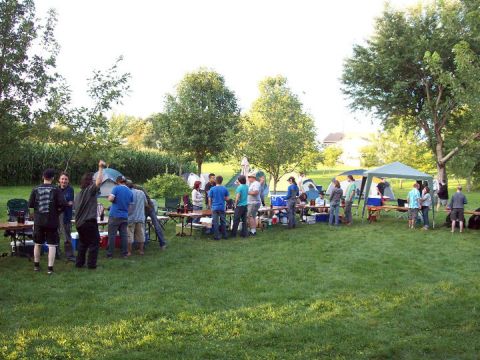 I recently attempt to the 11th edition of le X de 1000, the biggest homebrewer event in Québec. The managers and volunteers did a great job to plan, set up and execute the event. Attendees even received serigraphy glasses. The annual brewing theme was chosen at the end of the previous year. A sweet chaotic and ethylic brainstorming result that our Senators (René Brasseurs Illimités, Jean Brasseurs & Frères and Nicolas Bedondaine et bedons ronds) decided that every style brewed in a previous edition (porter, tripel Belge, IPA, Scotch ale, barley wine, stout, saison, brown and mild ale, trappiste & 10%+) would be considered as an imposed style style imposé for the 11th edition.

Every other beer could be presented as freestyle (style libre) for this very friendly competition. The winner has the privilege to tell everybody that he wins this edition and is allowed to hoist the trophy  for a year. It is also appreciated if he pays to engrave his nameplate on the trophy…

The three Senators officially opened the competition at 14:45 while most of us began to taste at 13:15. They are getting older, so nobody noticed it and we didn’t wait for their benediction to begin the tasting of 46 officially registered brews. Here is what styles we had: imperial stout, saison avec brett, IPA, bière de Noël/+10%, stout, IIPA, trappiste, American stout, barley wine, scotch ale, sweet stout, porter à l’érable, pale ale avec brett, clone d’Orval, lager blonde houblonnée, brune au café, blanche, blonde au gingembre, dopplebock, belgian pale ale, cream ale, vienna lager, bitter anglaise, belgian ale avec brett, lager blonde. There is also a lot of non-registrants, one of a kind, extreme and very limited editions beers that you may taste if you’re at the right table at the right time…

After a pork braised dinner, winners were announced. The first position in both styles (imposé et libre) has been discerned to Étienne Turcotte for a Russian Imperial Stout and a Double IPA. We are all highly anticipating  the opening of their brewery. Congratulations.

On the opposite end of the spectrum, the beer that received the fewest votes won the bottle of bad beer left in the sun during the whole day’s events. This year, this unwanted award has been discerned to Martin Leroux for his quite infected pale ale. He accepted the prize with dignity and shares it with everybody who asks for it, a friendly tradition.

The party ended around the fire, near the tables to empty the leftover bottles, looking for the extreme beers or just going to sleep. It seems that the style for the 11th edition will be pale ales – not too extreme and it will still be a good challenge.

Sunday morning was quick. Breakfast, packing tents cleaning the site and goodbyes. Special thanks to François and Bo for all their devotion and implementation of this homebrewing event. Watch for the announcement of the next edition in August 2011 on www.bieropholie.com.