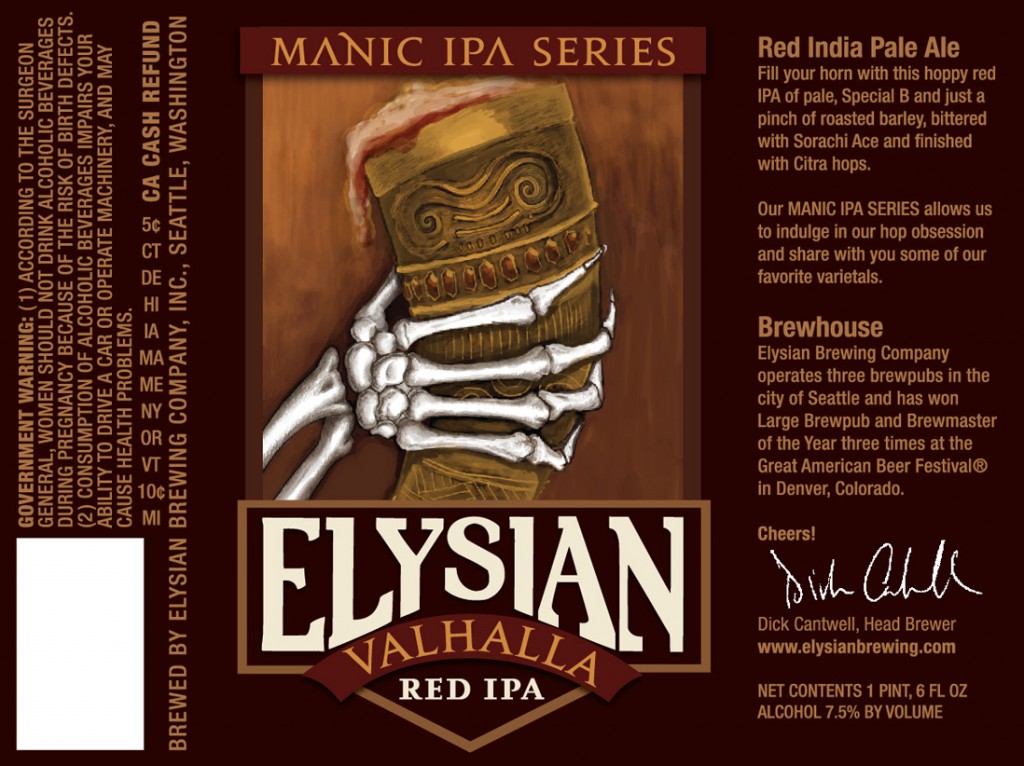 Coming October 2012
VALHALLA – A Beer to Wake the Dead

In Asgard, the home of the Viking gods, battle is one way to spend the day. And after a bout of hewing, hacking and hammering away at one’s brother and sister deities all it takes to spring up good as new is a horn full of ale. Valhalla, the latest in Elysian‘s Manic IPA series, is just such a beer. Distinctive specialty malts add a gory touch to an IPA hopped with rare and precious Sorachi Ace and Citra hops. Its unique flavors and intense bitterness will set your helm ringing and lend vigor to your sword arm.The Manic IPA series gives Elysian’s crack team of brewers the chance to indulge their bitter bone, employing massive amounts of such unusual hop varieties as Nelson Sauvin, Citra and the Sorachi Ace grown exclusively by Virgil Gamache Farms. Elysian was one of the first US breweries to check out Sorachi Ace, back when the Gamaches had grown only three plants. It has made its appearance in such other Elysian favorites as Konishiki, Loser and Yuzu’s Golden Ale. It lends a resinously tropical note to any beer it touches.

Valhalla brings the tradition of the drinking hall of the Norse gods to selected taverns, restaurants and stores in the Northwest, Colorado and Elysian’s East Coast markets. Available on draft and in 22-oz. bottles, Valhalla will gird its fans against the shortening days of fall and on into winter.