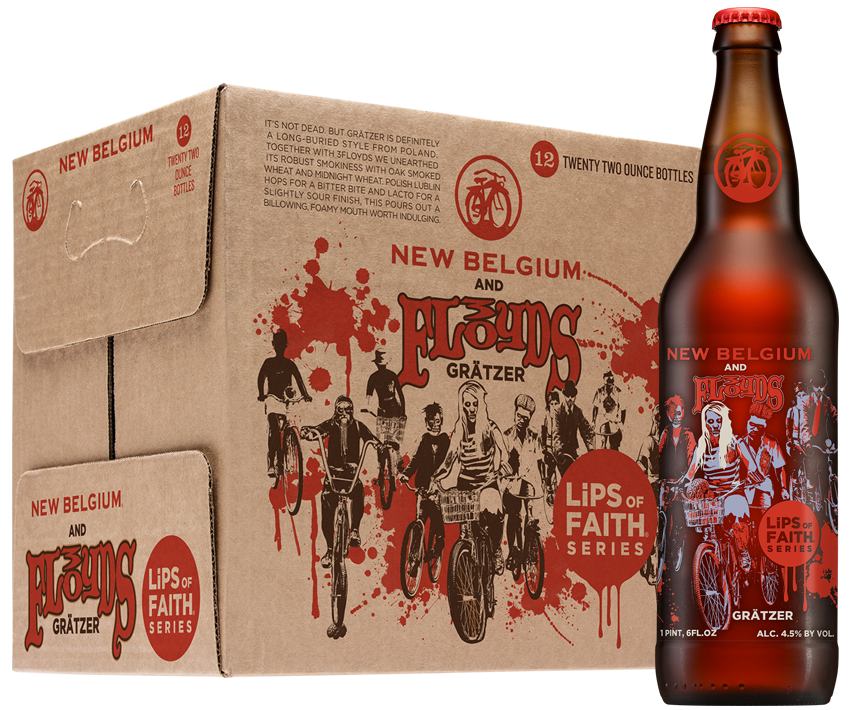 Ft. Collins, Colo., – June 17, 2014 – 3 Floyds, a small brewery in Munster, Ind. with a big reputation, and New Belgium Brewing, the third largest craft brewer in the U.S., have partnered to create Grätzer. This bold-flavored ale brings back to life the long-buried Grätzer style from Poland, which primarily uses oak-smoked wheat. This collaboration beer also incorporates Midnight Wheat malt, which provides a mild sweetness. It pours pure black and has a subtle, spicy note from Polish Lublin Hops. At 4.5% ABV and 30 IBUs, Grätzer is sessionable and has a nice, light body, despite its dark appearance.

“The beer turned out really refreshing and the tartness complements the smoke and makes the whole drinking experience harmonious,” said Chris Boggess, Head Brewer at 3 Floyds. “We’re also excited about the label art. We tried our best to push for some gruesome artwork and the label is pretty brutal – gooey brains and zombies!”

“We definitely had a fun time partnering with them to create Grätzer,” said Lauren Salazar, New Belgium’s wood cellar manager and sensory specialist. “3 Floyds is in the heart of the Midwest and although they have limited distribution they are known far and wide for some amazing beers, so it was an honor to partner alongside them.”

Grätzer is available now through September, while supplies last, in 22-ounce bombers and on draft.

To find New Belgium beers near you, visit the libation locator at http://www.newbelgium.com/beer/locator.aspx.