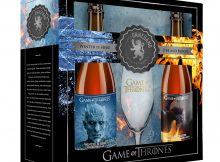 Beer releases
Though Game of Thrones returns for its seventh season to HBO on July 16th, Brewery Ommegang will release a new beer for this season later this year in
Read More